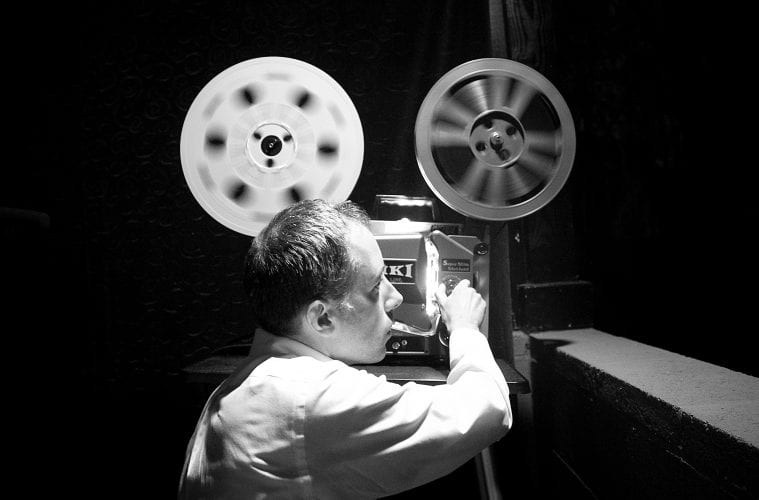 For almost 16 years, Film Love curator Andy Ditzler has worked to preserve an adoration of film through an increasingly digital age.

“I wanted to access films only available on film prints,” says Ditzler, who started FilmLove in 2003. “I wanted to see certain films not otherwise available. I figured that if I’m interested, other people might be interested, so I thought, ‘Let’s do it in public!’”

Ditzler launched Film Love with a series on the Beat Generation authors at Eyedrum Gallery in Atlanta.

“The first was Pull My Daisy, a fictional film in which Allen Ginsburg, Jack Kerouac and Gregory Corso were effectively playing themselves. They’re a popular subject, so it was standing room only for the first show. It was an auspicious sign that there would be an audience for this work.”

“Self-Obliteration is a really interesting document in many ways,” Ditzler says. “It includes activity of her painting, filmed partly in one of her mirror rooms. It’s a beautifully edited and shot film, and a very explicit statement of free love and transgression.”

Over the years, Film Love has plumbed the depths of film catalogs and archives for other avant-garde and experimental work, as well as more obscure documentaries. Ditzler has screened films from Andy Warhol, Yoko Ono, Luis Buñuel and Kenneth Anger.

He says that he’s particularly attracted to films that treat the art form as a visual medium, not a verbal one.

“If you think about mainstream films, even a lot of documentaries, they usually begin with a script that goes through a revision process. They’re voiced by actors. They’re promoted and critiqued using words — they never leave that verbal realm. Most of what I show is by filmmakers who weren’t necessarily interested in pre-scripting what they did. They treat the visual as primary, rather than the verbal.”

In 2019, Ditzler will partner with the High Museum again for a retrospective called “Film Love at the High.” The series kicks off January 17 and features monthly screenings through May.

“We thought it would be good to see some programs we’ve done in the past that are very accessible and exciting to audiences,” Ditzler says. “I’m mixing and matching some different programs that I’ve shown before to put them in a new light.”

While some of the programs are still being finalized, Ditzler plans to devote the January show to Joseph Cornell, an American artist and filmmaker influenced by the surrealist movement.

“He started in the 1930s by making movies edited together from previously existing films. He’d buy films by the pound and found amazing things from the early years of cinema that he edited into beautiful constructions.”

In the years since Film Love began, monolithic streaming sites like YouTube have become popular, but Ditzler says that they’ve had less impact on his series than he expected.

“It’s interesting how often something I show is not available on YouTube. There’s a lot of stuff that’s not profitable enough to digitize. And a lot of the copies are really bad, which really hurts things like avant-garde film.

“When YouTube became popular,” Ditzler adds, “I said to a friend, ‘Gee, there’s no more need for what I do if it’s all out there.’ They said to me, ‘We need curators now more than ever because we have this morass of images to deal with, so we need someone knowledgeable to be our guide.’”