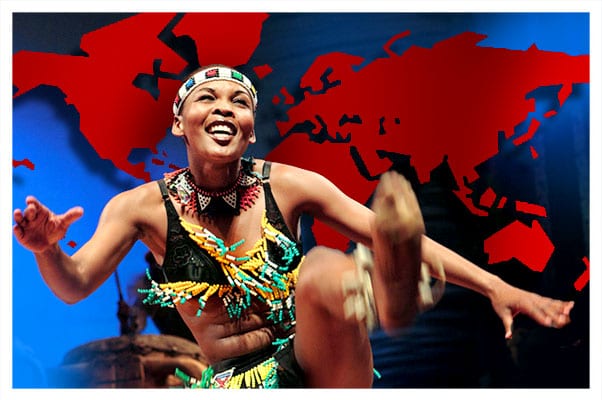 What started in the 1990s as an effort to get kids off the streets of Soweto and Johannesburg, and teach them South African dances, has grown into Africa Umoja, an internationally touring production that sweeps through South Africa’s history using the traditions of storytelling, drum talk, dance and song. Presented to honor the late South African President Nelson Mandela’s 100th birthday year, and celebrating the 10th anniversary of Atlanta’s Porter Sanford III Performing Arts and Community Center, the production will run at the DeKalb County venue through November 5.

The project started with Todd Twala and Thembi Nyandeni, who traveled the world in the 1970s and 1980s with the musical production Ipi n Thombi and wanted to give similar opportunities to underprivileged kids like themselves. They developed Africa Umoja from a community outreach program into a musical show that took off after a major performance in London in 2000, followed by a three-year West End run. The production has since traveled to more than 58 countries and had a successful run at Atlanta’s Rialto Center for the Arts at Georgia State University in 2014.

The word “Umoja” means “together” in the Zulu language. Twala and Nyandeni chose the title to symbolize the struggle of South Africans to find a way to live together in cooperation and respect. Using tribal, jazz and gospel music from different regions of South Africa, a youthful cast of about 34 South African performers introduce their country’s early history, explore Apartheid and end with today’s modern musical influences — including songs by Miriam Makeba and Hugh Masekela. This specific performance includes a song written by Allen Simone that is dedicated to Dr. Martin Luther King, as well as a piece that celebrates Nelson Mandela, written by Paul Hone.

In keeping with Twala’s and Nyandeni’s mission to empower underprivileged youths and expand their opportunities, Africa Umoja will offer master classes at local schools and daytime performances especially for students.

With songs and dances that were passed down through many generations, Africa Umoja is both a history lesson of South Africa and a tale of hope and overcoming adversity. There are certainly parallels to be drawn between the Civil Rights Movement here in Atlanta and in the United States and the fight for equality in South Africa. “We hope that they gain the experience of learning the true African story being told by Africans, instead of learning it from the Discovery Channel or as told by Google,” said Gregory Mkhabela, the narrator of Africa Umoja. “It’s important that we tell our story as it was taught from our great great grandfathers. We want them to hear it directly from us.”