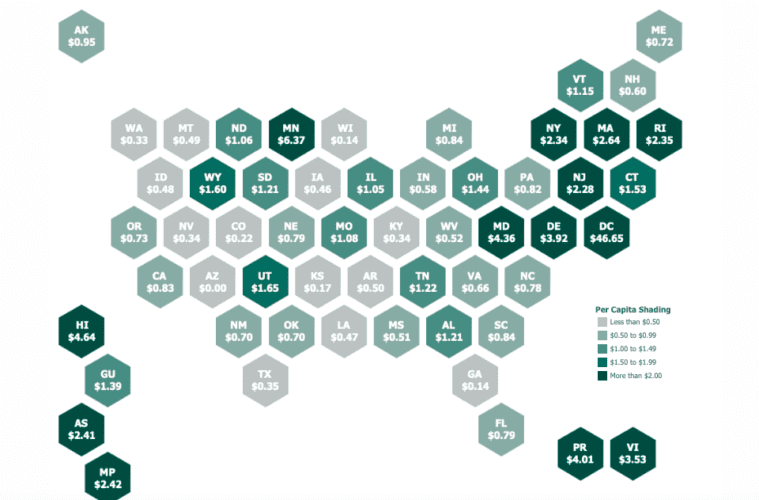 At 14 cents per capita, Georgia is tied with Wisconsin as next to last in public funding for the arts. (Courtesy of the National Assembly of State Arts Agencies)

The state of Georgia barely spares a dime per citizen for arts and culture, trailing all but one state. To raise value and support, Georgia artists need to become more active with laws and policies that affect them.

This was the rally cry earlier this month during a virtual Arts Action Summit hosted by Georgians for the Arts, an advocacy group. The two-day event drew 40 people, with representatives from multiple Atlanta arts organizations, including the Atlanta Symphony Orchestra, Out on Film, Actor’s Express, Aurora Theatre and the Center for Puppetry Arts.

The group is taking its message to the 2021 session of the Georgia General Assembly, pushing for legislation that would offer more substantial financial support to the arts.

“For too long, the creative sector has been told to limit what is possible, and we have listened to this and internalized it and responded by expecting and demanding less,” said keynote speaker Gabrielle Mertz, an artist and public policy adviser to Stacey Abrams. “We thought if we just limit what we ask for, the bare minimum, maybe we could survive to fight another day. Well, that day has arrived. Let’s go forth and create change together.” Arts advocates took their message to the Georgia Capitol during the 2020 General Assembly in an event called “Cultural Capitol 2020.” (Courtesy of Georgians for the Arts)

“Alabama spends more money, Mississippi spends more,” said Julie Young Wilkerson, Georgians for the Arts vice president and Macon Arts Alliance executive director. “We spend 14 cents a person and it should be one dollar, which is what the National Endowment for the Arts is advocating for at the national level.”

The arts and culture sector returns $24.4 billion to the state’s economy, representing 4.3 percent of the state’s gross domestic product and 151,683 jobs in 2017, the most recent year for which statistics are available according to the U.S. Bureau of Economic Analysis.

The pandemic is a critical time to fight to protect state funding needed for the arts to rebound. If Georgia arts supporters don’t get busy contacting lawmakers, they could lose what small amount they have, said Patrick Kelsey, a SCAD business professor and president and CEO of Georgians for the Arts.

“Every industry has been impacted by the pandemic, and the last one to rebound is going to be arts and culture because of the nature of the product,” Kelsey said. “Because arts and culture drive tourism, the state needs to keep us sustainable and strong and keep investing in Georgia Council for the Arts and other pro-arts small-business solutions. The short of it is that if things don’t get better fast, we won’t have the philharmonic or jazz festivals. Those can only last for so long without help.”

Call to action for the arts

Nationally, arts organizations are critical to helping the economy rebound from the pandemic, said Pam Breaux, president and CEO of the National Assembly of State Arts Agencies. “If the arts economy stands up, then we help create a better comeback for other sectors, too,” she said.

Finding people to stand up has been challenging in Georgia. Georgians for the Arts needs at least 24 volunteer captains to lead political action in each of the state’s 14 congressional districts during the National Arts Action Summit in April.

“No matter where you live in Georgia, most artists and volunteer arts organizations are completely removed from what is happening around them,” Kelsey said. “Unless you are part of an arts organization with paid staff, you are probably someone who says, ‘Oh that’s advocacy, we don’t do that. We’re artists.’”

To educate and inspire action, Georgians for the Arts is adapting the national advocacy playbook from Americans for the Arts’ Arts Action Fund. The summit is one part of that strategy. The group plans to use mobile marketing tools — VoterVoice and BillTrack50 — which will allow Georgia arts advocates to contact their local lawmakers quickly by plugging in their ZIP code as well as see legislative details. Patrick Kelsey, president of Georgians for the Arts, began to advocate for the arts when he lived in New York City.

Several bills introduced in the Georgia Legislature will or could affect funding for arts organizations.

House Bill 226 would extend the sales tax exemption for ticket and admission fees to fine arts performances or exhibitions. If the exemption is not continued, organizations will have to collect sales tax which means higher admission costs for ticket buyers.

“Given the current economic environment for arts and culture, I would say that it’s not a particular good time to increase prices,” Kelsey said.

Atlanta Ballet, for example, this week sent an email blast in support of the legislation. The exemption, which expired in July, has provided the ballet with nearly $400,000 of value each year. “This tax exemption is even more important today as Atlanta Ballet and other nonprofit arts organizations attempt to recover from the devastating effects of the pandemic,” the email said.

House Resolution 30 proposes amending the state Constitution to authorize casino gaming. If casino legislation finds traction after years of failure, Kelsey’s organization plans to call for a portion of any casino tax revenues to indefinitely fund the state’s main public arts agency: the Georgia Council for the Arts, which is part of the Georgia Department of Economic Development.

Kelsey began volunteering as an arts advocate while working in New York theater. After coming to Savannah a decade ago, he paid attention when Chatham County proposed cutting arts funding and helped form an alliance that kept the cuts at bay.

Dismayed that no statewide entity was advocating year-round for arts funding, Kelsey got more involved with Americans for the Arts and the National Assembly of State Arts Agencies .

In 2019, Georgians for the Arts was established to provide resources for the growth, prosperity and sustainability of arts and culture in Georgia. As a 501(c)(4) nonprofit, it handles advocacy activities that ArtsGeorgia had been doing since 2013.

Advocacy for the arts involves creativity, too. Kelsey said other funding ideas include a special license plates for the arts or a checkbox on Georgia state tax returns for a small donation to the arts.

“Every license plate already displays a sampling of art, but no plate specifically highlights art,” Kelsey said. “I’m more of a cat person, but if you can give a dollar for helping cats and dogs in Georgia, why not the arts?”voter