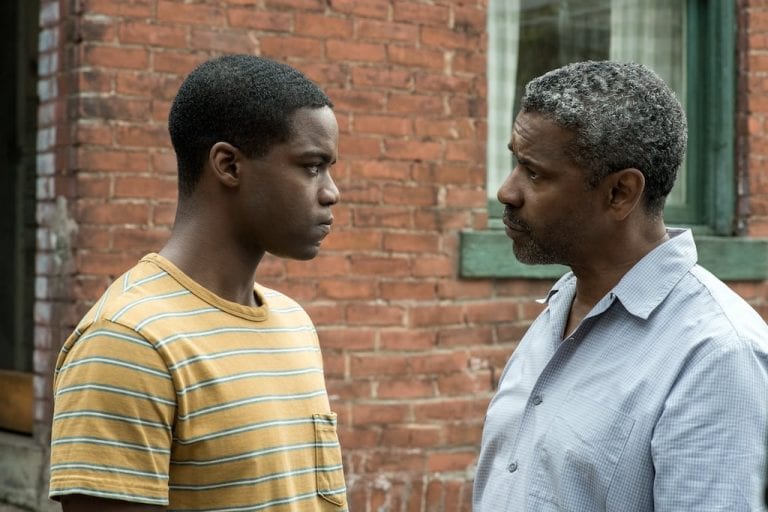 Adepo says he pulled from his own experience to play Denzel Washington's son in Fences.

For the actors of “Fences,” bringing August Wilson’s classic to film was a teaching moment

As a playwright, August Wilson amassed a career of work that explored the issues of race relations and the African-American experience, most notably in his 10-play Pittsburgh Cycle. That series of dramas included Fences, one of his most acclaimed works — the winner of both a 1987 Tony Award and Pulitzer Prize — and a feature film directed by Denzel Washington. Now playing at area movie theaters, Fences reunites most of the cast from the 2010 Broadway revival.

Actors Stephen Henderson, Mykelti Williamson and Jovan Adepo were in town recently for a screening of the film. Williamson and Henderson were in the Broadway revival that was directed by Atlanta’s Kenny Leon, along with Washington and Viola Davis, while Adepo is new to the team.

Retaining the play’s focus on character, Fences stars Washington as Troy Maxson, a former baseball star, circa 1950s, who is now working as a trash collector to support his family and still bitter over the way he felt he was treated as a player at a time when the color barrier was still very real (while Jackie Robinson broke the ban on Black players in 1947, teams still were reluctant to add more than a couple of African-Americans to their rosters). Troy is constantly at odds with son Corey (Adepo), who wants to play football. Troy’s relationship with his wife Rose (Davis) is often rocky as well. Henderson plays friend and co-worker Jim Bono, and Williamson is Troy’s brother Gabriel.

Although Wilson passed away in 2005, he had written a screenplay for a possible film version and Washington had longed to bring it to the screen. Williamson likes the fact that a movie allows for more naturalism than the stage can. “With film you can be more intimate; you don’t have to project to reach people in the back row,” he says. “You can be conversational. That was the adjustment.”

A film version also allows a director to adjust the point of view. “With a play, the audience controls the focus,” Williamson says. “Maybe they’re watching their son, their daughter, and they can miss a plot turn or some behavior. With the film, Denzel puts the focus where it needs to be. It lowers the possibility of missing (something).”

For the most part the film was shot in sequence, which helped the actors considerably, as did shooting in Pittsburgh. The cast was receptive and respectful of Washington’s decisions. “He is wonderful,” says Henderson. “We could not be in better hands. He really knows the craft and has made films and respects this. There is a Zen to it. He says as much as he needs to. He trusts us so we trust him.”

Williamson describes the filming succinctly; he recalls that his co-star Russell Hornsby, who plays Troy’s other son Lyons, had a phrase for the shooting — “love on a biscuit.”

Although a relative newcomer, Adepo holds his own here, especially in scenes with Washington. As nervous as he was going in, he was inspired by the material. “August Wilson lays a foundation,” he says. “Everything is in his work. All you have to do is trust in it and abide by it. As for me, I used prayers and got support from the cast. They were a family before I came and they welcomed me with open arms. I was intimidated by these artists and their experience, but they made me feel comfortable in my own skin.”

The actor had a similar relationship with his own father as depicted in the film, although it wasn’t as severe or as aggressive. “Every young man wants to prove himself and find his purpose and make his father proud and respect his wishes,” Adepo says.

The 2010 Broadway revival production was directed by Leon, whose True Colors Theatre Company has a history of producing Wilson plays. The crew saw Leon recently at a Los Angeles screening and brought him onstage afterwards. “Los Angeles went crazy,” says Henderson. “He gave us his love and respect. He loved what we did.”

Williamson — known for roles in Forrest Gump and Justified, among others — has long been taken by Wilson’s fully dimensional female characters. Rose, for instance, refuses to be a doormat in the family. “For me, I would say one of the things I have taken is the strength of women,” he says. “Women can be stronger than men any day of the week. If you read August Wilson and pay attention to what he puts on the page, you know that is absolutely true.”

A Wilson veteran himself, Henderson has his own views on why the playwright’s work has remained so potent. And so timeless. “This was built like a pyramid, built to last,” he says. “He really did craft it and structure it based on such fundamentally human things. All the great playwrights come from their cultural perspective. He is speaking to the whole world about the human condition from his cultural perspective. It does hold up.”

For Henderson, part of Wilson’s talent was to etch education with entertainment. “August has laced this with meaning for Americans, so subtlety, so wonderfully, that you will keep learning from it, like all great works,” he says. “When you are a young person you see Hamlet one way and when you are older you see it a different way. Classics are classics because they always have something to teach us, not because they are old.”