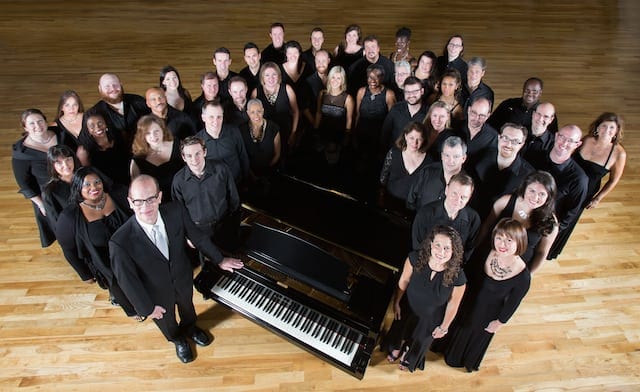 Huff with the Atlanta Opera Chorus. (Photo by Jeff Roffman.)

Walter Huff, the long-time chorus master for the Atlanta Opera, has resigned in order to focus on his tenure process at his second job as associate professor of music at Indiana University.

Huff joined the Atlanta Opera in 1988. Highlights of his tenure include performances at the Cultural Olympiad concert series in 1996 for the Centennial Olympic Games in Atlanta and over 20 performances of Porgy and Bess in 2008 at the Opéra-Comique in Paris and on tour in Spain, Normandy and Luxembourg.

Huff, who also worked as the opera’s rehearsal pianist before starting his tenure as chorus master, is certainly one of the city’s most stable behind-the-scenes creative forces. He has mentored and prepared Atlanta singers for over 110 main stage opera productions in his time. This was especially significant for the Atlanta Opera as it hopped around from venue to venue — from the Alliance Theatre to Symphony Hall, to the Fox Theatre, to the Boisfeuillet Jones Atlanta Civic Center — through good times and bad, before settling into its current main-stage home at the Cobb Energy Performing Arts Centre.

Huff says he is grateful for his long tenure at the opera. “I want to thank all of the chorus members who I had the honor to lead for the past 28 years,” he says. “I am confident that the Atlanta Opera will continue to build great programs and deliver world-class performances.”

Officials said a national search will be conducted to fill the position, and that a new chorus master is expected to be announced in the summer.