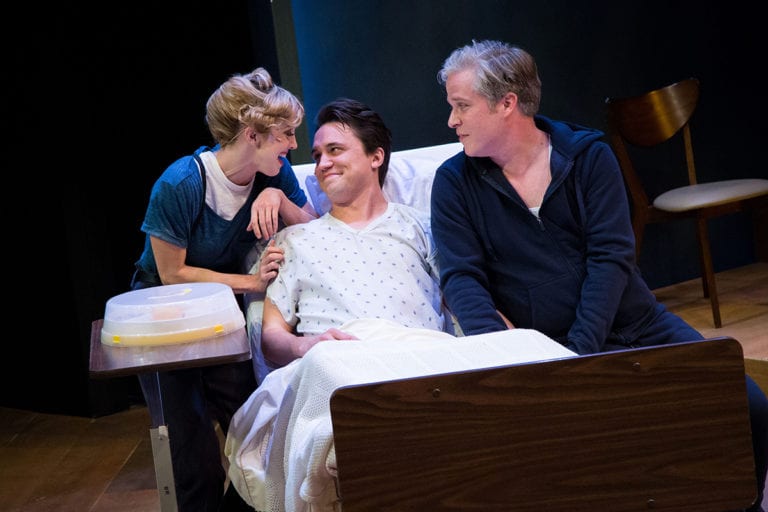 The musical Falsettos has been dusted off and rediscovered, with a New York revival three years ago, a recent national tour and a filmed version that played in select theaters. Actor’s Express is currently staging the groundbreaking show running through April 28. The company’s version never reaches its full potential but is nonetheless agreeable and often moving.

Written by James Lapine and William Finn (who also handled the music and lyrics), Falsettos is a vocal challenge for its seven-member cast. What began as three separate one-act musicals in the late ’70s eventually morphed into Lapine and Finn’s Falsettos. Comprising two parts, “March of the Falsettos” and “Falsettoland,” the musical opens in 1979 and then springs ahead two years later when the Reagans are in office.

Act I introduces us to most of the characters. Marvin (Craig Waldrip) has become involved with Whizzer (Jordan Dell Harris), leaving his wife Trina (Jessica De Maria) and 10-year-old son Jason (Alex Newberg on the night I attended, alternating with Vinny Montague). That creates plenty of anxiety for Trina and Jason, who wonder if Jason will wind up gay as well. To navigate this new terrain, Marvin confides in his psychiatrist Mendel (Ben Thorpe), who eventually begins sessions (and a relationship) with a stressed-out Trina. Other characters who pop up in the second act, which is a bit darker than the first, are internist Dr. Charlotte (Kandice Arrington) and caterer Cordelia (Kylie Brown), a lesbian couple who befriends the others.

The original Broadway version opened in 1992 and took home two Tony Awards — Best Original Score and Best Book of a Musical. The 2016 staging, starring Christian Borle, Andrew Rannells and Tracie Thoms, was nominated for Best Revival of a Musical.

The musical has a lot in common with Angels in America, which the Express produced last year. Falsettos was groundbreaking in its initial run, dealing with gay and lesbian characters, the notion of extended family and the onset of AIDS. Both shows are complex, perhaps a little too much so, and while they can feel dated, they manage to feel relevant.

I’ve always liked Falsettos for its ambition and strong characters. Young Jason is approaching his bar mitzvah time while processing changes at home, and the older men are growing up in different ways as well.

The musical’s widely heralded score is pretty irresistible, even if I’ve always found that a few numbers seem out of context and, at such a rapid pace, others seems inseparable.

Directed by Freddie Ashley, Express’s artistic director, Falsettos is cast precisely and has some genuinely touching moments near the end. This version of the musical is nicely sung, with standout numbers by Waldrip, De Maria, Harris and Arrington. “I’m Breaking Down,” one of this show’s more memorable numbers, finds Trina trying to sort out her identity without Marvin in her life. “Something Bad is Happening,” performed beautifully by Arrington’s Dr. Charlotte, looks at how a new disease is starting to decimate gay men in the community. The numbers generally sound great, thanks to music director Alli Lingenfelter and musicians Devante Singletary, Devin Poter and Eric Fontaine.

Falsettos can be tricky for its ensemble, who must etch their characters via song, sans any straight dialogue, and without (in some cases) fully dimensional shadings. Its structure can make it tough to really feel for these people. Sadly, there’s more connection between the supporting characters of Dr. Charlotte and Cordelia and even Whizzer and Jason here then between Whizzer and Marvin and Trina and Mendel. As rich and varied as some of the singing is, there isn’t much spark or passion between the leads that would elevate this musical to a different level.

Of all the performers, especially noteworthy are De Maria, warm and confused at a turning point her life; Newberg’s precocious Jason; and Harris’ Whizzer, who isn’t one for monogamy and the domesticity Marvin wants, but doesn’t come across as a complete cad either. Brown and Arrington as also terrific as the lesbian couple, although I do wish they had more presence in the musical.

It may be surprising to some that Falsettos can still resonate today, 40 years after Lapine and Finn staged variations of it, but it does. This version isn’t as top notch as some other Express musicals (The Color Purple, Murder Ballad), or as emotionally accessible, but there’s a lot to like in the company’s staging.