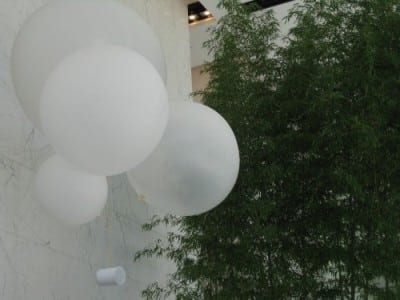 A pair of long rectangular reflecting pools, their surfaces raised barely a foot above floor level, are the most prominent features of the lower lobby of 1180 Peachtree Street, a high-rise office tower (below) in Midtown Atlanta. If one were to enter through the revolving door on 14th Street and cross to the wide staircase ahead of it, or take the reverse path on a daily basis, the routine of passing between the extraordinarily placid pools might make them go unnoticed. They are not splashy fountains. Quite the opposite: you might mistake the water for something solid, like glass, they are so undisturbed and serene.

But, this week, the things one might immediately notice are the weather balloons. Sixteen of them in all, in four clusters of four different sized balloons. Each cluster bears aloft a white gondola tied with yellow rope. Each gondola bears an audio speaker. These aerostats are in turn moored to the bottoms of the pools with a pair of metal tethers, while a third wire, an audio cable, attaches the speakers to audio sources discreetly hidden behind the pools, where there is less pedestrian traffic.

Such is the physical and visual setup for “Sounding Up There,” a sound sculpture by composer and sound artist Roberto Carlos Lange. The installation opened this morning and will remain in place through Friday, June 10. It’s the latest public-space, site-specific art presented by Flux Projects. The artist, who was born in South Florida, studied at the Savannah College of Art and Design and now lives in Brooklyn, will discuss the installation on Wednesday, June 8, from 4:30 to 6:30 p.m.

On the one hand, it is observably a simple installation (weather balloons aside), but suited to the long rectangular shape of the space, and, surprisingly, not visually overstated. The white balloons blend in with the lobby’s cool white marble, metal-and-glass modernism and the tall shocks of bamboo at either far end of the twin pools. A pair of balloon clusters and speakers hover over each pool. The fact that the composer happened to show up during this morning’s observations was serendipitous for me, as he was able to explain a few things not revealed in public promotions. First, Lange points out that, while there are four audio speakers, there are not four discrete channels of sound controlled from one source; rather there are two independent stereo pairs which are not connected to each other. The music is recorded on one-hour loops, which play all day while the building is open to the public. But the loops are not synchronized; rather, they are started a half-hour apart and so are “offset,” as Lange says. The intention is that in each rendition the music is not exactly the same, although the loops are both one hour long. Not surprisingly, given Flux Projects’ support, Lange says he is most interested in the public aspect of the installation, that it is not secluded in a back room of a gallery but is in a transitional space through which people pass in the course of their daily activities. As such, says the composer, the sound acts as an “intervention” between people and the space itself, filling the space with unanticipated sound, thus perhaps causing them to notice anew the lobby space that they routinely take for granted.

Lange has filled the experience not only with a wash of sound but also with noise sampled from the environment of the surrounding city blocks, from musicians warming up to a barking dog. (The office tower is a block south of the Woodruff Arts Center and adjacent to the site formerly planned for a new Symphony Hall.) Lange’s gathered sound crosses paths with everything from long modal tones to punctuated piano chords.

Any building in which music is performed can itself become a musical instrument; that is, it can contribute for good or ill to both the experience of music and a composer’s decisions about what music to write. (This concept goes way back: consider the impact of the acoustically resonant Saint Mark’s Basilica in Venice on the Italian cori spezzi style of polyphonic choral music that peaked in the late 16th century.) The 1180 Peachtree lobby itself imposes a few boundaries to perceptual orientations, due to its long horizontal layout, with mostly in-and-out traffic traversing the short axis and more modest foot traffic along the long perpendicular. For this situation, Lange’s choice of stereo pairs, rather than discrete quadraphonics, is a good one. He observes that this sets up, essentially, a “triangular” relationship between the pairs of fixed stereo tracks and the moving listener as the third vertex of the triangle — and the entire sonic landscape is shaped by the liquid resonance of the room itself. Whether the music overall does what Lange hopes is a different matter, and likely depends on the temperament of the individual observer and the time spent in the lobby. It is a “nudge” toward sound art if people start to notice both sound and balloons as a pleasantly unexpected anomaly in the building. But the installation’s sound level is quite restrained, and the sonic soundscape changes so slowly that it wouldn’t interfere with office workers on a lunch break, seated at café tables at one end of the lobby. Crossing the lobby briskly, you might not even hear that something’s up.

And without any artist to guide us, we are already barraged daily by tumultuous sounds of the streets and by imposing visual displays that rudely demand our attention. Some of us work hard every day to shut them out. The challenge for an artist such as Lange is taking these experiences and re-shaping them into something different — of aesthetic invitation.