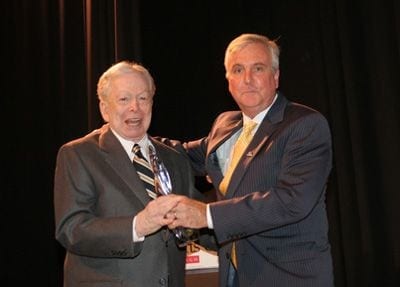 A musical send-off for the late Jennings Hertz, major patron of Atlanta theater

Show tunes wafted through The Temple on Thursday as more than 1,000 people from the business, Jewish and theatrical communities attended the funeral of Jennings M. Hertz Jr. The music was the perfect send-off for one of Atlanta’s most committed theater angels.

Hertz, who died of heart failure Saturday, was “an artistic director’s dream,” Susan Booth of the Alliance Theatre told the crowd. She praised his intellectual curiosity, his championing of risk and his high expectations. He was free with his opinion — an astute critic, she said — but never tried to impose his will.

Like many ardent fans, Hertz’s involvement in the theater was to some degree a vicarious thrill. The former chairman of United liquor distributors, he had given up his own acting ambitions to run his family business, so it must have been a deep pleasure to put his money where his heart was. He was honored at the Woodruff Arts Center’s 40th-Anniversary celebration in October (in photo, left, with the Alliance’s Tom Pechar).

The Alliance’s renaming its Hertz Stage, formerly Studio Theatre, in 2000 made his youthful dreams come true, if not exactly the way he had initially imagined it: when the marquee lit up, he saw his name in lights.