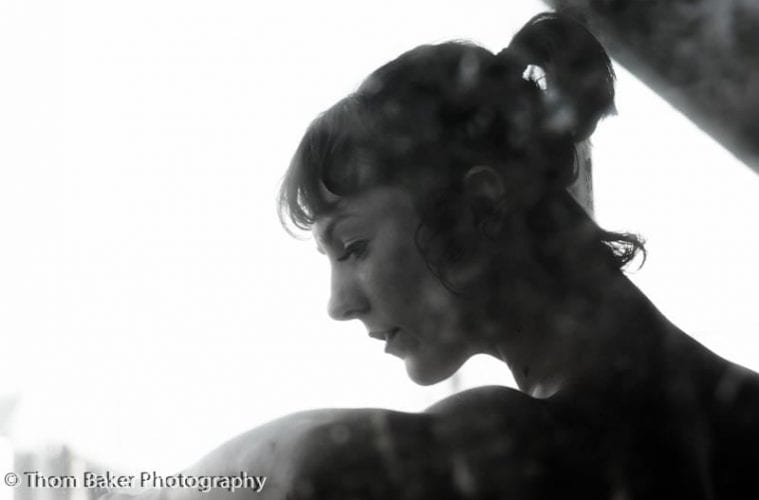 30 Under 30: gloATL’s Nicole Johnson takes it to the edge in order to reach her center 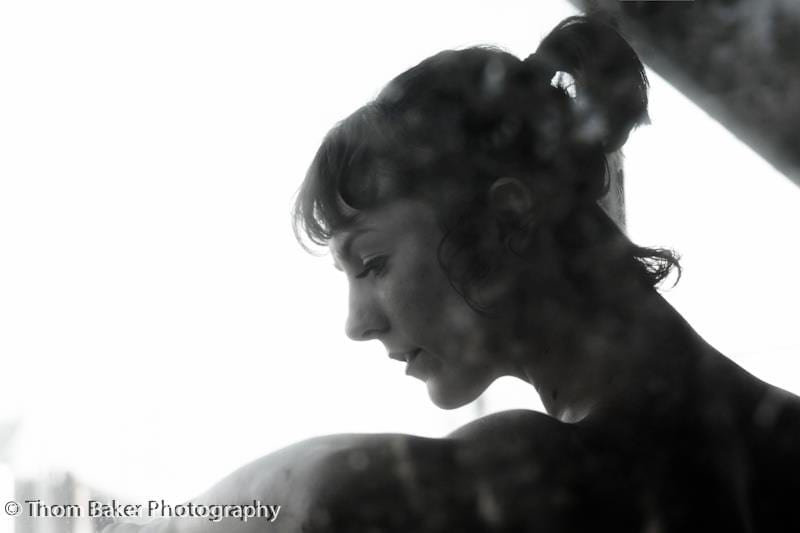 There’s something otherworldly about Nicole Johnson, something enigmatic and intriguing. We meet for tea late on a Saturday night, and the 28-year-old dancer is wearing a layered mint-green dress that seems to hover around her small frame. Tight, dark curls fall around her face, and as we sit down, I am suddenly aware of (and slightly unnerved by) the intensity of her gaze.

A founding member of the dance troupe gloATL, Johnson is known for her piercing focus onstage and in site-specific works choreographed by Artistic Director Lauri Stallings. And unlike most dancers, who turn on and off their performance personas, Johnson’s seems to be innate. As she talks, her watchful eyes flicker and the slight, knowing smile that she so often carries in performance plays on her face. 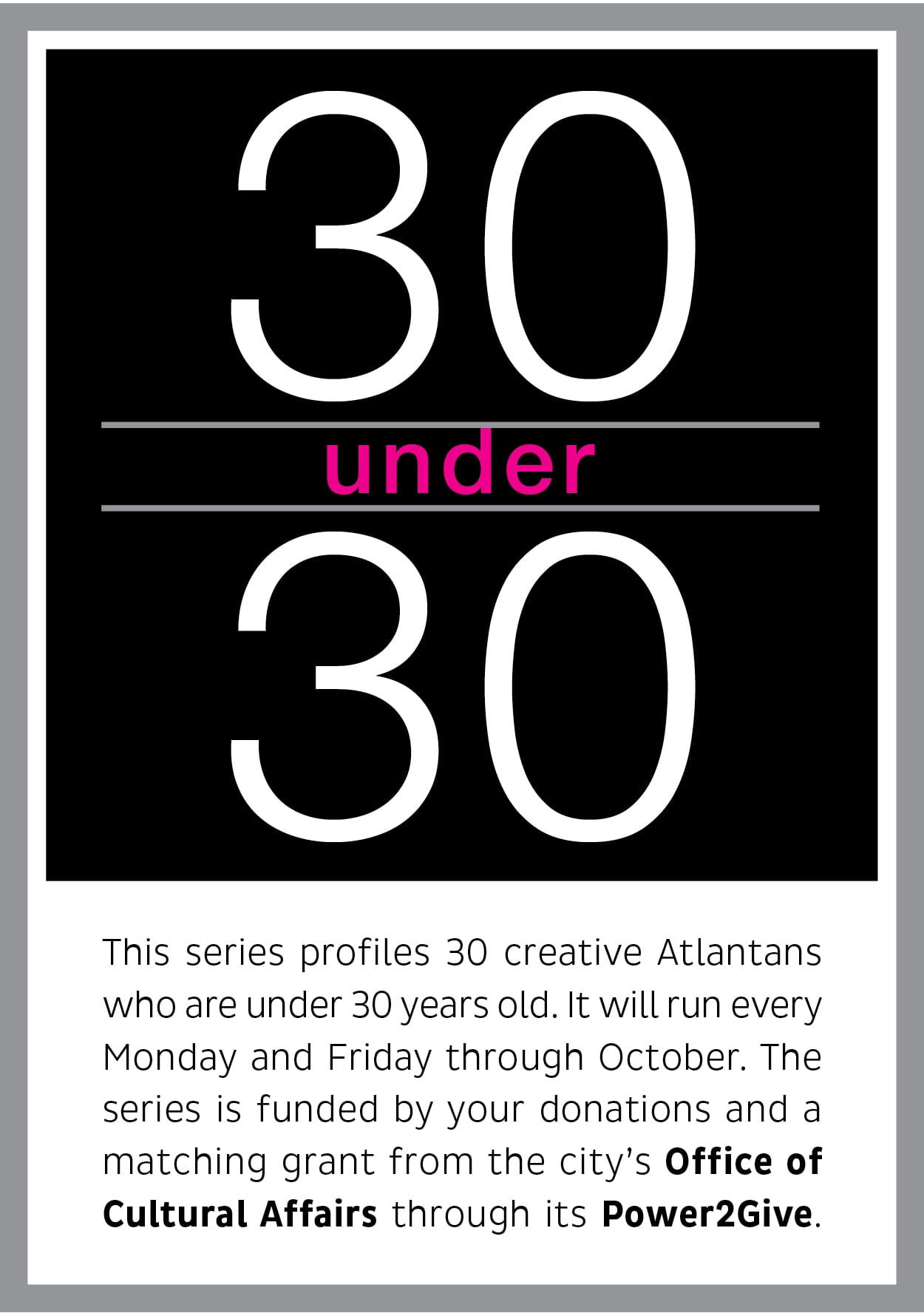 It is easy to imagine Johnson in an experimental, site-specific work here, limbs flying as she deftly navigates her way through the coffee shop’s maze of tables and chairs. It’s not easy to picture the Atlanta native in tap shoes at the small studio in Duluth where she started dancing at age three. By all accounts, she is a dancer who revels in the unconventional, but her studio upbringing, like those of many dancers, was just the opposite. She studied jazz, musical theater and ballet at various studios around metro Atlanta and participated in workshops focused on Broadway-style dance. In 1996, she began training at Atlanta Ballet’s Centre for Dance Education and entered the company’s trainee program while still in high school at the DeKalb School of the Arts.

After graduating in 2003, Johnson enrolled at Georgia State University as a three-quarter-time student and continued dancing at Atlanta Ballet. “I felt it was important to have a degree in something other than dance,” she says, and adds that the Hope Scholarship was a big motivator. At first she planned to major in biology, but quickly switched to history and sociology when she realized the required labs wouldn’t fit into her rigorous dance schedule.

“I didn’t know my place in the dance world,” she says. Growing up, she was considered “the musical theater student” at Atlanta Ballet, and elsewhere she was known as “the ballet kid.” As a result, she always felt a little out of her element and never saw herself as one of the “good” dancers. Even after Atlanta Ballet gave her a company contract on her 21st birthday, she says she was not a typical ballerina.

“I am not a swan,” Johnson says in reference to her role in Atlanta Ballet’s 2008 production of Swan Lake. A self-proclaimed “misfit,” she is grateful for the mentors and choreographers who gave her dancing purpose and direction. She points especially to Atlanta Ballet Artistic Director John McFall, who “saw something special” in her and gave her the opportunity to perform more contemporary works. “I didn’t know what contemporary was until I was 20 or 21,” she says. 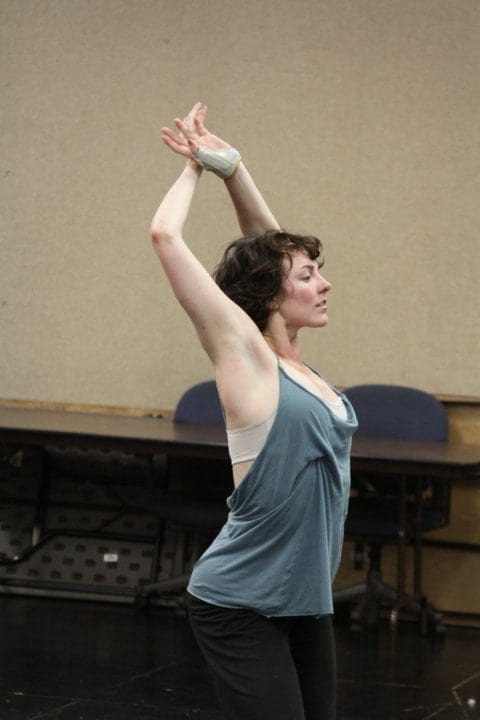 When McFall introduced her to Stallings, then Atlanta Ballet’s resident choreographer, Johnson found a new way of moving that “opened a completely new door,” she says. As she describes working with Stallings for the first time, her words are charged with emotion. Stallings “completely changed my life,” she declares. “And it’s more important than dance. She’s made me rethink my approach to life.”

Stallings’ approach to movement immediately clicked, and Johnson left Atlanta Ballet in 2008 to learn Stallings’ movement style and join her creative process. “We worked for hours every single day with no particular aim. [Stallings] had the time, and we had the time because we had all quit our jobs. After about six months Lauri said, ‘We have to get you guys onstage.’ I think that’s how our first performance evolved.” The group traveled to New York City for a brief gig, then returned to Atlanta for gloATL’s first public performance in 2009.

“I love diving into glo’s projects and learning something completely new about myself,” Johnson says, then acknowledges that the rehearsal process can be challenging. “Not a lot of people can hang and stay with it. I think Lauri sees the possibility in people and won’t accept less than they’re capable of.” She says Stallings is “constantly digging” and finding ways to get her dancers “closer to their own centers.” Says Johnson: “We all do a lot of hiding away from who we are. I don’t think I would have known that I was hiding if it wasn’t for her.”

Perhaps it is the highly personal, often emotionally exhausting rehearsal process that has steeled Johnson for the inherent difficulties of site-specific work. gloATL is known for its performances and “migrations” in various unconventional spaces such as the Atlanta BeltLine, the Historic Fourth Ward Skatepark and Lenox Square mall. Looking back, Johnson says her college history major was a useful entry point into this kind of work. People and place are constant sources of inspiration for her, and she loves to delve into a site’s historical context when preparing for a performance. “Atlanta is such a bizarre city, but it’s a great place to be making art,” she says. She points to the city’s stark class division and the “racial tension we all pretend isn’t here” as fodder for creative expression. 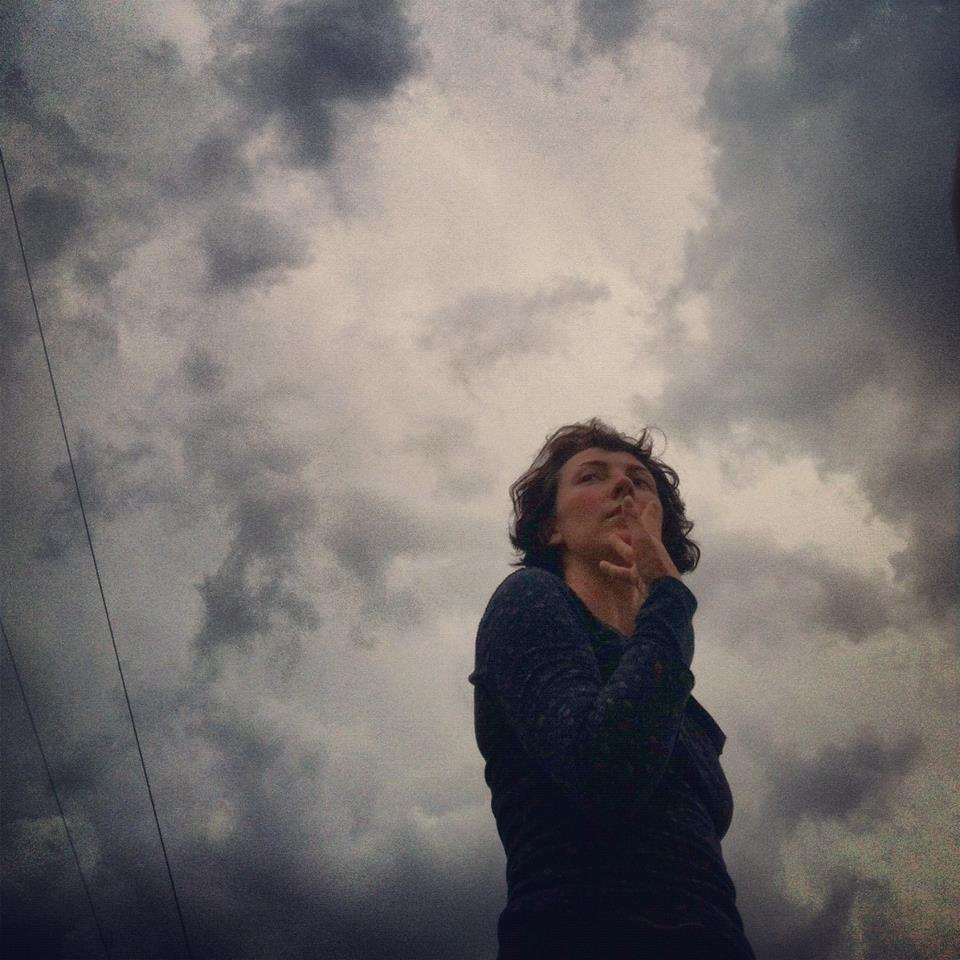 For Johnson, who grew up in and around conventional theater spaces, site-specific performance felt like a revelation. “The first time we did it, I felt so alive and really connected to the work,” she says. She talks about the sense of separation she feels on a stage, disconnected from the viewer. “The intimacy you can create when you have the chance to look someone in the eye . . . I became kind of hooked. It was addictive.”

Eyes — the clarity of a dancer’s focus onstage — are an element of performance that Johnson has learned to value above technical prowess, although she is a gifted technician. She says she loves teaching Stallings‘ movement language but is also developing her own creative voice. As a teacher, the job she calls her “financial security string” when she’s not working with gloATL, she says she likes helping students “find their faces.” She emphasizes texture, subtlety and detail in both her classes and her own choreography. 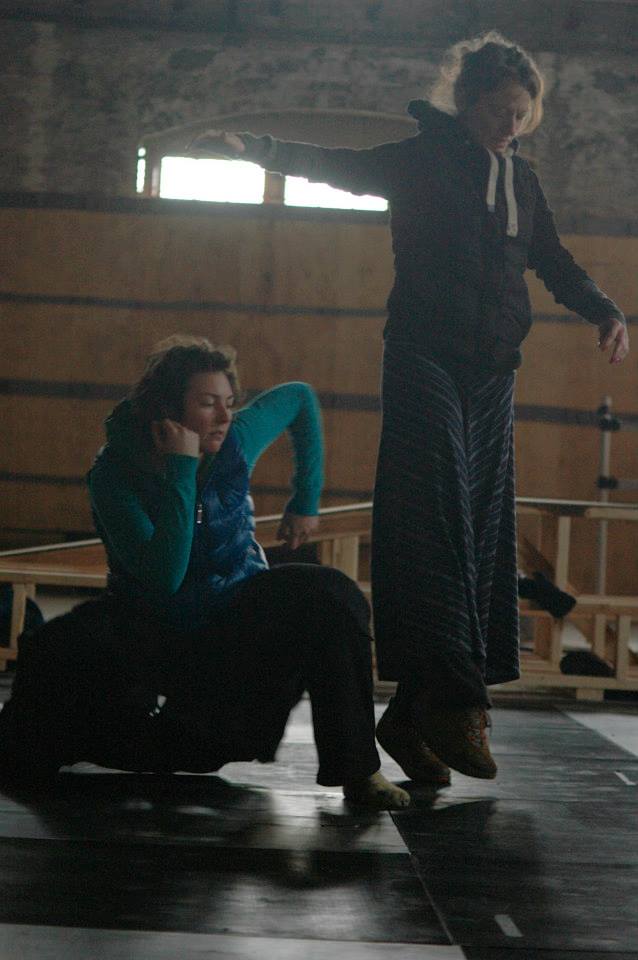 “A year ago I realized I have something to say, but I don’t know what that is yet,” she says in reference to her newfound interest in creating movement. “That’s the first step, I guess.” She says Stallings pushed her to pursue choreographic opportunities, and the young dancer recently set works on Inwood Dance Company and the Kennesaw State University Dance Company.

But Johnson is in no rush to move from dancer to choreographer. For now she’s content to spend her time rehearsing with gloATL and teaching dance, with the occasional break to “run around in nature.” She’s also dating Travis Carroll, the executive chef at Midtown’s trendy restaurant and bar Top Flr, and says they’re constantly pushing each other creatively. “It’s so fun talking to him about creating flavors. He’s the first person I’ve dated who I can talk to about my art.”

Perhaps the connection between food and dance is indicative of a changing cultural landscape in Atlanta. Johnson says that at one point she thought about leaving the city for a more vibrant dance scene but has since changed her mind. She says she senses “a burst of things” and attributes the growth to the many artists who have chosen to live here. “The city is opening up to them. I hope we can keep the momentum.”

If Atlanta is lucky, Johnson will be part of that momentum for many years to come. “I’m going to keep doing what I do,” she says. “It’s an integral part of me; I can’t stop. If I work hard enough, it’s bound to take me somewhere.”