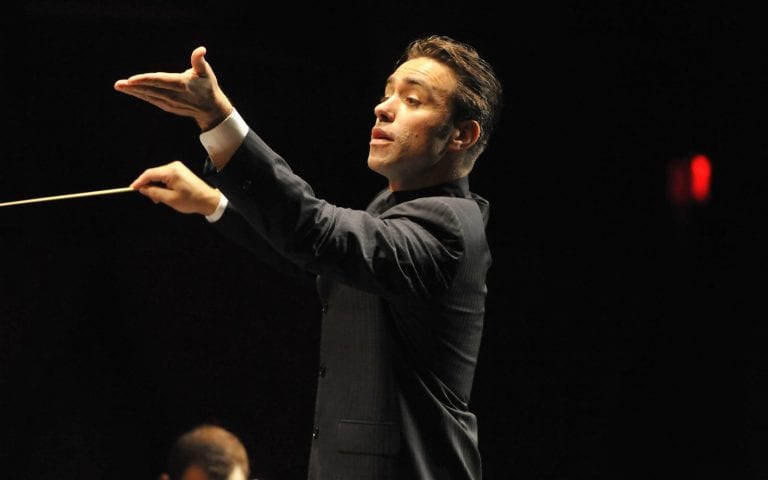 The concert will be repeated once more at Symphony Hall on Saturday at 7:30 p.m., but will also be repeated in two nearby academic locations: tonight (Friday) at 8 p.m. at Kennesaw State University’s Morgan Hall and Sunday afternoon at 3 p.m. at the University of Georgia’s Hodgson Hall.

There were a few signs in the galleria touting the evening as “Spanish Night.” Supporting that premise, an hour prior to the concert, six performers provided an appetizer of traditional flamenco dance accompanied by guitars, voice and hand clapping, all performed on the broad landing between the staircases in the galleria outside Symphony Hall.

The first half of the ASO concert proper was indeed in line with the “Spanish Night” theme, opening with a suite of three dances from Manuel de Falla’s ballet, “El sombrerode tres picos” — more familiarly known to English-speaking audiences as “The Three Cornered Hat.”

Portuguese American conductor Jacomo Bairos became music director and conductor of the Amarillo Symphony in 2013. Touted in his bio as having been mentored by ASO music director Robert Spano, as well as Kurt Masur and conducting pedagogue Gustav Meier, Bairos’ exuberant, broadly sweeping gestures appear somewhat choreographed — perhaps for the audience more than the direct benefit of the musicians — but there is genuine talent here with a lot of headroom for growth.

Bairos seems to know what he wants from the orchestra, even if it isn’t always a practical possibility. He attends well to shaping dynamics and, at his best moments, can achieve a visceral energy that parallels that of his own body movements.

Interestingly, the Atlanta Symphony Youth Orchestra will perform the same Falla suite on Saturday at 1:30 p.m. at Symphony Hall under the baton of Joseph Young, the ASO’s assistant conductor and ASYO music director — a rather nifty educational coordination of repertoire.

Karadaglić plays a guitar made in 2007 by innovative Australian luthier Greg Smallman. It looks essentially like a traditional classical guitar, but Smallman’s near-revolutionary structural design makes the instrument more responsive and helps the guitarist achieve a fuller, more rounded sound. Nevertheless, the concerto is with orchestra, albeit a small one, so the instrument was amplified. That isn’t so simple in classical works as it is in popular music.

While the goal of such amplification is to increase presence and volume, in the traditional classical music world that is ideally done without distorting either the sound of the instrument itself or the aural geography — the apparent origin of the guitar’s sound and the perceived sonic depth of field.

The latter criteria was obtained, but the soloist’s volume versus orchestration still posed a few challenges. So it felt at times like the orchestra was walking on eggshells, but they did a valiantly professional job of it. Karadaglić played with an assured equanimity throughout.

As an encore, Karadaglić performed his own solo guitar transcription of music already heard earlier in the concert, the “Miller’s Dance” from Falla’s “Three Cornered Hat.” That encore and both of the Rodrigo concerti appear on Karadaglić’s Aranjuez album, released last July. Karadaglić autographed CDs in the galleria at intermission.

It’s hard to go wrong with Mussorgsky’s “Pictures at an Exhibition” when it comes to audience satisfaction, and the ASO achieved that in the second half of the program. One could argue with some of Bairos’ tempos, if so inclined, but those can be wide-ranging from conductor to conductor in this orchestral transcription by Maurice Ravel of Mussorgsky’s original version for piano.

Those issues tended to be overshadowed by this enthusiastic performance, which served up a solid conclusion to the evening.