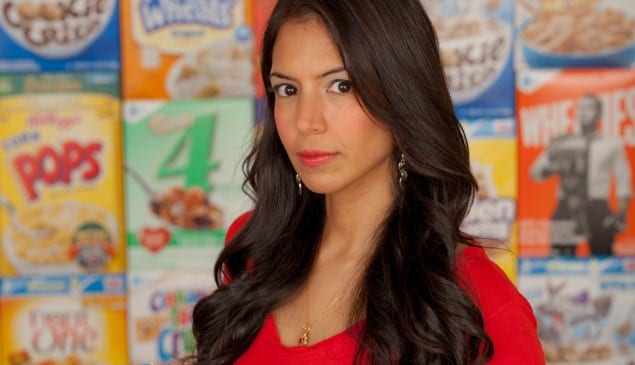 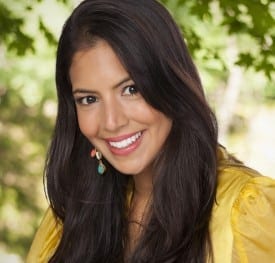 Blogger Vani Hari is known to her four million subscribers as creator of FoodBabe.com, bestselling author of The Food Babe Way, relentless food activist and one of Time magazine’s “30 Most Influential People on the Internet.” But all the healthy eating advocate, who will speak at the Marcus Jewish Community Center of Atlanta on Wednesday, wanted to be while growing up in Charlotte, North Carolina, was inconspicuous.

Blending in was no easy feat for the daughter of Indian immigrant parents, until Hari concluded the quickest route to assimilation would be to eat just like her peers. Fortunately, she took to junk food like a duck to water.

“I was a candy addict who drank soda, never ate green vegetables, frequented fast food restaurants and ate an abundance of processed foods,” she recalls in a phone conversation from her Charlotte home.

And in what she calls the biggest regret of her life, Hari completely shunned her mother’s plant-based home cooking as something that “looked weird and smelled funny.”

The downward dietary spiral continued after Hari graduated from college and was hired as a management consultant for Accenture. Eighty-hour workweeks were not uncommon. Nor was the staple diet of catered muffins and bagels for breakfast, five course expense-account meals for dinner and lots of pizza and donut deliveries to the office in between.

Following the crowd had a negative impact on Hari’s weight and the way she felt, but the connection between diet and health did not dawn on her until she was hospitalized for an emergency appendectomy in her early 20s.

“This health crisis,” she emphasizes, “was a wake-up call to change my life.” 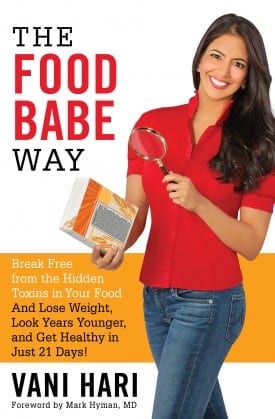 She began by changing her diet — adding real nutrition, eliminating processed foods and embracing organic eating — and shed 30 pounds immediately. Friends and family noticed her skin was clearer, hair shinier and eyes brighter. The eight prescription drugs she’d taken her entire life to control eczema, asthma and allergies — maladies she, her parents and her doctors all believed were genetic — were no longer needed.

Hari ascribes the profound changes in her body to having “broken free from my chemical relationship with food.” And what she discovered over a seven-year learning curve was so horrifying that she couldn’t shut up about it. So she started her blog in April 2011.

Her book, The Food Babe Way, released in February and a New York Times best seller, has earned praise from physician-authors such as Mark Hyman, Frank Lipman and Joel Kahn, each of whom are advocates for embracing preventive medicine and cultivating mindful eating habits in order to preserve health.

Hari’s writing is vivid, fast and no-holds-barred. Recounting a meeting with “some impersonal corporate PR types,” at Kraft Foods’ headquarters in Northfield, Illinois, in 2013, her book begins: “I wanted to lunge across the table, grab them by their shoulders, and cram their own toxin-laced product down their throats. “At the time, Kraft had more than 30 macaroni and cheese products containing FD&C yellow #5 and FD&C yellow #6 that were being sold in the United States. Kraft had removed those same additives from food they sold in Europe, which requires warning labels for artificial dyes, and replaced them with natural ingredients like paprika and beta-carotene.

(Hari has since learned that in Europe, the precautionary principle is that food chemicals and additives are guilty until proved innocent, while the opposite holds true here.)

Hari’s request that Kraft consider a label change to warn consumers of potential dangers — including allergic reactions, carcinogens and hyperactivity in children — was met with a swift and blunt “No.”

When she asked her hosts why their company had spent more than $10 million lobbying the FDA during the previous five years, their rigid demeanor and body language telegraphed their increasing discomfort.

Not one to be intimidated or sidetracked by stonewalling or cold-shouldered receptions, Hari dug in her heels and continued to hold Kraft accountable for its practices. In concert with other activists, Hari and her “army,” as she calls her millions of blog subscribers, have rocked the food industry at many different levels and the results have been encouraging. Starbucks is removing a caramel color from its whipped cream and frappuccinos. Chick-fil-A announced in late 2013 it was removing dyes, artificial corn syrup and TBHQ from its products and plans to only use antibiotic-free chickens within the next five years. Subway committed to removing azodicarbonamide (a flour-bleaching agent and dough conditioner that’s typically found in foamed plastic and yoga mats) from its sandwich breads going forward.

Throughout The Food Babe Way, Hari emphasizes the point that food additives, preservatives and chemicals are “not engineered to improve nutrition,” as she puts it, “but to improve the bottom line of the food industry.” By outlining myriad ways in which consumers are being duped by misleading food labels, Hari trusts that “once we find out what’s in our food, we cannot unlearn it or forget it . . . which leads to more informed choices” at the point of purchase.

Intended as a guide to help empower readers and place the responsibility for overall health and well-being squarely in their hands, the book is a three-week habit change program that includes eating plans, recipes and tips.

As for Hari and her need to conform at any cost, she’s come full circle. “Now when people ask me where’s my favorite place to eat for healthy, delicious and nutritious cooking,” she says, “I tell them, ‘Nothing beats a seat at my mom’s kitchen table!’”