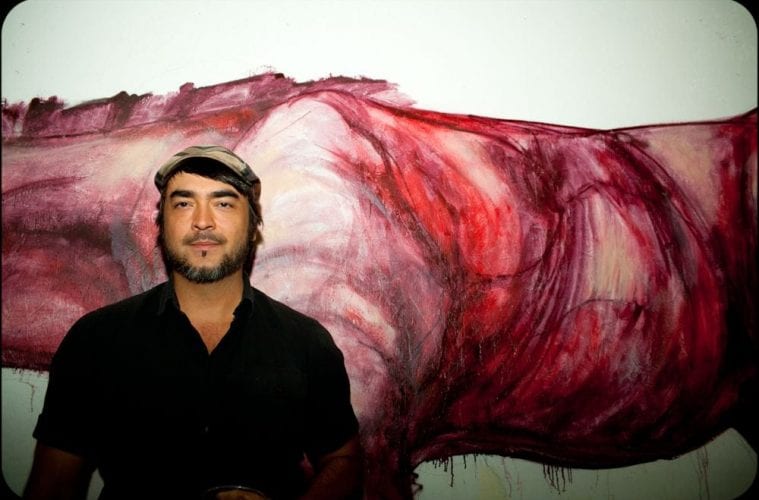 Anthony Harper, in front of a mural left by a visiting graffiti artist (Photos by Karley Sullivan)

10 years of ArtsATL: The humble beginnings of the Goat Farm Arts Center

Editor’s note: In 2012, the Goat Farm Arts Center was still a fledging artists community in a hip but hardly glamorous area on the Westside. ArtsATL cofounder and then-Executive Editor Catherine Fox wrote the first major story about the Goat Farm and helped introduce it to the broader public. The Goat Farm is about to undergo a $250 million renovation that will bring more apartments and live/work spaces along with a 125-room hotel. Fox’s story captured the Goat Farm in its nascent beginnings of becoming a force in Atlanta’s arts community.

Tucked away behind the chic and bustling Westside Urban Market, the Goat Farm — a thriving community of artists and other creatives — exudes a scruffy bucolic charm.

Just inside the entrance to the 11-acre compound, an artist is photographing works set up on an easel under the trees to the tune of intermittent squawks from a large turkey settled nearby. The dirt-and-gravel path that threads through the grounds leads past 19th-century brick buildings, detailed with arched windows and doors in various states of renovation and decay.

Across a courtyard from a roofless ruin that nature is steadily reclaiming, several people bend over their computers amid the shabby comfort of the Warhorse coffee shop, the central meeting place and the “office” of Anthony Harper, who runs this multi-use development.

Yes, Harper, an army brat, was a drummer in 14 unsuccessful (his description) rock bands. Work boots, a newsboy cap pulled over longish hair and a passel of color-coded keys attached to his belt are his standard business attire. But he also has a degree in international business, spent eight years in New York working as an investment banker and helped start an advertising agency. In fact, when he and Melhouse, business partners since 2003, bought the Goat Farm property, then called Murray Mill, in 2008, they planned a conventional development with apartments, boutiques and the like.

The economic downturn in 2008 put a hold on those plans. As the partners began exploring temporary uses for the property, they came to appreciate its history. Opened in 1889 as a factory that made cotton gins, it took a bohemian turn after Robert Haywood purchased it in the early 1970s. Haywood, who ran a sheet metal company there, maintained a beautiful garden and brought in goats to eat the encroaching kudzu. He is remembered as a character who, among other things, kept his dead (murdered!) cat lying in state in the refrigerator next to his workmen’s lunches.

Haywood began to rent studios to craftspeople and artists, who prized the large spaces, cheap rents and Intown location. It became a little community. Katherine Mitchell, who moved there in 1982, believes she was the first artist actually to live on the premises. She remembers hours spent scrubbing years of grime off the walls and ceiling, which would drift down when trains rattled by.

“It was cold in the winter and went up to 102 degrees in the summer, but I loved the view of downtown and the sunset and the rumbling of the trains,” recalls Mitchell, who moved away in the late ’80s.

When Harper and Melhouse purchased it, it still possessed the romantic aura and attributes that had attracted artists before. The two reasoned that it would again. Harper placed a simple ad in Creative Loafing, offering white-box studios at $1.15 per square foot and loft apartments at $1 per square foot — residential market rate, he says.

It didn’t take long to build a tenant roster of 50 to 60 artists, plus Fresh Roots Farm, whose field of organic vegetables anchors the northern end of the property. And, of course, the goats are back — now serving a purely ornamental function, on the Goat Farm logo as well as the property itself — along with roosters that crow and peck around in the grass with the hens. The comfy Warhorse coffee shop serves as a gathering spot.

When rentals reached a critical mass, the developers started to think about creating a performance center on the site. “We were convinced that engaging programs would attract tenants,” Harper explains. They reasoned that the more culturally active and relevant the Goat Farm became, the more people would want studios there. New York’s magnetism is a large-scale case in point.

They invited gloATL, the avant-garde dance troupe, and two theater groups — Saiah and the Collective Project — to become rent-free artists-in-residence. They designated Goodson Yard, an airy 10,000-square-foot building, as an event space and began offering it to local groups whose work they admired — for free. They also supplied production gear and logistical help.

“What we realized at the beginning was that big [groups] who could afford rental spaces weren’t doing the most interesting things,” he says.

They felt that they would create more cutting-edge energy if they didn’t approach the arts events as an income stream. If they nurtured the arts, the tenants would come. They approached the Goat Farm as an experimental business model in which real estate funds art and art funds real estate.

“We decided to be a for-profit arts incubator,” Harper says.

The Goat Farm Arts Center, which now fields about 80 requests a week for use of its spaces, selects about 10 events a month. They encompass CD launches; performances such as “Mother/Mutha,” a dance by T. Lang exploring the history and implications of the word “motherfucker”; benefit events for the Hambidge Center and Atlanta Shakespeare. Vouched Atlanta gives readings and sells books at the Warhorse. So far, it’s working. Attracted by the vibe, small businesses — floral design, catering, publications, nonprofit organizations — have rented spaces alongside a growing number of artists. The property now has 365 artists in its 150-plus studios. Demand continues; space is rented as soon as it is built out. There’s a waiting list of 225 people for the 25 residential lofts. Paying customers have done fashion and film shoots and held weddings there. (Only three per year are permitted; first come, first served.)

After three years, with an arts investment that Harper estimates at $200,000 as its only marketing, the Goat Farm is profitable.

The property is cool but not glamorous. Studios are basic; the tradition of minimal heating and cooling continues, and the restrooms are down the hall. Ladies in stilettos may get stuck in the grass. There is one public restroom. Harper says he’s working as fast as he can to meet demand for space and make upgrades.

There’s room to grow. Four of the remaining unused buildings can be rehabbed relatively easily, though three will need major renovation. Harper is toying with the idea of bringing in shipping containers to build out as studios.

But what about down the road? In the typical real estate cycle, popularity breeds change. New York’s SoHo is the classic example. Artists colonized abandoned lofts, followed by more artists, galleries and restaurants. Once they tamed the frontier and made it cool, tenants with more money wanted in. Rents skyrocketed and the artists were forced out. Now even the galleries are gone. Will success spoil the Goat Farm? Not as long as he’s involved, Harper vows. He says they’ve already turned down several offers. “We’ve discovered there is no need to go the traditional route,” he says. “Conventional real estate practice seems so bland now.”

In fact, they are applying the same principles to a property in the Castleberry Hill district, which will house a mix of artists studios and an anchor nonprofit organization.

Harper clearly relishes his role as impresario. He is a constant presence, and he and Melhouse help their tenants in unquantifiable ways. For instance, Cristina and Zach Meloy had outgrown the space from which they operated Pushstart Kitchen, a fledgling supper club, and they told Harper they were going to leave the farm. He induced them to stay by jumping them to the top of the waiting list for residential lofts, in which they now live, work and host their suppers.

“Recently, Chris found an old work table hidden under the rubble in one of the unrenovated warehouses,” Cristina says. “He had it refinished and donated it to Pushstart. Now we can serve up to 18 people. That will really help us.”

The Goat Farm location is integral to their business. Fresh Roots Farm is a supplier — truly farm to table — and the property’s ambiance contributes to Pushstart’s appeal.

“I’m not going to say the Goat Farm will never change,” Harper says. “I want it to mature as I do, whatever that looks like. But we hope to make a contribution to the human spirit as well as a profit.”

He pauses. “Before the Goat Farm, I would not have made that statement. I never understood what ‘supporting the arts’ or ‘contributing to the human spirit’ really meant. I’ve had a crash course in that and the reward that comes with it.

“I was never a fan of the arts outside of music. I know it’s a cliché, but art fills a hole in my soul — a hole I never knew I had.”