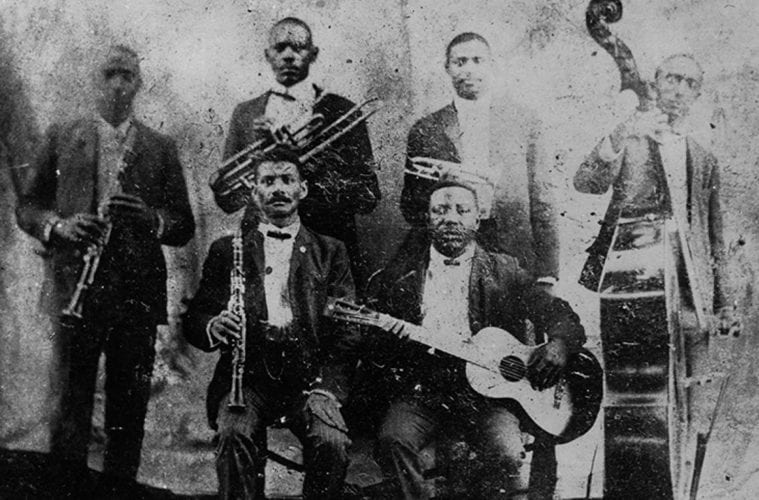 Archival photo of Buddy Bolden, back row, second from right

​Q&A: CiCi Kelley on choreographing the roots of jazz in Bolden, the motion picture

New Orleans between 1885 and 1910 was a place like no other; jazz was born there amid a diversity of people, philosophies, and possibilities, and has proven the most definitive artistic symbol of American democracy. –Wynton Marsalis

I remember being a dancer in the process of bringing the motion picture Bolden to life, and the feeling was quite raw. Twelve hours a day were spent glued to my partner — connected on a soul level, connected to my ancestors and the incessant downbeat of Wynton Marsalis’ score. When the dancers were called to set, we would often joke that it was time to “throw that ass in a circle,” referring to a popular song at the time that perfectly described the movement. Bodies, connected at the hip, gyrated in a circular motion. Men lifted women high into the air while others dipped and scrubbed the floor with sensual abandon. Our costumes depicted a working-class lot — in some cases, dingy from a hard day’s work. The sweat and heat of the room meshed with the music to create an authentic vibe that will captivate viewers in the very real experience that is the birth of jazz.

Bolden — the $100 million film that will be released in theaters Friday — tells the story of New Orleans musician Buddy Bolden, who is credited with inventing jazz. There are no recordings of his music, but Bolden was Louis Armstrong’s chief influence, and his story is one of jazz music’s greatest mysteries.

It has been nearly 21 years since producer and director Dan Pritzker began working on the film. In that time, several versions of the script were written and multiple edited versions of the current film were made, all because Pritzker wanted to ensure that this story was not only told but also told in such a way that showed Buddy Bolden honestly and completely.

Then Pritzker brought in choreographer CiCi Kelley, who, in partnership with dance-maker Charles “Bubba” Carr, successfully captured the spirit of Bolden’s era. They cast more than 300 dancers whose backgrounds included ballet and tap as well as social, commercial and modern dance genres. The energy and character brought forth from all of these styles combined with Kelley’s sassy nature and her embodied blood memories of African American vernacular movement to recreate the energy of jazz clubs of that time. This was both the genesis of jazz music and where African American vernacular dance would begin its evolution toward swing, Lindy hop, vaudeville, jazz and eventually hip-hop.

ARTS ATL: What is it about your background as an Atlanta native that was right for Bolden?

CiCi Kelley: My primary role on the choreography team was to embody and communicate the African American experience during the time period and life of Buddy Bolden. I was also able to be cast as a dancer in the film and live in the movement. It was an honor to play and experience both roles surrounded by this beautiful dance community.

Outside of who I am as an artist, I leaned on my grandfather, who is 97 years old, to gain some inspiration and insight on what America was like almost 100 years ago. His mini history lessons allowed me to translate the emotion and struggle into some captivating movements. That, alongside Bubba’s creativity, made us a great team for this project. 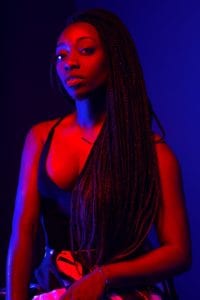 ARTS ATL: As a woman of color, do you find it difficult to gain positions where you can take the lead as a choreographer, as you did in Bolden?

Kelley: In this new age of entertainment, I find that the process is vastly different from when I was a young dancer climbing the ropes. Then, it was about your level of training and the amount of work that you put into your craft. Now, there is greater aspiration to the celebrity lifestyle, and it is fairly easy to conquer, as long as you have a smartphone and a gimmick. Behind the scenes, it is still very male-dominated, with the male gaze and opinion very much [controlling] many of the choices being made. However, with the standing power of pioneer women like Oprah Winfrey, Shonda Rhimes, Beyonce and many more, the black woman has an undeniable presence and voice to express her experience and creativity.

ARTS ATL: How were you able to ensure the authenticity of the movement and prepare such large groups, scene after scene?

Kelley: There were over 300 dancers hired for this film with a wide range of talent and training. Everyone came with a different background and experience. However, it all came together once the movement was placed on their bodies and the intention was set. The authenticity of the movement was captured first through hours of research watching previous dance films and looking at printed images from that time. We also had many conversations with the dancers during rehearsals to gain an understanding of how the movement fit on their bodies and how they were choosing to use the movement to create their characters. Each couple had their own story, which makes a difference when you stand back and look at the entire group. You begin to see individuals.

ARTS ATL: What is next for Atlanta? Do you see another Bolden-sized film project for the dancers in our community? What do dancers in Atlanta need to do to get ready for the next wave of opportunities?

Kelley: There is so much in store for the Atlanta dance community, and with Georgia’s tax credit, I believe there will be more films of this scope coming to our city.

To stay ready for opportunities, dancers need to stay in class. Train, train, train! Create a plan and invest in yourselves to reach these goals. You must create discipline within yourself, especially if you have a vision. There is nothing easy about pursuing a career in the arts; however, it is possible. It takes talent, a lot of discipline, education and self-awareness to make it. Don’t get caught up in the hype. Follow your own path, seize and monetize it.

ARTS ATL: The film Bolden explored the history of jazz music and its founder Buddy Bolden. The film employed many black actors and dancers. Do you believe that is why Atlanta was chosen as a primary location for filming?

Kelley: Given the history of Atlanta and the rise of the elite African American family, Civil Rights leaders and Sweet Auburn Avenue, I do think Atlanta was the ideal home base to find talent for this film.

My family migrated to this city because the opportunities to “make it” were so great. Thus, the offspring from my parents’ generation have continued this legacy into the present day. With the birth of the Atlanta hip-hop music culture and the 1996 Olympics, Atlanta became the hot spot for many entrepreneurs and creative artists to prosper in their fields. I am truly a product of Atlanta.