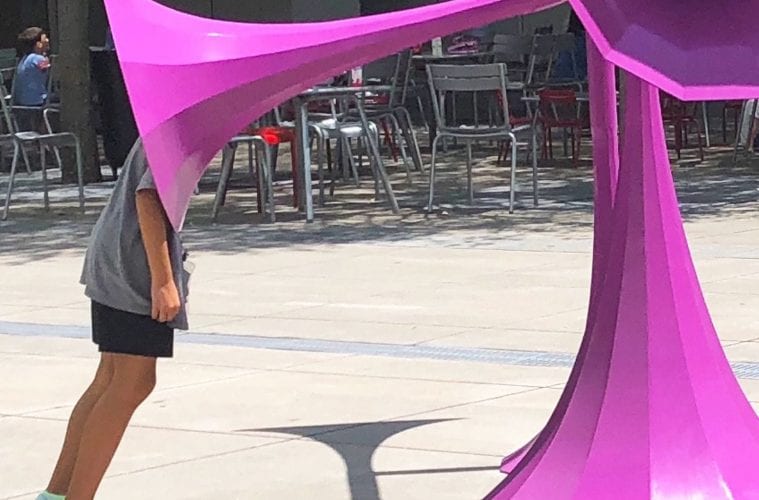 A fascination with sound unites the multidisciplinary work of London-based artist and designer Yuri Suzuki. He has created immersive audio installations at sites such as London’s Victoria and Albert Museum and Le Corbusier’s modernist church at Firminy, France, in addition to serving as a product design consultant for companies including Google, Olympus and synthesizer manufacturer Moog. In 2013, Suzuki and his collaborators Mark McKeague and Joseph Pleass created the DIY musical invention kit OTOTO, which allows users to turn everyday objects into musical instruments using receptors and a built-in synthesizer. The device was added to the collection of the Museum of Modern Art in 2015 alongside the open-source hardware and software platform Arduino and Colour Chaser, another Suzuki invention.

Following a pair of installations by Spanish designer Jaime Hayon, Suzuki’s Sonic Playground is the latest activation of the High Museum’s outdoor Sifly Piazza, where it will be on view through October 7. Using large, brightly colored sculptures resembling ear trumpets, museum visitors will be able to transmit sound across the piazza and interact with other participants. As Suzuki reminded me during our conversation over Skype, it’s visitors’ voices that will be played with as much as the objects comprising Sonic Playground.

ArtsATL: Your work comprises elements of technology and design, DIY and electronic music and contemporary art. How have you come to embrace such a deeply interdisciplinary approach to your work? Do you primarily identify as a designer, a musician or an artist, for example, or do you disregard such distinctions?

Yuri Suzuki: There is a distinction in my practice between what I do personally as an artist for a museum and what I might do for a commercial project commissioned to my design studio, but for me it’s quite difficult to categorize myself. There isn’t such a clear borderline between genres.

ArtsATL: In a way that feels more strongly reminiscent of a designer than a traditionally understood visual artist, you seem to be interested in making objects that people not only enjoy as viewers, but which they can also use as tools to make their own original creations. Whether you consider the OTOTO musical invention kit or the Acoustic Pavilion installation you presented at the church designed by Le Corbusier, there’s a DIY, hands-on quality to your projects, as well as a sense of modularity about the objects and installations themselves. Can you speak to these components of your work?

Suzuki: Interaction is one of the best methods for understanding my work. With visual art, you’re often only able to look at something and then perhaps gain some additional context from reading a little information about it. In my work, I try to avoid any text. It’s more about you handling and using the object and learning something or getting a message from that experience.

I’m always curious about watching people use these tools or interact with these objects, because it creates potential for the unexpected to happen. I see visitors to the exhibition adding another layer to the creation. Like with the OTOTO device, such different outcomes can be created by different people. At this moment, I’m really interested in how people can use my tools to create something else. Of course, as an individual, my capacity is limited; only one human can create so much. But by taking these principles of mass production and distribution, I can give these tools to people who have totally different perspectives and different abilities to create something else. A big part of my work is collaboration, and this sort of interaction demonstrates the way that an idea or experience can change and grow through collaboration.

ArtsATL: The Acoustic Pavilion at Site Le Corbusier shares many qualities with the Sonic Playground installation at the High Museum, particularly an engagement with shared public space. What unique effects can an auditory installation have in that sort of public context?

Suzuki: I often think about how audible communication — just in general, like a conversation — doesn’t commonly happen in public spaces in places like Japan and the UK. People are a bit cautious about what they say, and it’s not very easy to talk to the person next to you. I wanted to provide space for you to coincidentally meet people or start a conversation, which could lead to you learning something interesting or making friends. For me, it was about enhancing the possibilities for communication in public space. ArtsATL: What makes sound a uniquely compelling sensory experience for you to play with as an artist, designer and musician?

Suzuki: I believe that sound and hearing are among the most powerful ways of getting information. I spoke with Shuntarō Tanikawa, who is a famous poet from Japan, about why he continues to do public readings in addition to writing poems. He told me that the human brain translates text to verbal communication, like an audible sound inside of the brain. I think the brain may understand sound better than text or a visual image.

Of course, audio communication has also developed so much in terms of technology, like if you think about WeChat or WhatsApp in China. It’s much easier and quicker to send an audio clip of your voice than type out text. We know this from talking to virtual assistants like Alexa, too.

ArtsATL: Your installation at the High Museum is referred to as a “playground.” Atlanta is also home to one of Isamu Noguchi’s Playscapes, the only playground designed by the artist which was completed in his lifetime and (if I’m not mistaken) the only one still in existence today. What are your memories of and associations with playgrounds, and how have they influenced your work? Do you consider playfulness an important quality of your work?

Suzuki: Playfulness is one of the best ways to forget about context and focus only on experience. That can only come from playfulness, I think. Playgrounds are places where you can go at any age, regardless of gender or whatever background you come from, and you may have some sort of precious experience. Playfulness can be a great way to enter a work of art as well. It might be quite difficult to interact with something like a conceptual sculpture.

I did a residency in New Delhi a couple of years ago and was struck by the hierarchical class divisions in society there. People who share the same space may be very divided socially, and only people of a certain class are able to pursue art. I made one public installation there which was quite playful, and many of the young kids who interacted with this work may never enter an art museum. They may have not even understood that experience as involving art; it could have just been an hour of fun for them. Making space for that kind of moment was important to me.

ArtsATL: Piazzas, such as the Sifly [Piazza] where Sonic Playground is installed, have historically served as public gathering spaces and openly shared common ground. Today, many consumers, corporations and government officials similarly talk about the democratizing potential of design, and design thinking is being implemented in wide-ranging public and private initiatives. What common good does design serve? In what ways can we discuss design being “for everyone,” as the title of a 2015 MoMA exhibition claimed?

Suzuki: I’m not sure about speaking as an artist, because I believe an artist’s work should be more subjective, but I feel the designer’s social function is to suggest or make a plan for a new way of living. Good design allows you to share experiences with anyone and, like a playground, can help you forget about context or individual differences and just enjoy the experience.