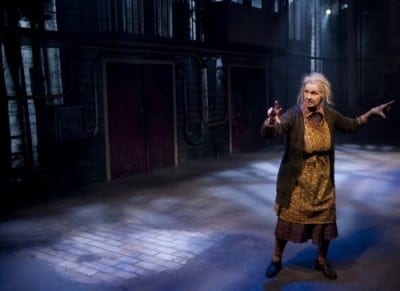 Every year in February, the Alliance Theatre produces the winning work in its annual Kendeda National Graduate Playwriting Competition, selected from entries in graduate playwriting programs across the nation. This year’s winner, “The Fairytale Lives of Russian Girls” by Meg Miroshnik, on the theater’s Hertz Stage through February 26, is a fun, fast-paced and sexy look at the lives of modern Russian women through the quirky lens of traditional Russian fairy tales.

“Zhili byili,” or “They lived, they were,” as we learn at the opening of the play, is the traditional way to begin a Russian folk tale, the equivalent of our “once upon a time.” The characters in “Fairytale Lives” are contemporary women who find that the stuff of their lives is beginning to resemble more and more surreally the predicaments, aspirations and journeys of the heroines in those traditional Russian stories.

Annie (Sarah Elizabeth Wallis) is an American student departing for a summer in Russia to learn more about her family’s heritage and to brush up on her language skills. The departure scene at the airport with her mother is, like the beginning of a journey in a fairy tale, oddly full of warnings about the dangers in this country far, far away and admonitions not to stray far from the path.

When Annie arrives, the passport officer becomes a sentinel at the gates of the new kingdom, and her spinster hostess (Judy Leavell) is a dead ringer for Baba Yaga, the infamous witch of Eastern European folklore. A neighbor, Masha (Diany Rodriguez), lives with a boyfriend who has become a bear, literally, and her new friend, Katya (Alexandra Hendrikson), is having an affair with a rich married man whom she refers to as “the czar.”

The play has a rapid pace with lots of genuine laughs; the plot weaves in more and more elements of magical realism in a funny and quirky way. Annie is as astonished as we are when her hostess enters by the window, hands out suspiciously addictive homemade treats and assigns odd, difficult household chores, just like Baba Yaga. Especially funny and well done is a scene in Annie’s Russian-language class, ostensibly a course in business Russian. The teacher allows the class to devolve into a lecture on — what else? — the heroines of Russian fairy tales while eulogizing the more elevated and literary culture of another time.

“Fairytale Lives” is funny, inventive and compelling, and the cast is strong throughout. The fairy-tale framework, however, comes to dominate too much. To a first-time visitor, the residents of a foreign country often initially appear like outrageous characters in a fairy tale, but the characters and action here become more surreal, not less, as Annie gets to know the new country better. A few moments of intentional silliness — as when she gets into a fight with a basket of magic potatoes (they have eyes, after all) at Baba Yaga’s — are charming, but they also have the effect of distancing us from the more serious aspects of the characters’ situations.

All in all, the Kendeda Prize is a real gem for Atlanta theater. Showcasing the serious work of aspiring playwrights is a boon for both the artists and audiences. “Fairytale Lives” is a rapidly paced, funny trip through a faraway country. Something of the difficult, hardened, tragic, comic essence of modern Russia comes through in the unusual telling that couldn’t emerge any other way. And as it does for the characters, it stays in your very bones.