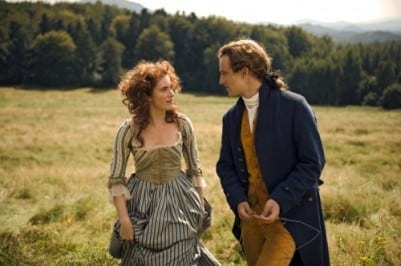 The new German film “Young Goethe in Love” is an energetic, punchy, contemporary take on a popular 18th-century love story. German poet Johann Wolfgang von Goethe famously wrote about his doomed love affair with a girl who was engaged to marry someone else. That fictionalized semi-autobiographical account, “The Sorrows of Young Werther,” was so popular that it helped spark the Romantic movement across Europe.

While the look of the movie is handsome, detailed and convincing of the period, the filmmakers take a rather refreshing and relaxed approach to telling the story. Alexander Fehling brings a slouchy, hunky 21st-century rebelliousness to the part of Goethe, and the script seems aimed at highlighting the modern aspects of the story. Miriam Stein as his love interest, Charlotte, is so full of sparkly agency and determined purpose that she seems more like a girl you’d meet rock-climbing in Wyoming than trapped in an unhappy engagement in provincial Germany.

It’s “The Sorrows of Young Werther” played up as modern romcom. Imagine Ashton Kutcher in a powdered wig and Natalie Portman in a hoop skirt and you’ll start to get the idea. While this may make the film sound terrible, the end result is surprisingly charming and entertaining. We see the characters endure crummy jobs, party too much with friends (and pay the consequences), deal with office bullies and contend with the aimlessness of post-college years.

OK, the 18th century may not have looked exactly like this, but it has seldom been easier to look at. Though the film occasionally seems about as historically accurate as “Scooby-Doo,” it does, in the end, give a real sense of what was so groundbreaking about the story Goethe told: its examination of the often tortured and unhappy lives of young people, and of the drive to be an artist and to live a life based on feeling rather than reason, was thoroughly modern.

The cast is easy on the eyes and, surprisingly, the film takes some interesting turns into more complicated territory in its later scenes. Charlotte’s fiance (Moritz Bleibtreu) is no cartoon villain, but a sympathetic, if humorless and manipulative, loser. Her father’s decision to force Charlotte into the marriage is likewise shown with complexity. He’s tortured by what he is telling his daughter to do, but he must do it in order to save his home and family.

These facts are revealed in scenes that are surprisingly well written. Goethe unintentionally shows up at Charlotte’s engagement party, and, as he is being introduced to her fiance, we watch the fiance’s horrible realization that Goethe is his rival. While Charlotte examines Goethe’s gift of a miniature theater stage made of paper, her father sits with her and defends his decision to force her into the unhappy marriage. The economic and smart way the movie particularizes romance, rivalry, friendship and family is its real strength.

Though “Young Goethe in Love” seems unlikely to become a classic for the ages, it’s lively and compelling —  a fun film for grown-ups, which is something of a rare find nowadays.