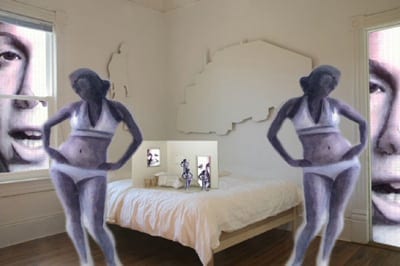 Art in 60 seconds: A conversation with video artist Amber Boardman

The recession may have stymied artists wanting to pursue a traditional gallery-museum career, but it has also heightened their entrepreneurial skills. Former Atlanta artist Amber Boardman took advantage of the Internet as an exhibition space for “Give Me a Minute,” a lively online video art show in which each piece lasts no more than — you guessed it — 60 seconds. Her call drew more than 60 entries, including quite a few Atlanta artists. Boardman deploys video, music, animation and drawing in creative combinations to explore contemporary culture. We spoke with the New York-based artist, who is part of the Shirey, an artist group formed in the spirit of self -reliance.

Catherine Fox: What inspired you to mount this show?

Amber Boardman: Several things. One is a Youtube audition video for the opera singer Paul Potts: the editing, story, set-up, music are so perfectly done. Every time I watch it I start tearing up halfway through. I was thinking that if I can be moved to tears in around a minute, what other things can be felt, communicated in that amount of time?

Also, much of my video and animation work is around a minute, so I naturally respond to that time limit. I used to work on animated television shows, so I got used to the concept of removing excess “padding” in a clip to get right to the point. The minute time frame is also interesting to me because it isn’t really enough time for much character development, but it is enough time for a concept to come through. I like the time-warp feeling it gives me. When one of the minute videos is boring it seems to last forever, and when it is interesting or well-executed, it leaves you wanting more. Fox: Were you surprised by the response?

Boardman: I expected maybe 15 or 20 videos to come from friends or acquaintances of mine. I was shocked that I had 61 entries from all over from people I didn’t even know. I was glad there were so many Atlanta participants! Several of them I knew, several I didn’t, so I think Atlanta did the best job of spreading around the call for art.

One of my favorite things about the show was how many people used it as an opportunity to try out new ideas or new mediums they hadn’t tried before but always wanted to. Several of them said it was perfect for that because of the compact format and that they now want to explore the ideas they implemented for this show. For example, neither Carrie Hawks nor Monica Cook had worked in animation before but now are all excited by it. [Monica Cook is another former Georgian who, like Boardman, is represented by Marcia Wood Gallery. — Cathy] Boardman: The Shirey is a shared studio and exhibition space. We currently have six artists/studios and one exhibition room. All of us are graduates of the MFA Fine Art program at the School of Visual Arts in New York City. I think we were the first class to come out of grad school right after the market crash, and this felt very liberating to us and encouraged our DIY leanings.

Everything totally shifted while we were in school. The pressure was off because we knew no one would be getting a solo show in Chelsea straight out of school. We all banded together and had an exhibition with Dan Cameron in an empty storefront in the Lower East Side, called “A New Currency.” We all felt that having a supportive artist community where we could work and show not only our own work but curate and show other people’s work was really important and empowering. We’ve had the space since June of last year, and it continues to gain momentum. In addition to exhibitions, we also have skill-related workshops like sewing nights and Web site workshops. Lately we’ve been having informal application nights where people get together over beer-cider-wine and apply for grants and residencies. It’s been great to have each other to bounce artist statements and images off of.

Stills, in order of appearance, are from videos by Amber Boardman, Todd Redner, Carrie Hawks and Paulos Dos Santos.