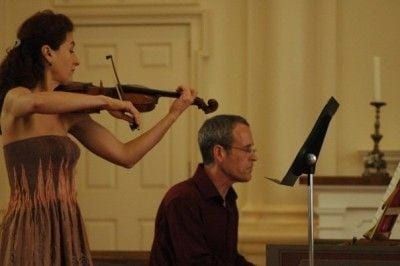 Violin as Cuckoo, Harpsichord as Frog

Violinist Olga Shpitko and harpsichordist Peter Marshall, two Atlanta Symphony musicians, offered an excellent ‘early-music’ program Sunday afternoon. The whole recital was unexpectedly addictive; just a few minutes into it, I was hanging on their every phrase.

Heinrich Ignaz Franz Biber’s Sonata IV (from 1681) is freakishly original, in part because the score calls for unusual tuning, a technique called scordatura. Instead of the strings of the violin tuned to the usual g-d-a-e fifths, the open strings are a-e-a-d. This allows, or rather forces, the player into surprising sonorities and makes for chords of strange beauty. Shpitko wasn’t as confident navigating the odd tunings of this fantastical sonata as she was in Biber’s sweetly comical “Sonata Representativa,” where the performer impersonates beasts and beastly men, from a nightingale (fast little twitters) and a frog (scrapping croaks, very funny) to a meowing cat and musketeers who marched with the amusingly wooden gait of toy soldiers. Brilliant stuff, played knowingly. They caught the low humor of making a violin and harpsichord peck and scratch like a chicken, and by taking the music seriously, elevated it to high art. It’s a straight line from Biber’s menagerie to Duchamp’s urinal “Fountain.”

Born in Ukraine and a graduate of Moscow’s Tchaikovsky Conservatory, Shpitko plays in a reserved, modern style. She’s been an Atlanta Symphony section violinist since 2006. For this recital, she adopted some elements of “historically informed” violin playing. Although she didn’t do much with the ornamentation — a key to interpretation in Biber’s day — she played with shortened, rather crisp bow strokes and a light, sometimes vibrato-free voice. Still, her tone is fundamentally warm, her notes rounded.

Peter Marshall, the ASO’s keyboardist, didn’t have much to do in the violinistically-madcap Biber sonatas but made up for it with Girolamo Frescobaldi’s “Partie 14 sopra l’Aria della Romanesca,” a set of 14 variations on a chord progression for solo harpsichord, an early 17th century “precursor to the blues today,” Marshall told the audience helpfully. He played with x-ray clarity — disciplined and note-perfect, with elegant, unmannered phrasing yet never lacking in character, each variation a polished little pebble. (Photo lifted from Marshall’s Facebook page, with apologies.)

They closed with music by the leading show-biz composer of the 18th century, the popular and protean George Frideric Handel. The Sonata in F, like most of Handel’s music, shares an essential element with most of Mozart’s. It’s all about the human voice and the singing line, an opera shorn of words and distilled to two instruments. Shpitko and Marshall understood this, too, and were at their most lyrical.

A final word about the venue. I was very pleasantly surprised by the acoustic and ambiance of Northside Drive Baptist Church’s small chapel, an unadorned white room with 18th-century styling and a high ceiling. Jim Barksdale, a member of the congregation who serves as impresario for these “Music on the Hill” concerts, has a great thing going. He said they don’t charge a fee for performers — the audience is invited to make a donation — and he’s already planning next season’s concerts. The early-music repertoire makes an ideal fit.