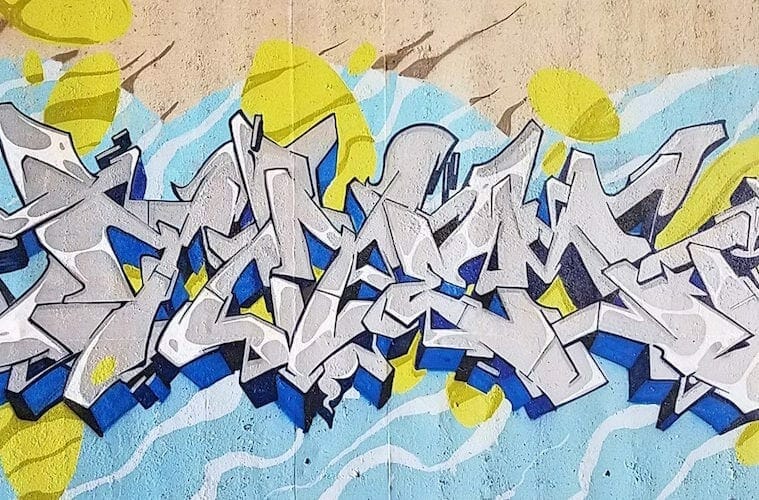 This graffiti writing, by Mr. Totem, is beneath I-85 in Atlanta’s Brookwood Hills neighborhood. Can you read it?

You’re walking down the street and see a shop with a large, brightly colored sign above the door. The sign is in Japanese, and clearly, the store is trying to send a message to those who speak the language. If you don’t understand Japanese, you probably won’t understand the sign. That’s kind of how it is with graffiti writing, too.

The graffiti writer is sending an emphatic message to those in the know. For those not in the know, the words might as well be in another language, but you can decipher graffiti using a few simple tricks. It’ll be easier than learning a foreign language.

We’ll focus on “pieces,” short for “masterpieces” and only one kind of graffiti. These are the top of the line in the graffiti world. They’re complex, labor-intensive and often feature 3-D techniques, master-level spray work and an artistry that rivals any mural. Often the message conveyed is simply the handle or name of the writer. Graffiti writer: SKIE (All photos by Arthur Rudick and streetartmap.org)

Sometimes the letters are more complex, built from multiple elements per letter. In this example by Atlanta writer Recluse Brown, aka TARES, the “T” (below, bottom photo, in light blue) is made of two separate elements.  The “A” (bottom photo, in green) is built from three elements. The same element that represents the vertical of the “T” forms the crossbar of the “A.” The “R” (bottom photo, in purple) comes from three elements, and the vertical of the “R” shares the same element as the right side of the “A.” You get the idea, right? Some graffiti pieces are so cryptic that you might not recognize them as graffiti. In this piece by local legend Mr. Totem, you could easily see a crazy-looking mural of baseball players. Those in the know understand that the bodies form the letters “TOTEM.” ONE OF THESE THINGS IS NOT LIKE THE OTHERS: To add another level of difficulty, some writers put their letters in unexpected orientations. North Carolina’s JEKS_NC uses this obfuscating technique here. The “J” and the “E” are almost horizontal and parallel rather than in sequence. The “NC” is on the left instead of its logical place on the right. Writers often will sign their names inconspicuously in a corner. Atlanta street art icon Chris Veal’s graffiti handle is “Blind,” and he signed this piece in regular script. Use the previous tips and see if you can construct the letters of Veal’s handle. Then go back to JEKS_ NC’s writing and look for his plain signature in tiny letters. Now you’re in the know. To test your skills, see if you can find “TOTEM” in the photo at the top of the page.