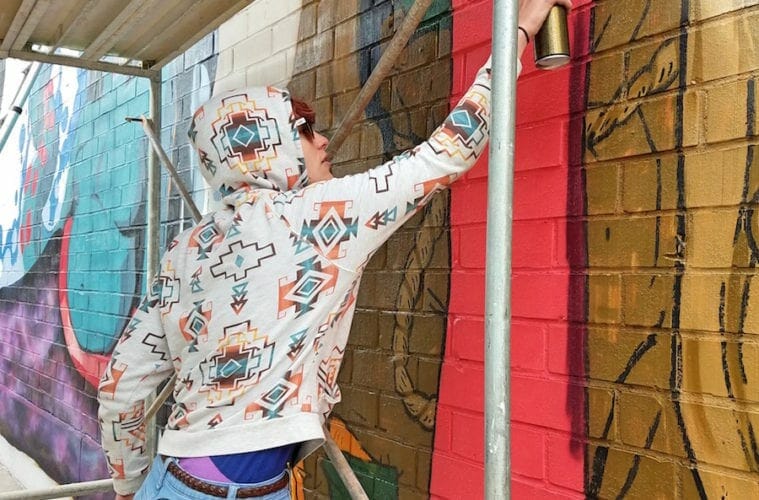 Courtney Hicks (pictured) studied illustration at the Tyler School of Art in Philadelphia, focusing on fine art. She never planned to do street art but says she's fallen in love with it. (Photo by streetartmap.org)

Today in street art: The collaborative spirit between Chris Alvarez and Courtney Hicks

Six years ago, Chris Alvarez and Courtney Hicks began new careers the same week, both at Floyd County Productions. Like many in Atlanta, they’re transplants. Hicks comes from Philadelphia, Alvarez from Madrid (yes, in Spain). Months later, they became neighbors in a Midtown apartment complex at the corner of 13th Street and Piedmont Avenue. It’s no longer there. As is Atlanta’s habit, it was demolished and replaced by a luxury high-rise.

Somewhere along the path of being coworkers, neighbors and close friends, the two became inseparable — to the point that they’re getting married Saturday (yes, this Saturday).

As multidisciplinary artists — each in their own respect — they’ve come together to do murals, comics, illustrations and film/TV animation. They won a 2016 Emmy Award for outstanding animated program for the FX series Archer. And both belong to the Lotus Eaters Club, a collection of Atlanta designers, illustrators, animators and assorted creatives.

The two draw a weekly comic strip on Instagram called FoxySwine, about two artists living in Atlanta. Hicks and Alvarez both love Sunday comics and grew up reading them in newspapers. He likes pigs. She likes foxes. “I am very impressed we kept it going for as long as we have,” Hicks says of the 18-month-old effort. A panel from the FoxySwine comic strip

Their murals include a large snake in the Studioplex courtyard near Krog Street Market in the Old Fourth Ward and sunflowers on the back of Studioplex; a laughing hyena inside Dad’s Garage Theatre; a barracuda at Glen Iris Drive and Rankin Street; and a dragon at Burnin’ Bridges Mural Jam, a live-painting and street-art event in Chattanooga, Tennessee.

Alvarez, who has lived in the United States for 20 years, studied animation at the Art Institute of Atlanta, so his work incorporates a lot of cartoon-like qualities. Hicks studied illustration at the Tyler School of Art in Philadelphia, focusing on fine art. She never planned to do street art but says she’s fallen in love with it.

Because of her fine art background, Hicks’ work often has a story line. “We have very different styles, but we merge together when we collaborate,” she says of partnering with Alvarez. “We have different strengths. Chris is a lot better at planning and setting stuff up.”

This snake lives in the Studioplex courtyard near Krog Street Market in the Old Fourth Ward. (Photo by streetartmap.org)

Alvarez’s strengths are more detail-driven. “I’m a lot more technical,” he says. “I like to plan things and be very organized. Whoever designs the piece usually leads the project. We put respect and trust in each other’s ideas.”

The two are working on a commissioned mural at a restaurant that only will be revealed on opening day. They’re also working on an animated feature for Netflix called America: The Motion Picture, and they continue to produce the FoxySwine comic series.

TALK TO US, PLEASE: