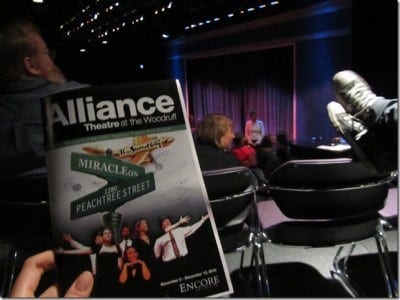 There may be only two Dad’s Garage regulars collaborating with the Second City in “Miracle on 1280 Peachtree Street” — local favorites Randy Havens and Tara Ochs — but don’t be fooled by the celebrated Chicago improv troupe’s third production with the Alliance Theatre. Second City holds many Georgia influences, including two other performers, Amy Roeder and Micah Sherman, who got some book-learnin’ over at UGA and know their way around the area.

And that’s one of the big charms of a partnership that seems to be picking up steam: as much as we might have feared a Yankee agenda in the nose-tweaking of Atlanta and the South, the improvisation-driven comedy at play at the Alliance is more good-natured than anything else. Yes, there’s Second City’s Ric Walker prancing around in Tyler Perry’s Madea in a spoof more aimed at “A Christmas Carol” than anything in the ATL. And there’s Roeder tapping her toes in racist disgust at an increasingly diverse Phipps Plaza Santa Claus. 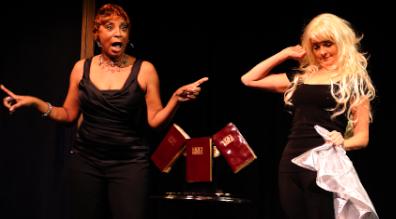 But with a few exceptions — public education, Mary Norwood — the jokes are lobbed more as softballs than high hard ones. Maybe too soft, which is one of the few downsides of the show, which mixes up regional satire with the kind of general sketch comedy that has become Second City’s stock in trade.

“Miracle on 1280 Peachtree Street” is at its best when audience members are invited to test the troupe’s improvisational skills with increasingly bizarre suggestions. And so we get a couple of neighbors wading into what is clearly a “marriage of convenience” when they visit the, um, flamboyant husband (a hilarious Micah Sherman) and his boozing wife (Ochs) and bring along … a unicorn. “Let the fantasy horse on in!,” the swilling wife says in a sweeping arm gesture, as it’ll fit right in “in this world of make-believe!”

Another favorite moment comes when young Delilah (Roeder) visits elderly neighbor Mrs. Wilkinson (Wallace) for chair-rocking on a porch as they reminisce about one’s ex-beau who is the other’s lost son. (Sherman provides the rocking motion behind them as an ongoing gag.) Audience suggestions of how the boy lost his way pushed him further and further away from home, thanks in part to a suggestion from audience member Lois Reitzes of WABE radio, who’d been parodied in a voiceover to open the show. Reitzes got her revenge, casting the yet-unseen son to Kuala Lumpur, much to the audience’s delight.

In another scene, the ensemble portrays a gaggle of Little Five Points panhandlers who alternate between hitting up audience members for change and asking them where they’re from to keep the improv suggestions flowing. When a woman mentioned that she’s from Atlanta, and then was asked what part, she replied “Conyers,” which drew a hilarious rebuke/correction from the ensemble. The audience, including the woman, laughed hysterically.

Which just goes to show that even the audience members, and not just the performers, can show they’re good sports.

The cast is uniformly hilarious, regardless of the city. Sherman is a particularly talented performer, blessed with the rubbery face of a young Tom Hanks and the sharp stare of a Jake Gyllenhaal. And Ochs captures the almost puppet-like cartoonery of Mary Norwood in her series of dimwitted “problem solved!” declarations. Musical director Matthew Loren Cohen keeps things moving with his piano accompaniment and sound effects (starting with honking cars that meld into “Silent Night”).

Other moments feel a bit forced and even hackneyed, including a Coke vs. Pepsi reference (even if it did draw laughs) and another trip to the “Real Housewives of Atlanta.” The show-closing musical that laments the frustration of being a Jew celebrating Chanukah in the South seemed a little weird in a city whose Jewish community seems so prominent. But by then, Second City — and, just as much, the local heroes of Dad’s Garage — had proved the point that North and South can laugh off the stereotypes and find our similarities.