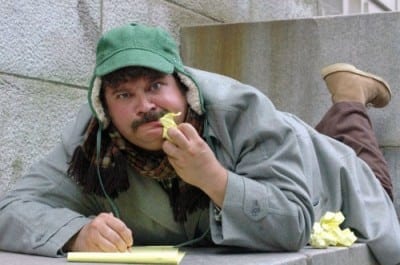 Tom Key’s version of “A Confederacy of Dunces” a potent comic mix, at Theatrical Outfit

Aficionados of the novel “A Confederacy of Dunces” will cherish Theatrical Outfit’s faithful, well-crafted take on John Kennedy Toole’s comic tale of the brilliant misfit Ignatius J. Reilly, who flamboyantly proclaims his quarrels with modern life while wandering through a lovingly evoked New Orleans.

The production, playing through September 5 at the Balzer Theater in downtown Atlanta, is a world premiere “adaptation” by Tom Key, Theatrical Outfit’s executive artistic director, of Toole’s 1981 Pulitzer Prize-winning book. Clocking in at nearly three hours, the show retains large chunks of material from the novel. Despite the multitude of characters — and story lines and language that seem forced on the stage — the strong cast delivers a satisfying experience, drawing frequent laughter with well-calibrated comic timing and crude physical humor. (Read ArtsCriticATL’s interview with Tom Key here.) If the book’s fans will savor the production’s adherence to Toole’s comic vision, those unfamiliar with the novel will likely find the production an ordeal, considering the work’s meandering plot, reactionary views and characters that on the whole lack redeeming qualities. While Toole’s social attitudes about Jewish businessmen, women and gays are stereotypical and outdated, his satirical sallies remain funny, if often involuntarily so.

Under the direction of Georgia Shakespeare’s Richard Garner, the actors, many of whom play several roles, maintain a fluid and frenetic pace as the profusion of scenes unfolds. Garner’s experience with Shakespeare’s complex plots and layers of characters serves him well in orchestrating the performance. The stage’s space encompasses several simply defined settings in which the multi-sided narrative takes place.

The production richly portrays the vibrant culture of New Orleans in the early 1960s, with its stew of Irish, Italian, black and Caribbean influences, eccentric personalities and contrary impulses toward Catholic guilt and unbridled hedonism. Echoing the book, this production makes New Orleans a spiritual, mythical presence — Toole’s New Orleans is as vital and real as Dickens’ London or Raymond Chandler’s Los Angeles. Ignatius J. Reilly remains a polarizing figure, with an abrasive honesty and nearly pathological refusal to conform to the standards of social decorum. Aaron Munoz, with his Falstaffian body, affected speech and broad, madcap gestures, accurately brings the character to life from the page. Ignatius’ laziness, bouts of intestinal distress and obsession with medieval philosophy are a potent comic mix.

Audience members who love the book will receive a thrill of recognition at seeing Munoz decked out in Ignatius’ signature green hunting cap with flaps, tromping across the stage pushing his famed Paradise hot dog cart. Burnishing another familiar prop from the book, Munoz slashes and thrusts Ignatius’ toy pirate sword through the air, illuminating his medieval philosophical arguments against modern existence, decrying its meaningless commercialism and loss of religious faith.

Yet this supposed “genius” all too often comes off as a tiresome bore. His frequent references to Boethius’ “The Consolations of Philosophy” and “Fortuna’s wheel” sound more sophomoric than learned and searching. Munoz’s performance, while imaginative and strongly defined, nevertheless leaves a sense of disappointment, the feeling that he could have delved further into the complexities of the role.

Several other performances achieve more. Although overly dependent on gay stereotypes, Andrew Puckett portrays the campy Dorian with an over-the-top energy and excitement that Munoz only intermittently reaches. Also finding depth and comic vitality in a secondary role is Scott Warren as the hapless policeman Mancuso, who hilariously dons a succession of disguises in his work “undercover.” Making a major contribution to the authenticity of the New Orleans atmosphere is Kathleen McManus, a Crescent City native who speaks with a pitch-perfect “Yat” accent.

In a bluesy portrayal that finds heartbreak-tinged laughter in the travails of black men in the segregated South of the time, Enoch King stands out as Jones, who is forced to work as a porter for brutally low wages after being unjustly arrested. William S. Murphey as the aging white gentleman Claude, among other roles, also defines a quintessential New Orleans character, with his on-target accent and rigid social views. Agnes Lucinda Harty and Marianne Fraulo display impressive versatility and energy in portraying multiple roles.

The production’s set evokes New Orleans with a collection of photographs of scenes from the city, mainly the French Quarter. Missing are shots of Canal Street and the city’s vintage, now vanished, D.H. Holmes department store, where Ignatius waits for his mother at the opening of the show. Set designer Sara Ward effectively uses a few simple elements to mark the different places. A desk and filing cabinet define the pants factory where Ignatius disastrously works; a bar and table evoke a New Orleans strip club; a simple bed is Ignatius’ squalid bedroom.

With all its demands on the audience, “A Confederacy of Dunces” is another worthy effort in Key’s mission of giving Southern literary voices a stage presence. The play remains true to the book, showing its power to excite deep affection and intense revulsion, a polarizing hallmark of the most vital American classics.