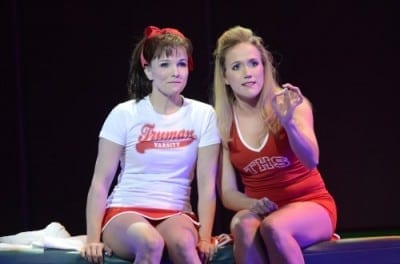 Review: Alliance might have Broadway hit with sassy and clever “Bring It On”

Don’t hate them because they’re beautiful. Or because they’re bitchy, conniving and too full of their own youthful coolness for their own good. Instead, love them for all that, and because the creative team of “Bring It On: The Musical” has pulled off the improbable task of turning a mediocre cheerleader movie into a dynamic new musical that bristles with talent and potential.

“Bring It On: The Musical,” having its world premiere at the Alliance Theatre through February 20, is part of the Alliance pipeline of developing new commercial musicals for Broadway, which has included “The Color Purple,” “Aida” and “Sister Act: The Musical.” It’s way too early to tell if the next Broadway hit musical is debuting right now in Midtown Atlanta, but you shouldn’t rule it out. 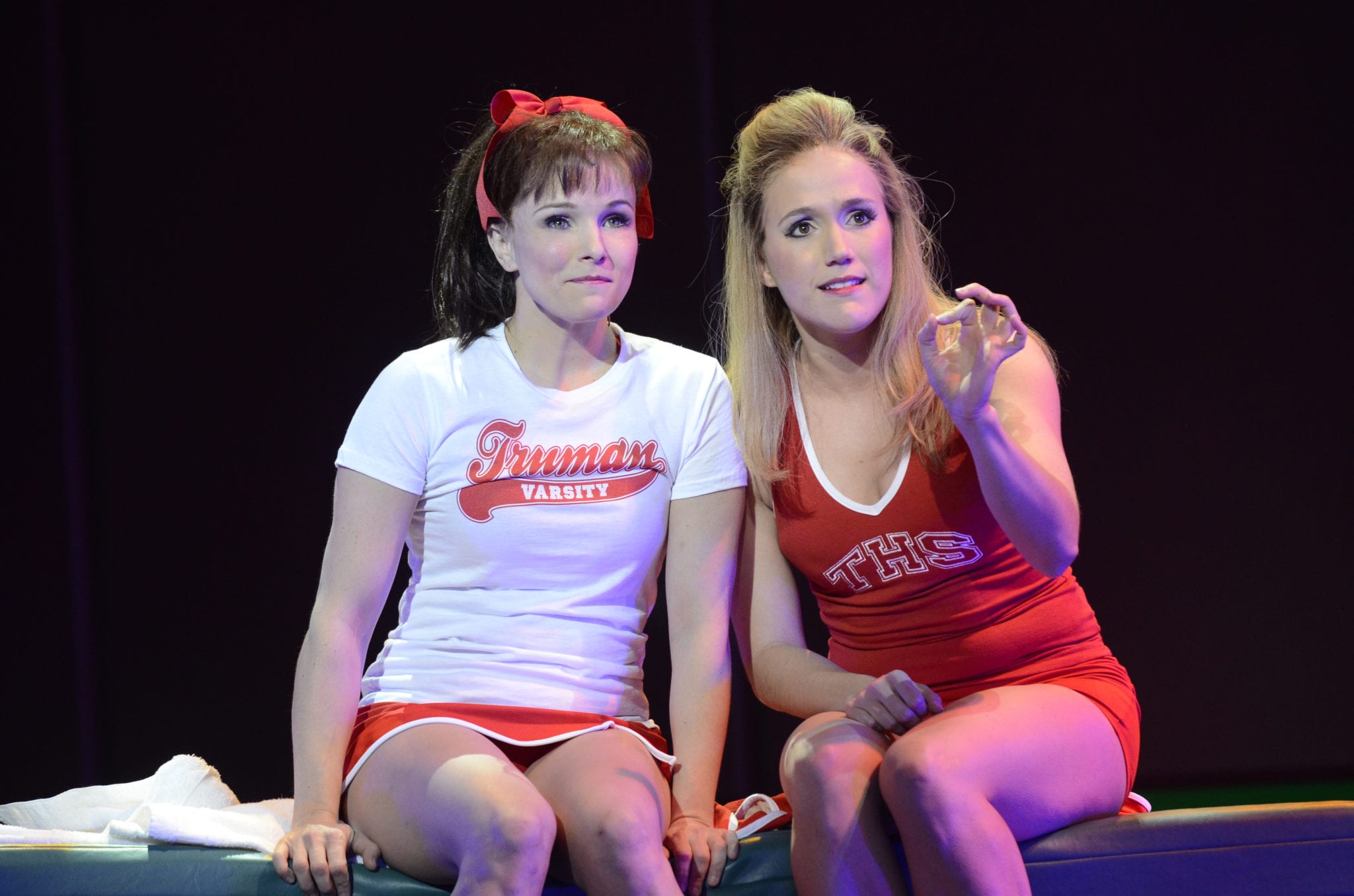 Eva (Kelly Felthous) and Campbell (Amanda Lea LaVergne) in "Bring It On." (Photos by Greg Mooney)

The show’s pedigree demands attention. Jeff Whitty, Tony Award winner for the hilarious puppet musical “Avenue Q,” wrote it, and Andy Blankenbuehler (Tony for “In the Heights”) directed and choreographed. Lin-Manuel Miranda, the hip-hop songwriter of “In the Heights,” composer Tom Kitt (Pulitzer Prize winner for “Next to Normal”) and lyricist Amanda Green (who wrote lyrics with Kitt for “High Fidelity”) collaborated on the songs, which include traditional musical style, some rock and a heavy dose of hip-hop. These five are a serious convergence of young American musical talent, who in different ways are trying to update the old conventions for modern audiences.

They’ve started from close to scratch to build a young, fun musical. All they’ve kept from the 2000 movie is the title, the subject and the basic notion of traditional white cheerleaders and black cheerleaders with hip-hop dance moves; the story and characters are new.

Campbell (Amanda Lea LaVergne) is the queen of Truman High School and captain of the cheerleading squad, with dreams of winning the national cheering competition. Her court includes Skylar (Kate Rockwell), a.k.a. “Bitter Bitch Barbie,” a self-absorbed sexpot who both embodies and lampoons every mean cheerleader stereotype that ever shook a pompom, and young, worshipful Eva (Kelly Felthous), who first name is very close to that of Eve Harrington, for those who remember their “All About Eve.” But Campbell is abruptly transferred in a school redistricting from lily-white Truman to Jackson, which is mostly black, a bit rougher and, worst of all for her, doesn’t even have a cheerleading team, just a dance crew, presided over by her black counterpart, Danielle (Adrienne Warren). 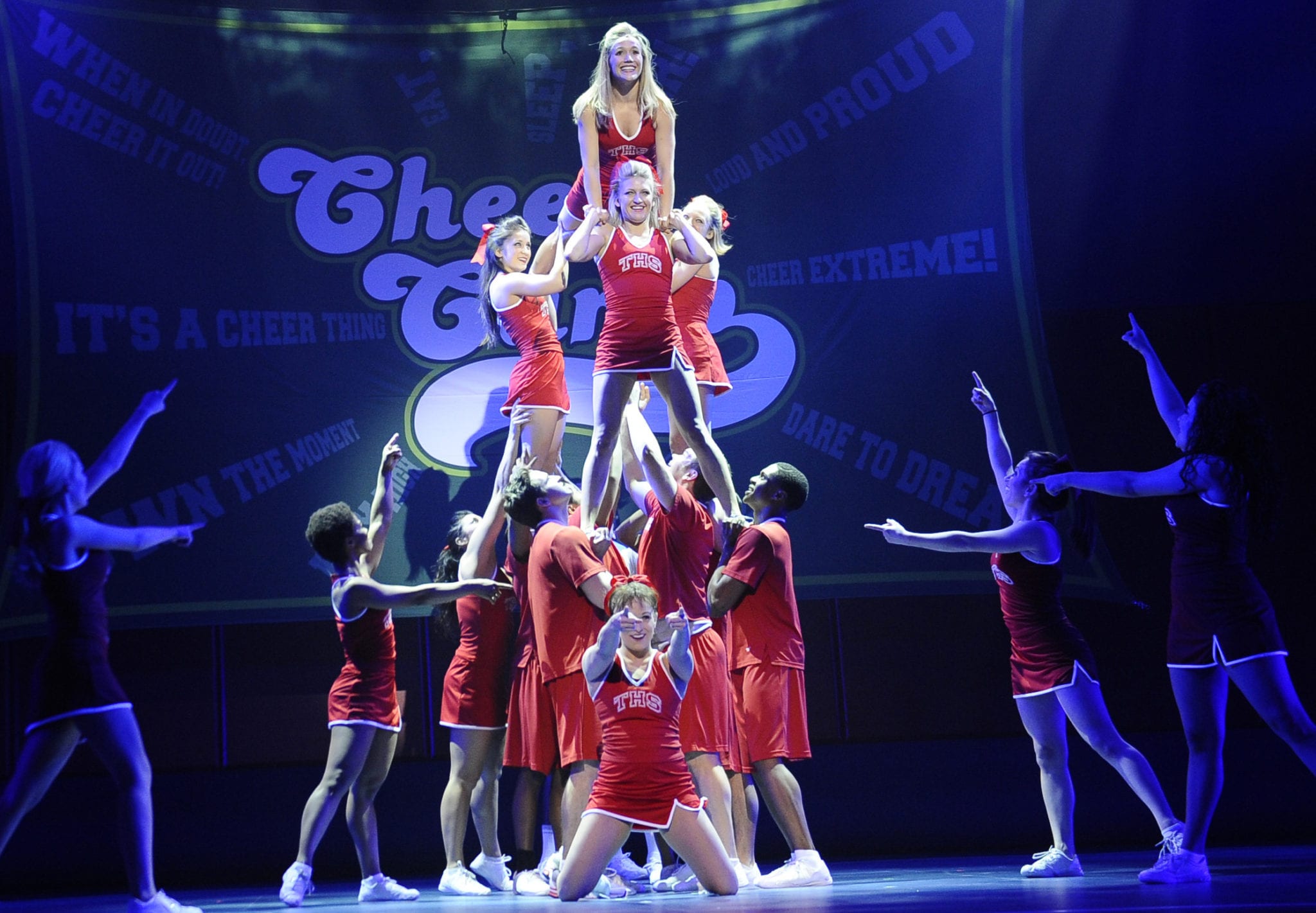 There’s a lot of story here, maybe a little too much, as Campbell gets her new Jackson peeps to compete against her former friends at Truman, and there are two contests in Act II, and subplots galore. Whitty, who took a puckish and provocative view of our cultural discomfort with race in “Avenue Q,” tones that down a bit here, but there are still some squirmy moments as Campbell tries to fit in at Jackson. Whitty also really nails the way kids talk (white kids at least) — “epic,” “heinous,” “vomitous,” “SFTU.” Best of all, “Bring It On” is funny, with clever lyrics, quick wit and physical bits; the audience on the official opening night was in stitches.

Musically, the Truman-set songs are not as strong as Miranda’s Jackson songs, which explode with the vitality that the best hip-hop offers. And the cast of young unknowns is ferociously talented. In a field of excellence, I particularly liked Ryann Redmond as Bridget, who starts out as the schlubby girl who wears the ugly mascot costume and transforms into a swan (OK, a somewhat schlubby swan), and Jon Rua as Twig, a geeky white kid at Jackson who turns out to have formidable rapping skills and a sweet thing for Bridget. 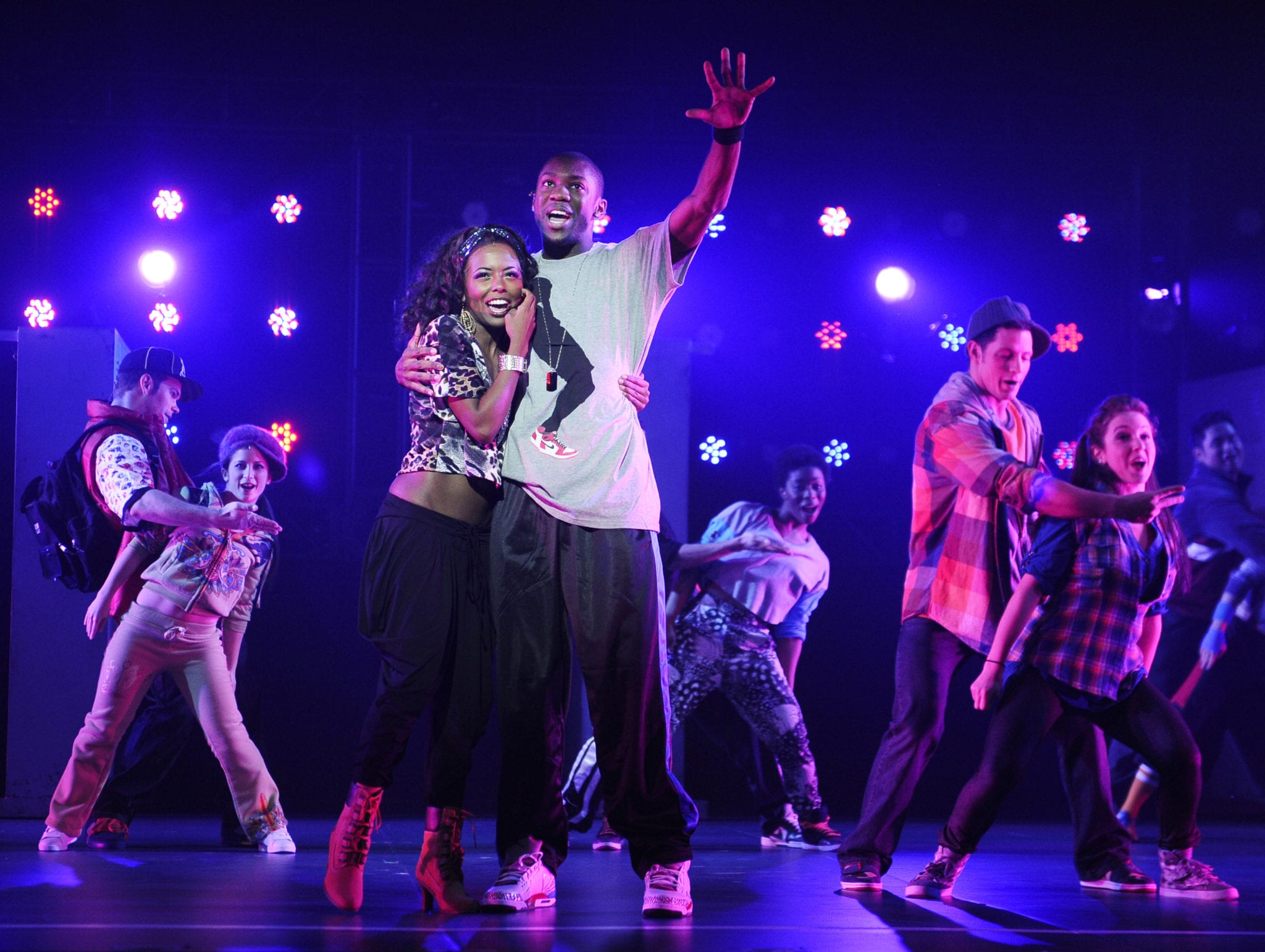 Now let’s give the creative team some notes:

1. Figure out something better to do with La Cienega (Gregory Haney), a gay kid who dresses in drag and is part of the Jackson dance crew. It’s not a bad idea, if a tad predictable in our “Glee”-drenched pop culture, but he’s not really a developed character. For that matter, with the exception of Danielle, the black characters aren’t drawn with as much loving detail as the white ones.

2. Give Campbell a different hairstyle. We’ve all seen “90210” and understand young adults playing high schoolers, but her hair is more Junior League than junior class.

3. Cut a couple of songs. There are 23 on the song list now. Just don’t touch Miranda’s show-stoppers at Jackson, like “Do Your Own Thing” and “Friday Night, Jackson.”

A musical at this point in its development is both fully realized (for this version) and a work in progress as it heads toward Broadway. There are many reasons, some of them having nothing to do with quality, why a show like this may or may not make it. But “Bring It On” has the right stuff; here’s hoping it goes to the Nationals.