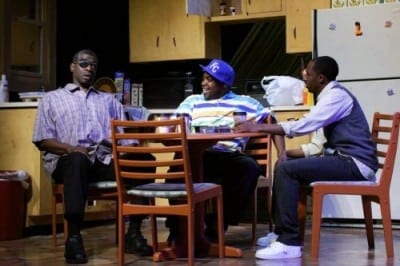 “I’m stuck!” Malcolm King shouts in “Broke-ology,” and the promising college graduate knows he’s not alone. He knows that his older brother, Ennis, is stuck juggling work, a baby on the way and caring for their ailing father, William.

Multiple sclerosis is sending William into a downward spiral, and everyone in the room frets that he’s going to take his two beloved sons down with him — even his late wife, Sonia, who has never really gone away after dying 15 years earlier. She floats about “Broke-ology” like an angel, drifting down a chiffon-draped staircase to remind William of the good times. Kenny Leon’s return to True Colors Theatre Company to direct Nathan Louis Jackson’s domestic dramedy presents a challenge: how to make this all-too-familiar story feel fresh and vibrant in both its comedic and dramatic elements. Armed with a talented cast and a game audience (whipped up into a pre-play frenzy, as usual, by the director himself), Leon for the most part succeeds. The play runs through February 20 at the Southwest Arts Center. (Photos by Horace Henry, courtesy True Colors Theatre Company.)

It’s not an easy task. Frankly, “Broke-ology” is a slight work, filled with uneven pacing, simple emotional themes and cheap narrative devices that betray obvious resolutions — with emotional manipulations designed to cover all of this. When Ennis shows Malcolm early on how their father should inject his medicine with a needle, and its consequences, it feels like a variation on the old theatrical prophecy that the gun you see in the first act will always go off in the second.

Malcolm has returned home to Kansas City, Kansas, with a master’s degree in environmental science from the University of Connecticut, and while he’s grateful for a gig at the Environmental Protection Agency, he wants to return east to teach under his mentor. Like everyone, he sees how the neighborhood has deteriorated, and he doesn’t want to get sucked into it.

Ennis, an expectant father who works at a fast-food restaurant, wants Malcolm to stay to share the load of caring for their dad. It won’t be easy; William’s disease is eating away at him — mind, body and soul. William has started hallucinating about Sonia (Jasmine Guy) and wants her back in the worst way. Jackson knows a family when he writes one, and the chemistry among the men — particularly the brothers — is fun, endearing and sometimes charged. (If you’ve had a brother, you know the feeling.) A trash-talking game of dominoes can flash from harmless joshing to tense disagreements. Stealing a neighbor’s outsized garden gnome elicits laughter, until one of the brothers reveals the ultimate idea of the midnight scheme.

Eric J. Little as the hopeful environmentalist Malcolm and especially Enoch King as the happy-go-lucky Ennis play off each other so easily that the crowd laughed at every gibe and gasped at every accusation as if on cue.

In Jackson’s script, the brothers represent the two ends of the spectrum of the working black man: the high-achieving college graduate with professional options, and the middle-class worker with few. Malcolm can’t make a decision. Ennis hopes his brother will remain home to help him care for their father, but also is jealous that Malcolm actually has a choice. Ennis seethes in these moments, and Enoch King does a masterful job of negotiating the character’s wild mood swings from mirth to anger. Afemo Omilami offers William as the emotional core of the play, which is mostly a good thing. Sitting in the front row, you could see real tears drip during one monologue. When, in a fit of nostalgia, he deftly hoofs and sings to the Temptations’ “Just My Imagination,” the audience jumps right into his pocket and possibly forgets the obvious insinuations of the song. But Omilami, a veteran of stage and screen, sometimes overplays his hand; even a father wrestling with his decline and his sons’ sibling rivalry has his subtle moments. Omilami, despite his formidable arsenal of moves, could rein it in a bit.

“Broke-ology,” as Ennis theorizes, is the science of being broke. The socioeconomics of being black in America warrants only a fleeting study in Jackson’s script, which focuses increasingly on the importance of family members’ balancing their dreams with their obligations. If the resolution of “Broke-ology” is too facile, the heartwarming performances by its cast will resonate long after its ending.