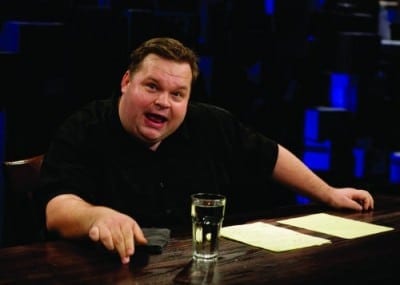 When you walk into the Alliance Theatre’s Hertz Stage, the first usher asks, “Do you know tonight’s performance is two hours without an intermission?” Uh, no. The second usher hands you a real $1 bill, with no explanation. Uh, thanks. Then Alliance artistic director Susan V. Booth comes out with a big “Parental Advisory” sign.

So begins “The Last Cargo Cult,” an offbeat but wonderfully engaging night of theater in the form of a one-man show/monologue/rant by the never-boring storyteller Mike Daisey. A large (to be kind), pale man, dressed all in black, he walks out, sits down at a plain wooden chair behind a plain wooden table and tells a bunch of stories, which are really one big story.

Those who can’t imagine an evening spent listening to a single storyteller are invited to imagine a great stand-up comedian, only with less aggressive laugh-wrangling and more of a big-picture viewpoint. Daisey is certainly funny, and if I had to pick other well-known performers to compare him to, it would be Lewis Black (the sputtering, profanity-laced outrage) and George Carlin (the keen eye for human foibles). But they are (were) still both stand-ups, and Daisey is a theatrical monologist, pursuing a more varied range of audience responses. (Photos by Jeff Gaines.)

“The Last Cargo Cult,” which is playing at the Alliance through April 11, weaves two threads together. The first is the Great Economic Shudder of late 2008, when our banks and bank accounts were suddenly revealed, he says, as “a mirage that began to shimmer and shake.” But Daisey is after more than the old news of the fall of Lehman Brothers; he digs into the always-fresh news of class consciousness, class envy and economic anxiety that defines us so much more than we wish it did.

The second is his extended visit to the South Pacific island of Tanna, one of the few places left on the planet that uses no money whatsoever. Tanna is part of the Vanuatu archipelago, known both as the inspiration for James Michener’s “Tales of the South Pacific” and one of the “Survivor” TV shows. But Daisey chose it because it is home to one of the last surviving cargo cults. In World War II, the U.S Navy set up bases on scores of Pacific islands, then abandoned them, leaving islanders fascinated with this rare connection to the outside world, and the stuff — the cargo — that they brought and left behind: the whole panoply of American Cool, such as cigarettes, chocolate, radios and engine parts.

“That is the point of Western civilization,” Daisey proclaims. “Our shit is awesome!” By pointing out his own addictions to our awesome stuff — iPods, American Express cards, Ikea furniture — he makes us squirm over our own addictions, and asks why we should be surprised that this Third World island culture literally worships our stuff; don’t we do the same? Daisey goes deeper, funnier and longer, than this thin summation can capture.

Maybe a bit too long. I clocked the show I attended at two hours and 10 minutes, and would have been very happy with 20 minutes less. As in the final reel of “The Return of the King,” you keep thinking this is a perfect place for it to end, but there’s always a little more.

But Daisey is not a minimalist. He’s a big voice with big ideas, a mashup of the hypnotic narrative skills of a Spalding Gray and the power of an Old Testament apocalyptic prophet, here to give us a reality check, even if it’s too big for us to cash.