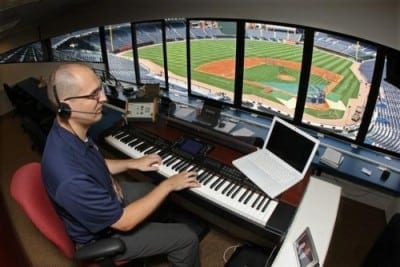 In the first tune on organist Matthew Kaminski’s debut recording as a leader — “Taking My Time” (Summit/Chicken Coup Records) — frothy organ notes bubble in the background as saxophonist E.J. Hughes glides through a sidewinding funk melody. The piece, Lou Donaldson’s “Hot Dog,” places Hughes and guitarist Charles Loehle in the foreground, but it is propelled by Kaminski’s churning, rhythmic comping. While Hughes and Loehle take extended solos, the organist switches between an accompaniment that’s full of kinetic energy and a laid-back carnival shuffle. Donaldson’s composition is a fitting opener for a record steeped in danceable melodies. Organ discs are as much about the main instrument as the secondary players, and Kaminski maintains his supportive playing through multiple derivations of funk and jazz. Electric guitar is an ideal timbral partner for the electric keyboard; the addition of the saxophone, a bright woodwind sonority, brings depth to the sonic picture.

But even though Hughes, Loehle and the other Atlanta-based guitarists and drummers featured on the disc are on the front line, Kaminski is in charge. His playing is full and generous — he can push soloists along during up-tempo songs or provide an ethereal backing for ballads — but, as the leader, he’s careful not to let his sidemen take all the credit.

“Taking My Time” features five Kaminski compositions that display his ability to write intricate, animated melodies. The title song is Kaminski as dirty, swamp-R&B organist, pushing out phrases that wallow in the groove. “Flip the Lid” and “Karoline” echo “Hot Dog’s” carefree party vibe with added modernism; both tunes revel in a tight rhythmic attack amplified by their respective drummers, Emrah Kotan and Mike Hinton.

A Chicago native, Kaminski came to Atlanta in 1998 as a Georgia State University transfer student. School is a jumping-off point for many Atlanta artists — GSU’s music program is a big draw for musicians looking to relocate — and the organist quickly made contacts in the Atlanta music world. After touring around town and throughout the Southeast for a decade, he added a high-profile day job to his resume; on April 5, he’ll start his second season at Turner Field as organist for the Atlanta Braves. At games last year, snippets of “Autumn Leaves” and other standards mixed with rock riffs, baseball-stadium staples and a polka or two. (Turner Field photo by Curtis Compton, from Kaminski’s Web site.)

Kaminski has transferred this on-the-field demeanor to the studio, infusing “Taking My Time” with a crowd-pleasing playfulness that serves as a strong debut for a local organist and another testament to the burgeoning Atlanta jazz scene.