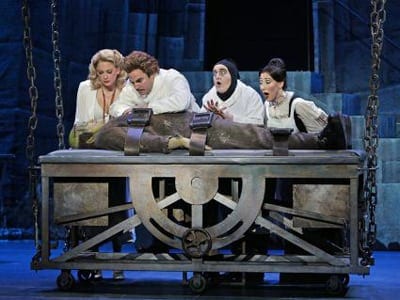 What hath Mel wrought? When Mel Brooks remade his movie “The Producers” into a mega-musical in 2001, he won an armload of Tonys and made more money than God’s hedge fund manager. He also jump-started the unstoppable trend of churning out musical theater based on movies, which has led to the good (“Spamalot”) and the not-so (“The Wedding Singer”). 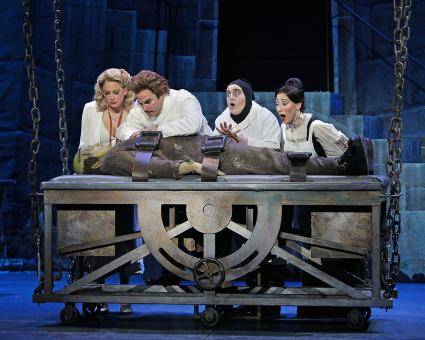 Producers, the real ones, love these shows because the audience already knows and presumably loves the basic franchise. But beware the double-edged sword: The musical also has to compete with the audience’s fond memory of the original, and there “Young Frankenstein,” which is playing at Atlanta’s Fox Theatre through Sunday (Jan. 31), stumbles.

The 1974 original was Brooks’ best movie: a sly, loving send-up of classic monster movies of the 1930s, shot in gorgeous black and white, packed with insider gags and starring Gene Wilder, Marty Feldman, Cloris Leachman, Madeline Kahn, Peter Boyle, Gene Hackman and Teri Garr at their comedic best. The Broadway version, adapted by Brooks the master himself, is enjoyable and not quite the turkey that some New York critics labeled it, but pale and unimaginative compared to both the movie and to what Brooks did in revamping “The Producers.”

Brooks wrote all of the songs, and they sound pretty much the same. The staging and choreography offer plenty of sensory overload, but most of the big numbers have a generic feel, and while the lyrics are frequently clever, there isn’t a memorable melody to be found. With the exception, of course, of “Puttin’ on the Ritz,” courtesy of Irving Berlin. Or, as fans already know it here, “ ’Uttin’ on duh Itttz!”

Brooks also hasn’t added much new humor to the musical, except for some amusing double-entendre throwaways, and what’s here hasn’t been recycled as well as Eric Idle did in “Spamalot.” The two source movies, “Monty Python and the Holy Grail” (for “Spamalot”) and “Young Frankenstein,” are of the same era and have been nearly memorized by devotees, so the element of surprise is gone. But the Python silliness came alive on the stage, while most of “Young Frankenstein’s” jokes feel like they still belong on the screen, like the horses that whinny in terror every time Frau Blucher’s name is mentioned.

The cast for Atlanta is blameless, and a blast. Reprising from Broadway are the actors playing the three main roles: Roger Bart as Dr. Frankenstein, Marietta’s Shuler Hensley as The Monster and Cory English as Igor. They all sing and dance at a level that Gene Wilder, Peter Boyle and Marty Feldman, respectively, could not have approached, but the show mainly made me want to see the movie again, for those loving close-ups of Feldman’s googly eyes and Wilder’s mouth-frothing speeches.