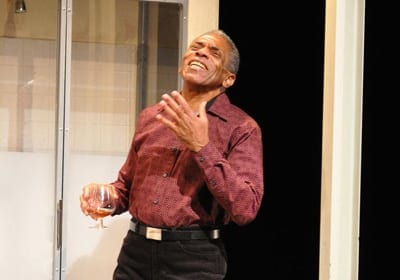 Review: Audiences sour on “A Life in the Theatre” at Alliance

Glitzy musicals of varying quality have dominated the Atlanta theater season thus far. “Come Fly With Me,” Twyla Tharp’s Broadway-caliber homage to the music of Frank Sinatra, received its world premiere at the Alliance Theatre earlier this fall, and Lin-Manuel Miranda’s affectionate portrait of the Latino community — the Tony Award-winning “In the Heights” — just completed a six-day run at the Fox Theatre.

These high-profile productions have made us hungry for some straight-on drama, and we were hoping to be able to tout David Mamet’s “A Life in the Theatre” — starring Broadway legend Andre De Shields and New York actor Ariel Shafir — as a hidden gem. But it’s hard to recommend this lulu.

The Alliance’s Nov. 4 opening-night crowd was stuffed with local thespians, who responded to the characters’ preening insecurities with knowing titters. But when all was said and done, only a few patrons stood to give the performance a standing ovation. For Atlanta’s famously generous audiences, such a response falls somewhere between the inhospitable and the hostile.

If you don’t know Mamet’s psychologically thin, 26-scene two-hander, think of it as a corrosive, masculine take on “All About Eve.” It describes the twisted relationship between a veteran actor (De Shields, at left in photo) and his easily influenced young scene partner (Shafir), who work together night after night in a repertory theater company.

Director Robert O’Hara’s over-embellished style — which plays up the homoerotic tension between the characters and transforms some of the material into camp spectacle — is kind of reminiscent of the work of Kent Gash, the Alliance’s former associate artistic director. When Gash got handed a weak script, his impulse was to jazz up the show with lavish window dressing, outsized performances and unconventional casting. (See “Sleuth” from 2007.)

“Make them applaud the shoe,” Gash once told me, clapping his hands to the imaginary presence of a grand diva, making her entrance with fancy footwear.

Instead of shoes, O’Hara literally dresses his diva in red vampire drag and puts an E.T.-like creature on an operating table. This is like trying to patch up a hemorrhaging script with gaudy masking tape. De Shields’ performance is weirdly fascinating, and the handsome Shafir — who showed off his comic inventiveness in the 2006 Alliance production of Steve Martin’s “The Underpants” — is poorly served here. It’s really not the actors’ fault that the piece is so turgid.

I hash out my problems with the show in my AJC review. It may sound a bit harsh — I called it “a risky, puzzling, borderline irresponsible choice” — but is meant to raise a red flag of concern. The Alliance has had a strong run of successes in recent years, but shows like this aren’t going to do it any favors. Audiences won’t keep spending their hard-earned dollars on such wretched fare. They’ll lose trust. They’ll stay home.