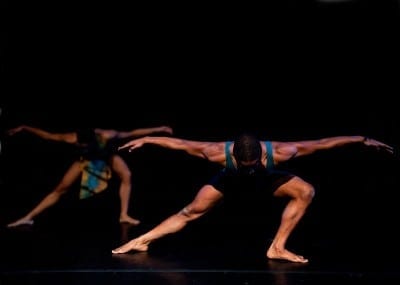 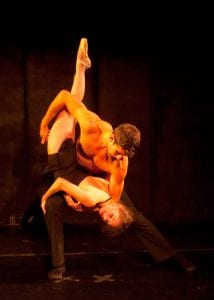 Angela Harris has found a simple formula to bridge gaps between dance forms and to build community — gather skilled emerging choreographers; give them a venue, rehearsal space and professional dancers; let them create.

Works chosen for freshness, innovation and accessibility melded together ballet, modern dance, jazz, African, hip-hop and tap. Because dance styles blended, what could have been a choppy variety show format felt cohesive and continuous. A few orienting words projected on the rear scrim introduced each dance and helped tie the pieces together, while dancers energized the theater with consistently high energy, honesty and generosity.

New York-based dancer/choreographer John-Mark Owen, a native of Macon, Georgia, began the evening’s second half with the outstanding work “Salve.”  Set to Guillame Bouzignac’s sacred motet “Salve, Jesu Piissime,” the contemporary ballet pas de deux explored the onset of a passionate, consuming love relationship. A woman (Ramona Kelley) circled the center, self-protective and vulnerable, while a man (Adrian Silver) paced the perimeter, distant and aloof. They encountered each other from opposite diagonals as in a Renaissance court dance, echoing the music’s soaring voices and deep string timbres with an ongoing, gently binding pressure. Shifting inevitably from one shape to the next, he supported her as she leaned into him, arched away, fell into his arms and rose into a slow, supported leap. He manipulated her up over his shoulder, balancing her at a striking angle, and finally pressed her overhead. Fragile, dependent, she yielded into his unfailing strength.

“Salve” is the first of a three-part work that will be shown April 9-11 at New York’s Ailey Citigroup Theater, presented by Ballet Builders’ New Choreographers on Point series. And recently, New York’s Gotham Arts Exchange chose Owen as one of four emerging choreographers for 2010.

Juel Lane, who has returned to Atlanta after six years working with Ron Brown/Evidence, performed his solo “Window of Love,” to the Boys II Men song “Ribbon in the Sky for our Love” with lyrics by Stevie Wonder. Lane moved like a rippling ribbon, stirring and curling around space as if it were tangible. At times, an invisible band seemed to be an extension of him, as if an imagined partner danced at the other end of the ribbon.

And there were more, as each new work blurred lines between styles. In Lonnie Davis’ “Velocity” — at left, Jane King and Jeffery Duffy — the influence of Baba Chuck Davis’ driving African rhythms blended with modern dance and jazz.

There were passionate performances, like Ebony Williams’ fearlessness in Jelani Jones’ “A Blues for Chocolate.” And the tall, statuesque Jennifer Davis brought an emotional intensity and arresting presence to her duet “In Season of Solitude” and to Angela Harris’ jazzy ballet, “Suites.”

With Dance Canvas, people from all over town — and out of town — shared the stage, the audience and the intimacy of backstage. As the organization grows, it’s likely to need a deeper stage, sight lines that allow full body view, and a larger audience space to accommodate its foreseeable growth. It’s a simple idea: give them a space and let them create.