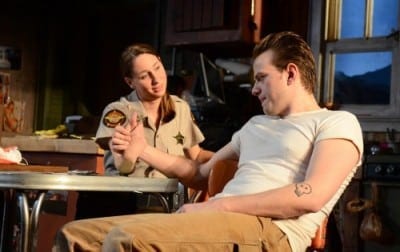 There’s something about Spoon Lake that just gives folks the blues — and possibly a rap sheet. Good old boys are so broke that they turn to burglary to prevent foreclosure on the family home. Cops are so love-struck that they’re driven to crimes of passion that betray the badge. Poor little rich girls are so racked with guilt that they’re tempted to shake down their own fathers to help a brother out.

But as playwright Josh Tobiessen hilariously and endearingly proves in “Spoon Lake Blues,” it’s never wise to go against the family. Tobiessen is a former finalist in the Alliance Theatre’s Kendeda Graduate Playwriting Competition (“Election Day”), and the mounting of “Spoon Lake Blues” marks the first time a Kendeda finalist has returned with new work. 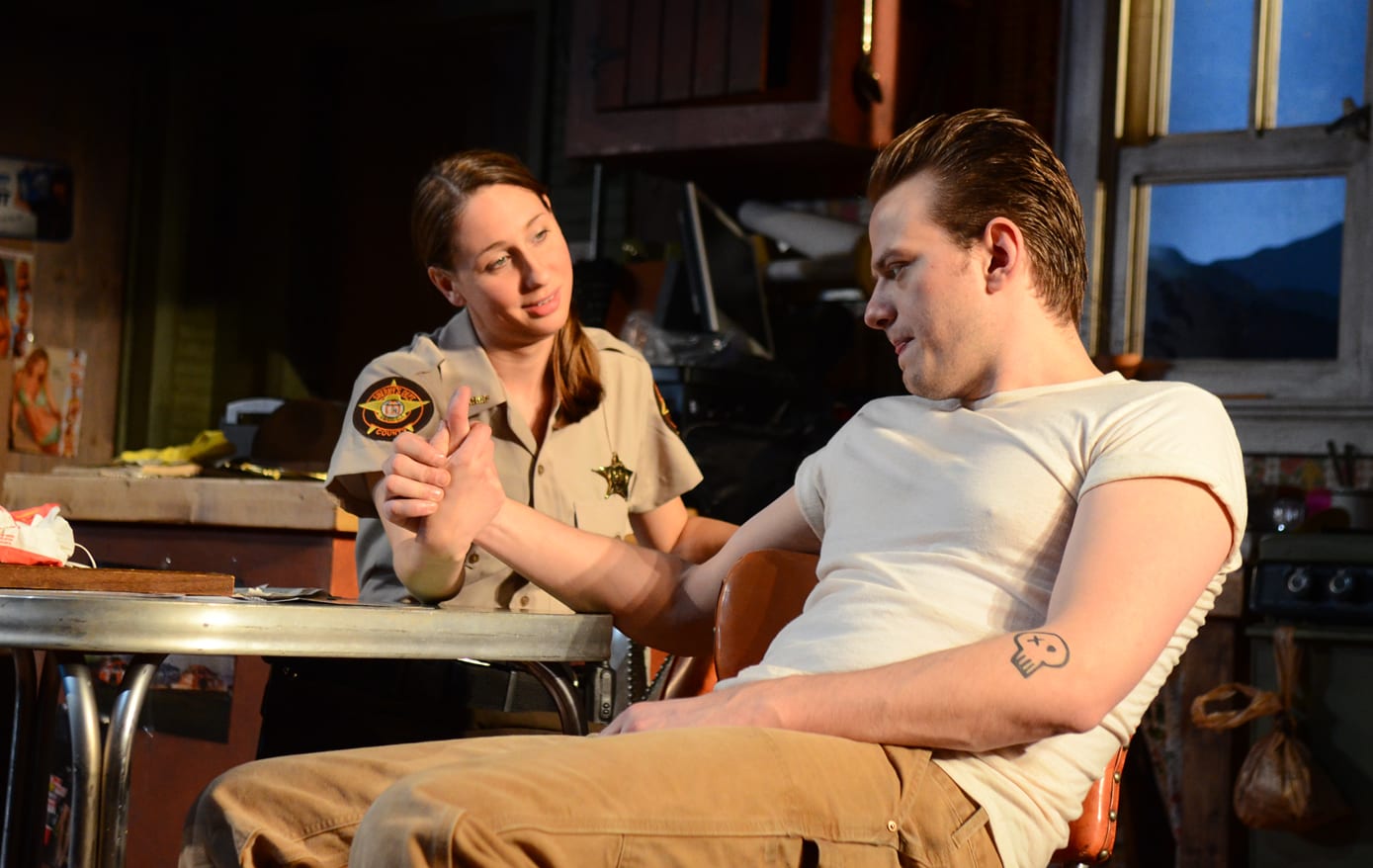 Performed on the Hertz Stage — on a set that suggests Contemporary American Detritus — “Spoon Lake Blues” seemed right at home. Bolstered by a sharp cast and well-paced direction from Davis McCallum, Tobiessen’s comedy deftly plays with how our perceptions of race and class shape our family values. There’s a lot of fun to be had with the current, sometimes silly state of political correctness, as both black and white characters fumble with how to identify the other — and with one another.

The highlight comes early on, when Caitlin (Lakisha Michelle May), a beautiful African-American college student from a well-to-do family, naively enters into the lives of low-slung white brothers Denis (Luke Robertson) and Brady (Jimi Kocina). She doesn’t realize that they’ve just burgled her parents’ summer home across the lake the night before, and the fact that there’s been a racial reversal of fortune makes everyone uncomfortable. 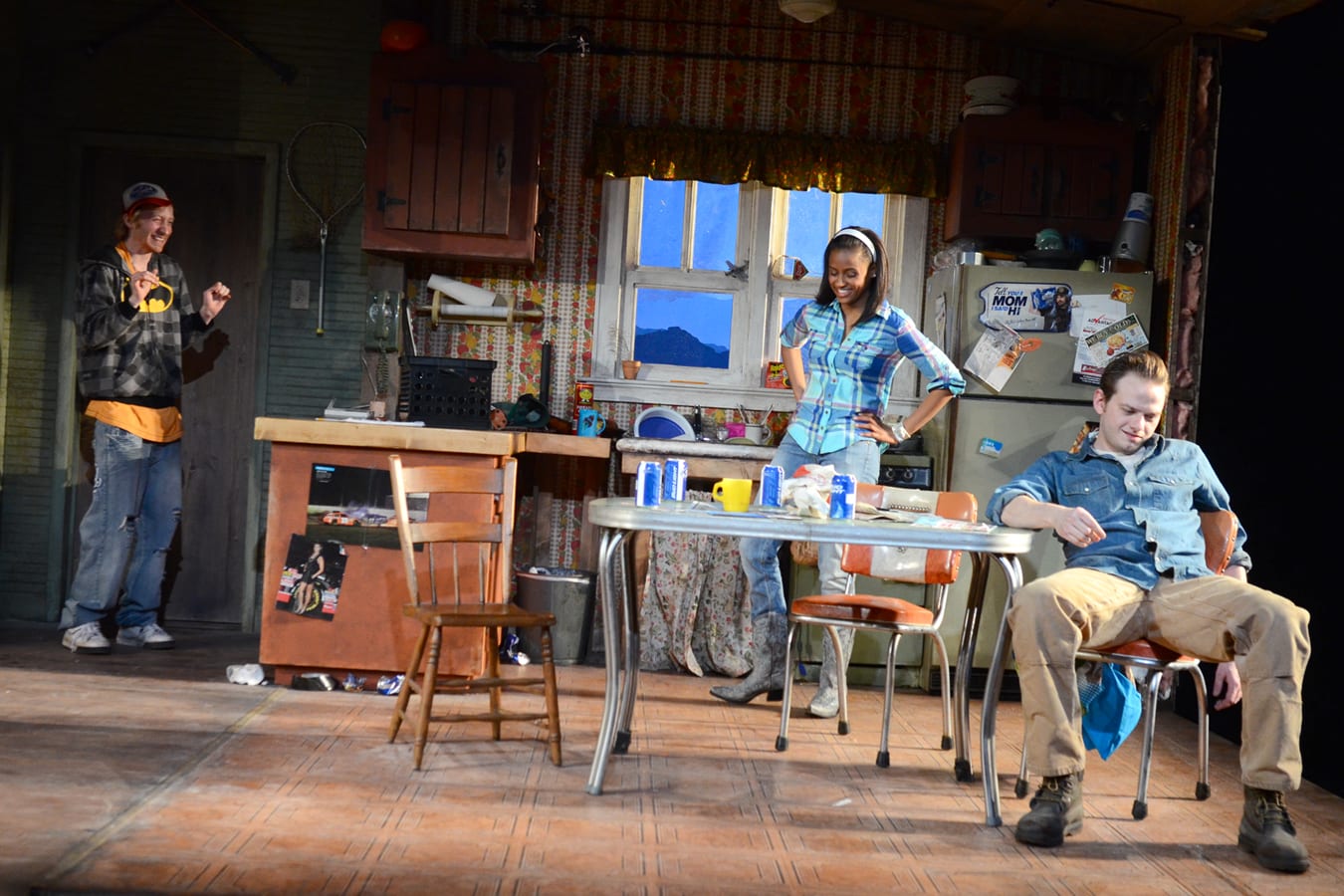 And so begins a rapid-fire dialogue invoking the word “color” in its many manifestations: “colored,” “people of color” and even (to enter another cultural land mine) “colorful people” (read: gay). Brady, a wannabe white-boy rapper, enthuses, “ ‘People of color’ sounds more positive that way.” Caitlin can only roll her eyes, but fumbles to properly describe what used to be known as “poor white trash,” starting off with “It’s nice to meet some real simple people” before ticking off a downward spiral of PC descriptions (“socio-economically disadvantaged,” anyone?). 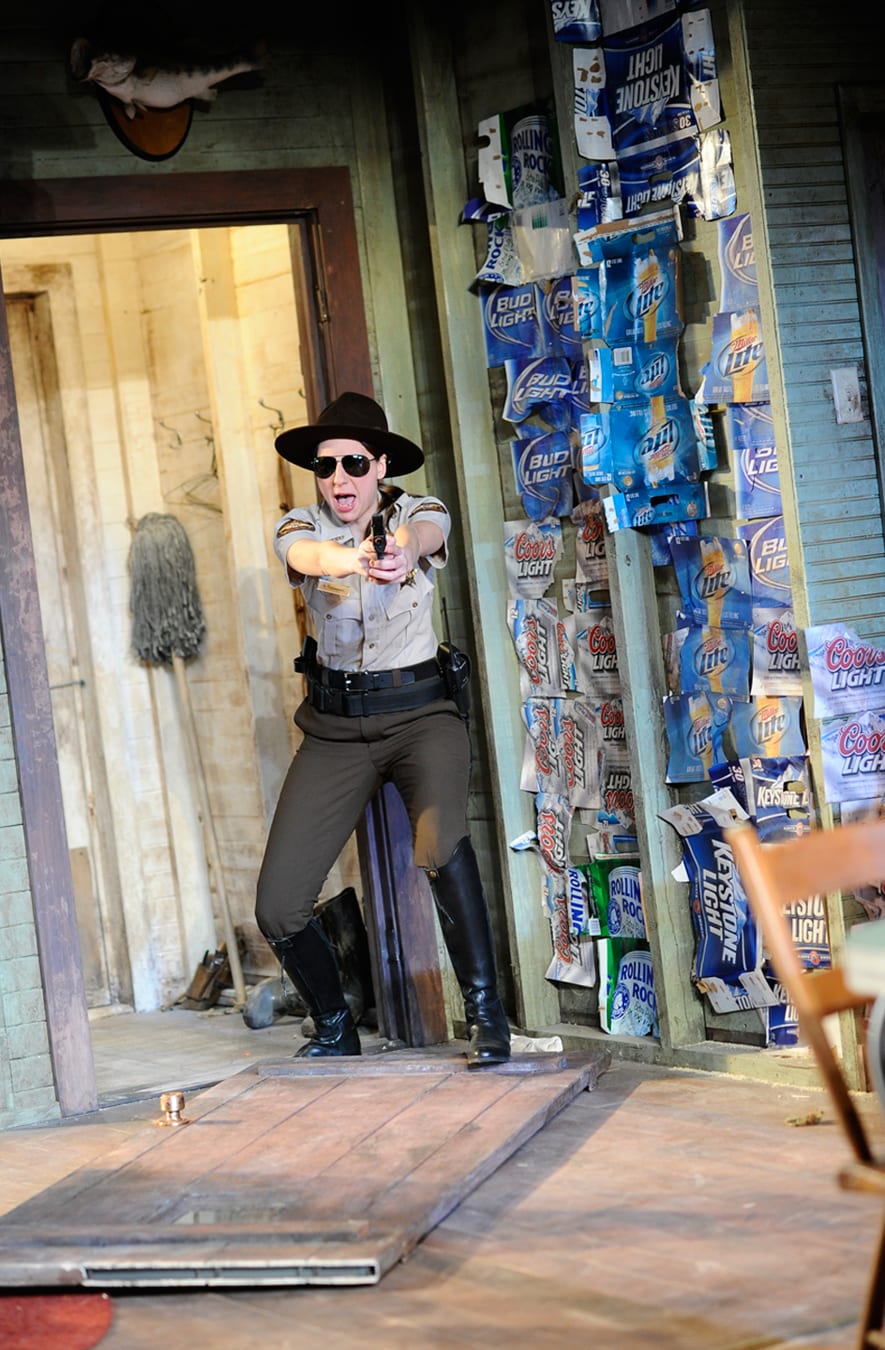 That Caitlin is in the brothers’ shack of a home is one of a couple of plot contrivances that are easily forgiven in this comedy. With the foreclosure clock ticking, the brothers have turned to robbing the homes of the summering well-to-do and working an unknown fence connection arranged by, of all people, town sheriff Abigail (Veronika Deurr). Abigail’s strutting sexual advances toward the embittered Denis mask a deeper longing, but for now she’s content to help the boys in their petty schemes as long as it keeps Denis on her radar.

Brady’s impulse to act on a crush — he swiped a family photo of Caitlin during the heist and decided to chat her up on the beach the next day — complicates everything and everyone. The next thing you know, her social consciousness (or black guilt?) inspires more scheming that could make or break the whole crew.

I confess to being totally jaded when I learned of the set-up for Tobiessen’s work, which easily could have wrecked itself with liberal pontification or other pretentious strains of self-righteousness. Instead, the playwright subtly shows how little things can bring us together: a childhood memory, a long-forgotten blues artist, a family picture. Though the confessions come a little fast and convenient at the end of the play, Tobiessen’s reflections on why a family’s history matters clearly resonated with the audience on opening night.

Really, they were just happy to laugh, and this cast is nearly flawless in its delivery and tempo. “Spoon Lake Blues” is meant to move at a rapid clip, checking in at 90 minutes with (thankfully) no intermission. The script would have suffered from lesser comic performers.

It’s safe to say that Jimi Kocina steals the show as the happily dimwitted college dropout Brady. One moment he’s strutting around the stage, baseball cap askew, doing his best white-dude playa — think Jamie Kennedy from “Malibu’s Most Wanted” — and the next he’s trying to sweet-talk his brother into forgiveness or action, depending on the situation.

Veronika Deurr is Kocina’s comedic match, using her imposing figure to dominate the stage as she barks out “I’m the sheriff!” with arms outstretched in a “come on!” kind of demand. There’s one scene that I won’t give away, but it involves Abigail’s creative use of a blanket, which nearly made Robertson break character and laugh. And May is delightful as a well-meaning rich kid who keeps trying to do the right thing even when it seems wrong.

Robertson as Denis ultimately surfaces as the moral center of a work that initially doesn’t seem to need one. He has the subtlest role, portraying an exasperated George to his brother’s Lennie, a la “Of Mice and Men.” When he reveals what’s eating away at his core — not the money, not the threat of prison time — you start to realize that, when the laughter dies down, “Spoon Lake Blues” is really about family values. And that’s something you can still write about.