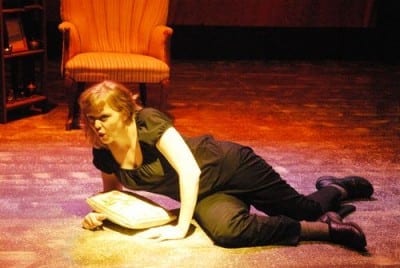 When Synchronicity Performance Group put together its current season, the theater’s budget was “as close to the bone” as it could be, says Artistic Director Rachel May. Then came “Bunnicula,” a children’s story about a vampire bunny that opened the theater’s season September 22.

Hopping along for four weeks on the Alliance Theatre’s Hertz Stage, “Bunnicula” “just didn’t make it in terms of ticket sales,” May says, blaming the busy back-to-school time slot for the slow run.

As a result, Synchronicity has canceled the last two shows of its season: Sarah Ruhl’s “Dead Man’s Cell Phone” and “The Brand New Kid,” a family show. May likes to say the move is a “postponement” and that the shows will be rescheduled in future seasons.

Let’s hope so. Ruhl is one of the finest playwrights working today, and “Dead Man’s Cell Phone” was one of the season’s most enticing titles. And as long as Synchronicity has the rights tied up, other Atlanta theaters probably won’t be able to produce it.

Happily, the 12-year-old group with a focus on women’s stories still has a busy lineup for next year, including the return of the ensemble-generated “Women + War,” the Marlo Thomas family classic, “Free to Be … You and Me,” a women’s playwriting festival and a couple of touring productions.

From now until November 22, you can catch “Hillary Clinton Got Me Pregnant,” a solo show by writer-actor Megan Gogerty that layers national politics and pet mishaps alongside the author’s journey toward parenthood. Gogerty — author of “Love Jerry,” Actor’s Express’ controversial musical about child molestation a few years back — is a terrific writer and performer. Her quirky brand of satire, as I point out in my AJC review, makes her a kind of feminist cousin of David Sedaris. You know this when the Iowa native breaks the fourth wall to offer an unsuspecting audience member an “imaginary cabbage.”

Perhaps that cabbage will turn into dollar bills for Synchronicity.