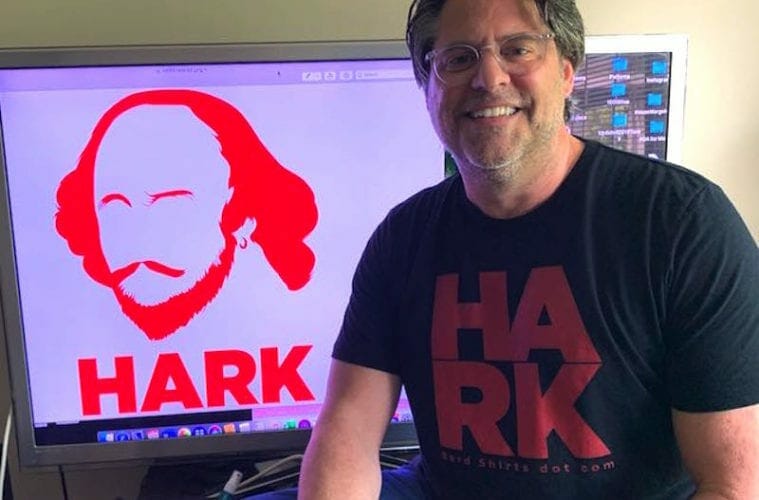 “I wanted it to be reader-friendly and user-friendly and not feel like some scholarly website,” Michael Van Osch says of Hark Journal, which now has 1,000 subscribers. He was furloughed from Georgia Ensemble Theatre in November.

What if the theater world had its own equivalent to March Madness, with fantasy brackets, die-hard fans and yes, plenty of swag?

That was essentially the vision behind HARK Clothing Co. (aka Bard Shirts), a line of so-called “Shakes-gear” launched as an experiment 18 months ago by Michael Van Osch, who spent seven years as vice president of marketing and development at Georgia Ensemble Theatre in Roswell.

What Van Osch hadn’t counted on was a once-in-a-lifetime pandemic that would upend everything, including live performances, and push him ever deeper into the world of Shakespeare. Now the newly minted, bona-fide “Bardolator” (a real term, look it up), runs Hark Journal, which distills Shakespearean quotes into quick, two-minute, brevity-being-the-soul-of-wit meditations. As one reviewer succinctly put it: “It’s like The Skimm but for Shakespeare nerds.”

The idea for the venture emerged in the early days of COVID-19. Van Osch found himself working from home and contending with massive amounts of downtime (GET officially furloughed him in November).

Out of the boredom sprang inspiration. Boredom plus a riveting performance of Coriolanus, one of Shakespeare’s more “B-side” tragedies. An Ontario native, Van Osch happened to be watching a filmed production from Canada’s celebrated Stratford Festival, when one line in particular struck him: “Action is eloquence.”

He decided to heed those words and, for the next few months, built a queue of posts to launch in July.

The more he looked into it, the deeper the pull. Despite occupying theater circles most of his life, Van Osch had never been an ardent Shakespeare fan. In a blog post titled “How Shakespeare Saved Me During COVID Lockdown,” he called Willy Shakes his “10th-grade English class nemesis.”

He didn’t want his effort to be the fluffy stuff of social-media memes. He wanted to take the gems of wisdom and “apply them to our modern world to help others get through the days better,” he says. “I wanted it to be reader-friendly and user-friendly and not feel like some scholarly website.”

His weekday posts have mused on Julius Caesar under the title “Are you moving toward your goals?” and expounded on a villainous Much Ado About Nothing line about “self-limiting beliefs” and encouraging people to see the “inherent worth and dignity” in others even during polarizing times. He found that sentiment while reflecting on Miranda’s famed “brave new world” speech from The Tempest. “It is easy to become disheartened with the world.,” he says. “Life is clearly unpredictable and all of us are flawed. Shakespeare knew that better than anyone.”

The Hark Journal site also features interviews with Shakespearean acolytes like Erica Cantley, author of Teaching Hamlet As My Father Died, or “The Sonnet Man” Devon Glover, a New York City teacher/performer who melds hip-hop and the Bard of Avon.

“There’s a time and a place for everyone to have their Shakespeare moment,” Van Osch says. “I feel like I have learned so much. Compared to scholars, it’s nothing, but I’ve gotten so much out of reading more and watching more.”

The distribution list is nothing to bite one’s thumb at, either, having grown to some 1,000 subscribers, loyal followers who often reach out to share how his emails impact their lives. Case in point: A middle-school teacher recently told Van Osch how his students look forward to the latest weekday installment. On deck is “Shakespeare Stories,” an April Zoom event Van Osch is organizing around celebrations of Shakespeare’s birthday. Each week it will highlight people working on passion projects, business ventures or new shows inspired by the Bard, he says.

(Shakespeare’s birthday often is celebrated as April 26, 1564, though it was probably a day or three earlier, as the Folger Shakespeare Library notes. His official birth date isn’t known. Welcome to Shakespeare learnin’, folks!)

Hark Journal employs Van Osch and two freelance writers in order to keep the prose-and-poetry pistons pumping. And while the work has become almost a full-time job, the project has progressed like a whiffler ‘fore the king, well beyond a  hobby to fill the empty hours.

The newsletter has given Van Osch a sense of shared community at a time when maintaining connections can be difficult.

“You open that door, and there are all of these people who are invested in Shakespeare and welcome you with open arms and want to see what you’re doing and help you with all of this and that,” he says. “It has been nice and completely unexpected.”