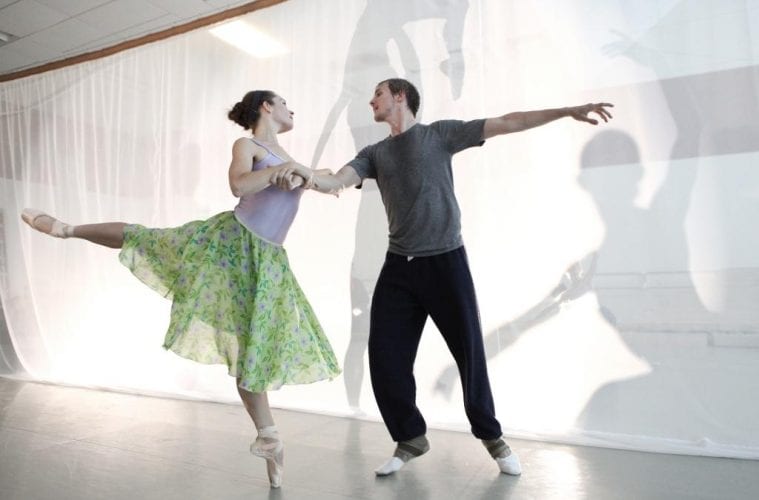 The Twyla Zone: Ballet’s dancers cherish working with Tharp on “Princess and the Goblin”

In a spacious sunny studio at Atlanta Ballet headquarters, dancers are warming up – stretching, flexing their feet in point shoes or breaking into multiple pirouettes, while children cavort, leaping and laughing all around them. In strides famed choreographer Twyla Tharp, a trim, silver-haired pixie, whose authority is unmistakable. She signals everyone to take their places, and without preamble, a rehearsal of “The Princess and the Goblin” begins. Tharp developed the work, which will premiere here on February 10, in partnership with the Atlanta and Royal Winnipeg ballet companies. She choreographed the full-length story ballet, an adaptation of George MacDonald’s fairy tale set to music by Franz Schubert, in Atlanta.

The Atlanta Ballet dancers’ nine grueling but exhilarating months in the Twyla zone was, they say, the experience of a lifetime. “I still can’t believe I’m doing the lead of a Twyla Tharp world premiere in the biggest role of my career,” says Alessa Rogers, who plays Princess Irene, the demanding lead role.

The exceptionally poised, petite 24-year-old beauty thrives on the punishing six-hour rehearsal schedule — which now includes two daily run-throughs of the non-stop, 75-minute ballet — and high expectations. A Tharp dancer must be a quick study with an encyclopedic memory for multiple versions of her choreography. “She comes super-prepared for each and every rehearsal and expects and demands the same from us,”  John Welker says. “She throws out material really quickly, and you think, ‘Oh my God, am I going to get it?’ ”

It was doubly demanding for Welker, who plays two very different roles. As regal King Papa, he uses a strong, streamlined technique. As the evil Goblin King, he deploys Tharp’s special brand of loose and grounded movement.

“The transitions are super-fast. You are constantly flipping back and forth between the characters and the two styles,” Welker says. “Plus Tharp always insists we physicalize what we are feeling. No silent-movie acting.”

Rogers, who takes copious notes and does her homework, appreciates Tharp’s intensity. “She is an exacting choreographer and always wants more out of her dancers. That is very reassuring for me as a dancer, because I know that when I go on stage I will be prepared.”

Working with the world-renowned choreographer was intimidating at first, but the dancers say she put them at ease with humor and commitment to the process. “She just wants to throw away her fame so that we can get down to work,” says Jesse Tyler, who plays the Head Goblin.

Welker and Christine Winkler, 17-year Atlanta Ballet veterans who are married to each other, express gratitude for the opportunity to work with Tharp and originate major roles at this stage of their careers. “I’m glad it happened now,” says Welker. “I think I can appreciate more of what she has to offer.” He also appreciates her respect. “She gave us deference as senior members of the company and put us a little bit in a position of power.”

Tharp started rehearsing last May with Welker, Winkler, Rogers, Tyler and Jacob Bush. She added dancers over time, so that the cast now includes the full company and 13 students from the Atlanta Ballet Centre for Dance Education, who range from ages eight to 15.

Tharp deputized Welker and Winkler to pass on information and work with the other dancers. Winkler would be asked to run rehearsal and, at times, Tharp would say, “I need this worked on; Christine can do this.”

Tharp is famous for creating intricate and athletic duets that require superb partnering skills. As Irene, Rogers dances with several partners and gets thoroughly manhandled. She’s thrown over the shoulders of two male dancers, does cartwheels off their backs and is tossed backward and forward across the room from partner to partner. In a tender duet, two bodies interlace in myriad ways like a cat’s cradle; balance and timing are crucial. (Welker says that Atlanta Ballet Artistic Director John McFall’s focus on partnering has made working with Tharp easier.)

“Twyla turned me on to a whole new way of partnering: use fewer steps and move bigger,” he says. As he recalls, she told him, “When I’m watching the pas de deux, I don’t want to feel Alessa’s weight. I want you to be her cloud. It should be effortless. This girl is on a cloud.”

Tyler, a laid-back sort of dude who sports a thick thatch of spiky hair and sparse stubble on his chin, relishes the goofy yet scary role of Podge, the Head Goblin. “Yes, you are a goblin — and goblins don’t have any rhythm and sensitive, furry feet — but you still have to be an awesome ballet dancer at the same time,” he says. “Ballet is very cut-and-dry with counts; it gets a little looser with contemporary stuff. Twyla wants our input and to find our personal goblin. She instructs us to ‘internalize your own goblin and then express it through the choreography.’ ”

Tyler considers working with the choreographer a watershed moment in his career. He and the other cast members unanimously praise her commitment and devotion to her dancers.

Says Rogers: “Twyla makes you feel your worth, and she treats dancers as royalty. I just loved that she was really for us from the get-go. Twyla said, ‘It’s all about the dancers. You make the production.’ ”