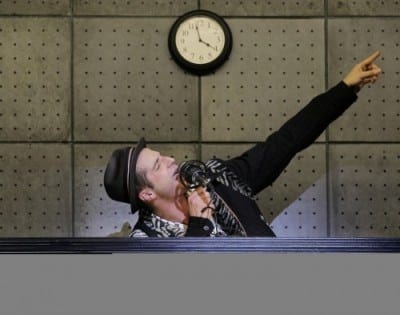 The rich soil around Memphis yielded fertile fields of cotton for decades. And the city’s rich stew of Southern cultures — black rhythm and blues, hillbilly-country,  dollops of gospel and boogie-woogie — was the source of the first stirrings of rock ‘n’ roll. It was in Memphis that a crazy disc jockey named Dewey Phillips started playing “race records” on a white radio station in the early 1950s, and where Sam Phillips (no relation to Dewey) first recorded a white boy who sounded (kind of) black, Elvis Presley. Dewey was the first DJ in the country to play an Elvis recording, “That’s All Right,” and the walls came tumbling down.

“Memphis,” the Tony Award-winning 2009 musical playing at the Fox Theatre through February 5, is the fictionalized story of Dewey the DJ, an exuberant but uneven musical romp that intertwines the civil rights and musical strains of the ‘50s. (A spritz of “Hairspray,” anyone?)

Huey Calhoun (Bryan Fenkart), as Dewey is called here, is an unlikely leading man for a musical. An innocent rube in the beginning, he is slightly spastic in his movements, his voice is a nasal twang, and everything he does is over the top. But this hillbilly with  a heart knows what he loves, and he loves the music coming out of the black nightclubs on Beale Street. And pretty soon he loves Felicia (Felicia Boswell), a singer in one of those clubs. But Huey is white and Felicia is black and this is the South in the 1950s.

When the show opens, a somnolent radio DJ intones, “That was Whitey White and the Whitetones, singing ‘Whiter Than You.’ ” When Huey fast-talks his way into a record-spinning job on that sleepy station, the first song he plays is “Scratch My Itch” by a Little Richard-ish singer named Wailin’ Joe, and we see white teenagers all over Memphis listening to the station. The music stirs their hormones and makes them get up and dance. Soon Huey is the biggest radio jockey in town, then he has his own local TV show, then the national network comes calling.

Felicia Boswell belts out a song.

None of this success makes Huey and Felicia’s taboo relationship any more possible in a time when many states had laws against miscegenation. The show has some problems of tone in portraying the era’s embedded racism, handling it almost breezily for the first hour, then busting loose with some unexpected violence. But even though “Memphis” is mostly upbeat, it can’t be accused of ignoring the ugliness.

The show is structured to give several supporting players big solo moments, and they engage in a tear-off-the-roof competition, with the audience the winner. Gator (Rhett George) busts out “Say a Prayer,” Felicia’s brother Delray (Quentin Earlt Darrington) pulls off  “She’s My Sister,” and Julie Johnson as Huey’s Mama Gladys (that was Presley’s mother’s name) stops the show with “Change Don’t Come Easy.” But, while there’s some wonderful r&b and gospel in “Memphis,” there’s also too much generic Broadway filler. “Someday,” the song that is Felicia’s big single, is weak and forgettable in any era.

Even though there’s a lot going on, the heart and soul of “Memphis” is Huey. Fenkart gives a manic, gutsy performance, so jittery that he makes early Jerry Lee Lewis look like the Dalai Lama. According to Louis Cantor, who worked in Memphis radio in the ‘50s and wrote the Dewey Phillips biography “Dewey and Elvis,” Phillips was a heavy amphetamine user; the crazed speed freak wasn’t just an on-air persona. That historical detail isn’t part of “Memphis,” but it provides a little subtext, and an extra bite to the musical’s bittersweet ending.