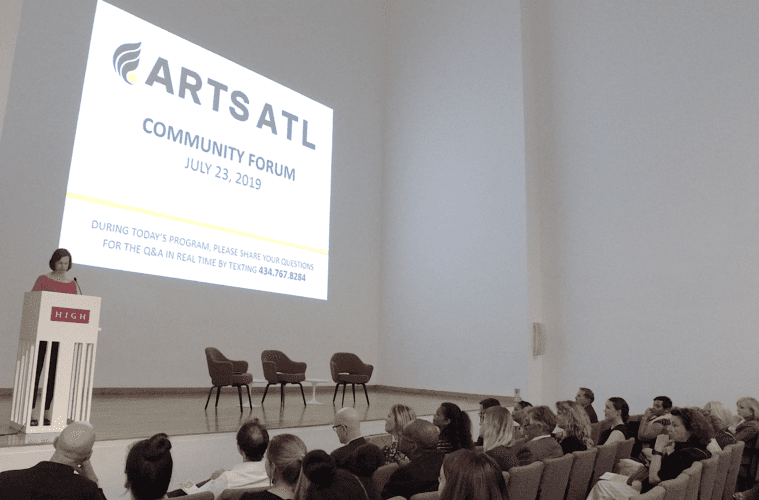 ArtsATL is in the midst of a financial crisis that threatens its existence, and leaders of the nonprofit reached out to the arts community for help Tuesday at a forum in the Hill Auditorium at the High Museum of Art.

“This is a critical moment for us,” ArtsATL Board Chair Rachel Eisaman told an invited audience of about 125 arts leaders. “We are in a financial crisis, and our content is in jeopardy. ArtsATL is the path through which Atlantans of all types are able to access the arts community. The idea of going away is simply unthinkable.”

Eisaman said the crisis came after a decision last year to expand the nonprofit website’s operational model, but the expansion outpaced revenue goals. “We took a risk,” she said. “We have made mistakes that brought us to this point. Perhaps one of the biggest was not building the financial growth to support organizational growth. But we see it now. And we see a bright future for arts coverage in Atlanta.”

ArtsATL laid off four part-time section editors in June and faced the prospect of running out of money by the end of July.

An anonymous $70,000 donation earlier this month staved off that crisis and will enable ArtsATL to continue operations through September. Eisaman said the short-term goal is to match that gift and raise another $70,000 in donations by the end of August.

Combined with advertising revenue and grant money, she said, that will stabilize the online publication’s finances for now. It will give ArtsATL board members and leaders breathing room to focus on molding a solid plan for the website’s long-term financial health.

“We certainly aren’t the first small arts organization to face this,” Eisaman said. “Many of you have shared your own stories of similar challenges in your organizations and how you pulled through it.”

ArtsATL is in its 10th year as a nonprofit. It was cofounded by Catherine Fox and Pierre Ruhe — both former Atlanta Journal-Constitution arts writers and critics — because in-depth arts coverage was one of the first casualties in budget cutbacks at many major newspapers.

Fox said she and Ruhe viewed newspapers as the “public square,” where people gathered to hear news and discuss things going on in their community. “Arts coverage was dwindling,” she said. “Suddenly there was an empty lot where the public square used to be.”

There was no digital precedent for what ArtsATL set out to do — create a website that would provide in-depth news and feature stories about Atlanta’s arts community in addition to thoughtful reviews. Fox retired as executive director and executive editor in 2016 but remains on the board of directors. “I hope there is a future for ArtsATL, and I hope that you do too,” Fox told the crowd.

“We are in a financial crisis,” says ArtsATL Board Chair Rachel Eisaman, “and our content is in jeopardy.” (Video, all photos by Felipe Barral)

Shipman told the audience that ArtsATL has become a vital part of the city’s arts ecosystem. “We need ArtsATL to advertise in, to critique us and to know what’s going on in the arts community,” he said. “If we don’t have ArtsATL, we lose a vital way to communicate with our audience.”

Welker described ArtsATL as “the true hero” in the formation of the Terminus dance company in 2017. ArtsATL embedded a writer with former Atlanta Ballet dancers as they worked to create the company.

“Our goal now is to reach the audience we don’t have, and ArtsATL fulfills that need for us,” Welker said. “It’s not their critiques we should fear; it’s being anonymous and in the shadows because they aren’t there.”

Eisaman said it’s clear that ArtsATL matters to Atlanta’s arts community. She thinks a stronger ArtsATL can emerge from the crisis, with the resources to do arts programming and add editorial staff such as a full-time news writer.

ArtsATL will explore several options for its future, Eisaman said, from maintaining its status as an independent nonprofit to partnering with a university or another media outlet.

The need for quality arts journalism is even greater now than when the website was founded 10 years ago, Eisaman said. “The crisis in arts journalism is nationwide. It isn’t just us. This puts us in a unique position to be trailblazers. You were invited to be here today to help start the movement. We can show the rest of the country how impactful a strong media outlet dedicated to the arts community can be — how it can lift up a community and shine light on our artists.”

To make a donation to ArtsATL, please click HERE.