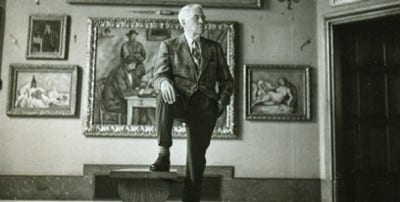 In “The Art of the Steal,” filmmaker Don Argott makes the case that Philadelphia’s power elite ran roughshod over the will of inventor Albert C. Barnes and his defenseless Barnes Foundation to take control of its priceless art collection. The prize: a cache of Impressionist, Post-Impressionist and modern paintings, not only vast in depth (181 Renoirs, 69 Cézannes, 59 Matisses and 46 Picassos among them) but also rich in icons, including “Models,” a rare Seurat; Cezanne’s “Card Players” (both above); and a mural that Matisse came over from France to paint (see below).

The film is a conspiracy tale replete with personal grudges and revenge, racial politics and manipulation in the highest reaches of government. It’s a wonder Michael Moore didn’t get to this first, though Argott is similarly outraged and partisan. The cast of villains makes his work easy. Among them: former Philly Mayor John Street, a man with all the gravitas of Bozo the Clown; lawyer (and Carrollton native) Richard Glanton (right), a self-aggrandizing type so narcissistic he doesn’t realize how transparent he is; and the late philanthropist Walter Annenberg, who gave his own collection to the Metropolitan Museum in New York, with the stipulation that it could never be moved.

Defending the financially ailing foundation and the letter of Barnes’ will is a ragtag band of acolytes, most of whom appear to be as idiosyncratic as their hero but with none of his wealth. They personify the little guy.

Argott is convincing about the collusion of the politicians, self-promoters and foundations, but his indignation about their plans for the collection is going to be a “huh?” moment for many people. Their plot: to move the collection to Philadelphia’s museum district, give it a new building designed by award-winning architects Tod Williams and Billie Tsien, and add the amenities that might make it a self-sustaining institution.

Creating a museum that will allow thousands of people to see the best private art collection in America and benefit the city as a tourist draw is not a heinous crime. One could even argue that the move serves the greater good. This idea is anathema to Barnes’ proponents, who dismiss “tourists” with contempt. But then, that attitude is in their DNA. Barnes, who died in 1951, was anti-establishment to the core. He dismissed the field of art history, which he said “stifles both self-expression and appreciation of art,” public education and the institutional museum.

He established the Barnes Foundation in suburban Philadelphia as a school in 1922, closed to non-students except by petition, which Barnes delighted in turning down. (Over time, the Barnes has offered more access, and it is now open by reservation four days a week.) There, he taught his own brand of art education and used the collection as a teaching tool.

The Barnes is the un-museum. There are no labels, no text, no chronology. He installed the paintings, along with furniture and  decorative objects, to highlight their formal relationships.

Visiting the Barnes, I can attest, is an experience like none other. Though the man’s methodology was lost on me, it was enough to wander, awed, through the galleries, to stumble upon treasure after treasure. One feels the intimate presence, not only of great art but also the mind of an American original.

The art will be fine in its new home. It’s the experience I worry about. The Barnes Web site says that the new museum, which is supposed to open next year, will “maintain the intimate character of the original, distinctive layout.” It has released no plans or elevations, however, so it’s hard to know what that means. Can it survive the inevitably homogenizing force of museum best practices? Even if the galleries were replicated, would it be the same? It will be a terrible thing if the new museum steamrolls the wrinkles out. We benefit from the character of places like the Barnes and the Isabella Gardner Museum in Boston and the experience they provide. There’s no one way to see art.

But institutions have to adapt to survive. Argott argues that foundations such as the Pew Charitable Trusts should have supported the Barnes as-is rather than throwing their weight toward the Philadelphia museum. Is their decision evidence of impure motives, or a recognition that the collection could never have been self-sustaining in its location in a residential neighborhood where visitorship and related revenue streams would always be limited? Or both?

Clearly, it’s a complicated subject. Argott would have been more convincing had he leavened his black-and-white perspective with some shades of gray.