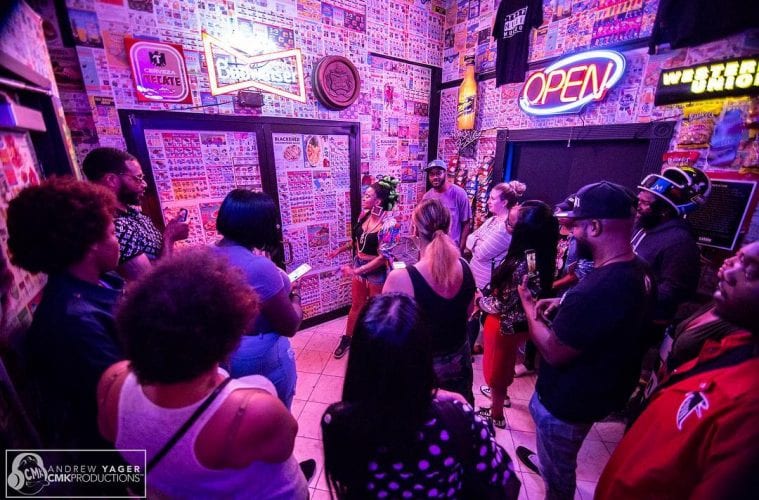 The story behind the pop-up Trap Music Museum begins with an argument over social media. This past spring, Gucci Mane posted a throwback photo commemorating “the day I invented trap music.” T.I. refuted that claim when he posted the art for his own 2003 album Trap Muzik.

Had this public debate taken place 10 years ago, they might have continued to hash out this debate over sneak disses. Instead, last month T.I. opened the Trap Music Museum inside an English Avenue production studio and event space, as a peace offering. “We spend so much time bickering about the minutiae of things that the big picture is missed,” he says. “The big picture is that we all came from selling crack in the ghetto, and we have turned that into something positive and changed the course of living for our families, for forever.” T.I.’s museum boldly reminds visitors of that stark evolution.

The museum’s first few rooms bring trap music’s gritty drug-dealing narratives to life. A convenience store cashier hawks branded hoodies encased in duct tape. Large mason jars of marijuana decorate a coffee table inside a pitch-black living room. And the only notable pantry staple in its kitchen is baking soda. (This is all before the Escape Room, which costs an additional $20.) From there, the museum celebrates the path trap music took from being underground to the center of pop culture, where its biggest players have become larger-than-life figures with platinum album sales and Grammy nominations. So many visitors take photos next to 2 Chainz’s pink ’70s Chevrolet, inspired by the art direction for 2017’s Pretty Girls Like Trap Music, that staff had to instate a rule: Do not stand on the car. Across the kitchen is a life-sized Styrofoam replica of Jeezy’s angry snowman mascot. Schools used to ban sweatshirts emblazoned with the logo, a cartoonish metaphor for a cocaine dealer.

During my visit, a woman posed for a photo next to the snowman, as she held up a cocaine brick, also made of Styrofoam, to her face as if she were on the phone. “I can’t post this,” she said, shaking her head. Yet the Trap Music Museum’s engaging, pop-art approach to depicting the hometown scene’s success almost demands that you do.

It’s tempting to compare the Trap Music Museum to other broadly themed, pop-up “experiences.” But all the Museum of Ice Cream has to offer is a rainbow-colored photo op. The Trap Music Museum picks up from where photographer Cam Kirk’s Trap God exhibition to 2 Chainz’s Pink Trap House left off to provide some more context. You just have to search for it. Past the kitchen, away from the pink Chevy, are glass cases of critical releases and magazine covers from Atlanta resident Larry “Nuface” Compton‘s personal collection. A timeline of trap music’s rise to fame begins with, what else, the 2003 release of T.I’s Trap Muzik, though the accompanying text concedes that OutKast and Goodie Mob helped set the stage. The Trap Music Museum has this caption affixed in a narrow hallway, making it tough to read and absorb without someone else bumping into you from the living room next door. Still, these reminders of how the museum is rooted in an actual culture, as opposed to some cynical marketing ploy, are there and welcome.

The Trap Music Museum is mostly for those who have already been listening intently. It caters to those who already recognize the star power of its subjects, from Dungeon Family member Cool Breeze, whose 1999 album East Point’s Greatest Hit sits in a glass display case, to current Billboard chart sensations Little Baby and Gunna, whose black-and-white photographs are also featured here. Still, the museum is an earnest attempt to celebrate the music’s biggest players. Gucci Mane might not get a wall of his own, but his grade school portrait hangs in the living room.

The museum fills a need, considering how long more traditional institutions take to grant recognition. This past spring, before Gucci and T.I’s social media tit-for-tat, the Oakland Museum of California opened Respect: Hip-Hop Style & Wisdom, a show that only dove into New York and California’s founding Reagan, Bush and Clinton-era contributions.

The week before the Trap Music Museum opened, Maroon 5 was announced as the halftime performers at the 2019 Super Bowl in Atlanta. The NFL selects artists independent of the Super Bowl’s host city. But the same charts-conquering hip-hop artists celebrated by the museum — from OutKast to T.I., Future and Migos — would have made just as much, if not more sense for the slot. Meanwhile, the museum reminds visitors of how trap music, if not Southern hip-hop at large, came into being in the first place. Its key musicians decided to simply create, using their own regional perspective and dialect, without waiting for gatekeepers to approve.

The Trap Music Museum might not be a definitive exhibition. But no one can blame T.I. for wanting to get the archives started.