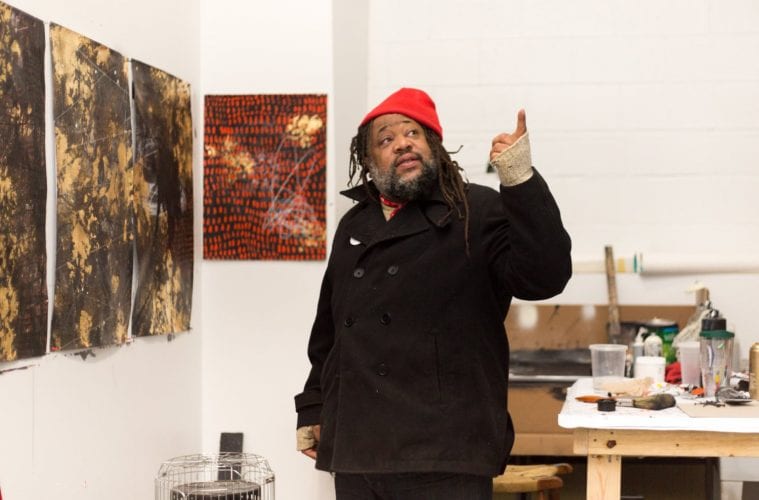 A studio visit with Michi Meko

It’s cold in Michi Meko’s studio when we arrive, but it’s cold everywhere. The bomb cyclone has just hit, rushing 2018 in with swirling arms of freezing air. But Meko fires up a big kerosene heater, and the place slowly begins to warm up.

ArtsATL: How long have you been in this space?

ArtsATL: So it’s still pretty new to you.

Meko: It’s very new because it’s just been studio visit after studio visit. One university came, and there was nothing in here.

ArtsATL: What is this building? What was it?

Meko: It was the old Atlanta tool bank. Before that I think it was a broom factory.

ArtsATL: Is it bigger than your old space? Is that why you moved?

Meko: Oh, totally. My old space was like a bedroom. It was good at the time because it forced me to work in a very intimate space. It forced me to consider scale. Meko: These on the floor. . . . They’re all new directions. They’ve never been seen . . . It’s all about process. It’s a system I’m making by layering, or trying to understand how materials lay on top of each other or in relationship to each other. What happens when you combine? It’s me playing a lot with a material, trying to understand what it can do. It’s trying to find results that I like . . . Some will make it to a frame, some I don’t know what happens to them. I’ll cut them up.

ArtsATL: Did you make them on the floor?

Meko: They’re wall works. I consider them sketches or studies. Most people work in a sketchbook. I just happen to work on giant packs of paper. I consider it like a sketch.

ArtsATL: By the way, congratulations on the prizes. [Meko is the recent recipient of a MOCA-GA Working Artist Project grant, an Artadia award and a Joan Mitchell prize.]

Meko: Completely tripped out . . . I was like, Holy shit, this could be a thing. You can honestly win prizes. I was just setting my studio up then. It was such a crazy time. The craziest part is: I was about to spend all my savings for a show in Tennessee. They announced the prizes a day apart. I just hopped on a plane and went to New Orleans. I didn’t want to stay in town.

ArtsATL: New Orleans is a good place to go to just be someone else for a while.

Meko: It was Prospect 3. I just sort of escaped. I was at this event at the museum, and Ebony Patterson walked by. She was like, “Congratulations.” I started freaking out, like, “You know who I am?” The people that I look up to are congratulating me. Now what do I do? There’s that pressure that comes with that, too.

ArtsATL: Do you usually turn on music when you work or do you like it quiet?

Meko: [He turns on the radio; Anita Baker is playing.] Right now, I’m listening to WCLK. Meko: I’m listening to it because an artist friend, Tomashi Jackson, came to town to do some work, doing a project about the roadways here. It’s going to be a solo show at Kennesaw State. She needed a studio space. She came here and did research and borrowed my studio. Part of her install is going to have this radio station playing the entire time. She came in and set the radio station. I never listened to it before, but I wanted to know what it’s going to sound like when you walk into this space. It’s me sort of having this conversation with her, though she doesn’t know it right now, thinking about her work, thinking about what she’s saying about Atlanta and how the roadways work. I’m very interested in what the soundscape part of that exhibition will sound like. It’s a good soundtrack. It’s a dialogue I’m trying to have with this idea of hers. That’s the sound that’s influenced a lot of the work that’s here . . .  Usually in my studios I have a giant stereo. I just haven’t had a ton of time. I think for this studio I want to build a nice tube stereo. I think I’m going to cut a window out here. I think this used to be a window. We’re gonna cut all that out, and then mount the stereo and the speakers here. ArtsATL: Is all this work in preparation for a specific show? Or is it just work to you, and then once it’s done you determine where it goes?

Meko: A lot of this will go to Chattanooga. I’m going there to do a show. It’s a small space so I think it’s going to be a lot of work like this. I see these as practices working towards the MOCA show. When I was in New Orleans I saw this Andy Warhol with diamond dust on it. It was beautiful. I was like: Let me explore my rococo side. I got this ground-glass. But then, I don’t want to use it in a nice way.  I’m trying to be as abusive to this expensive-ass glitter as I can. It’s something I’m still working on . . . I’m using it like a kid would use it. There’s part of me that wants to waste a large portion of it to figure out what it is I can do with this stuff. Hopefully, I’ll figure out something to do with it.

ArtsATL: Does your show at MOCA have a title yet?

Meko: It doesn’t. I’m going to try to do a couple camping trips into the wilderness, letting that influence the show. What I can tell you is that I want something very poetic, something minimal but also monumental at the same time. I want the room itself to have an emotion, the room itself, not just the work. Hopefully, you’ll walk into the space and maybe see that space in a way you’ve never seen it before.

ArtsATL: How long have you been making work?

Meko: Since I was a kid. I always say since my senior year in high school. That’s when I had my first art shows. [He shares a picture on his phone of high school Michi standing proudly in front of two early paintings.] I think at this moment I started considering myself an artist. I actually sold those two paintings. I put the check on my parents’ refrigerator to show my dad. I remember he was like, “You made all that money? Painting those paintings in your room?” I think that’s when I decided for sure. But I guess I’ve always known I was going to do it. There are a couple moments like that in my life. The very earliest one, I was in church, and a preacher was preaching about the parable of the talents. You know, talents are gold in the story. I asked my mom, “What’s a talent?” She said, “Well, in the Bible, they’re talking about money. But you have a talent. You can draw: that’s your talent.” And I was like, “The Lord ain’t getting this one back . . . I’m going to be an artist.” ArtsATL: When you were growing up in Alabama, were there other artists around, people you looked up to, that sort of thing?

Meko: There was a potter I looked up to. His name was Randal Holland. A lot of people don’t know him, but he was actually a pretty bad-ass ceramicist. He made these vessels where he would make these molds of baby doll’s heads, pushing them through the clay. They looked beautiful. There was something sculptural, something about the aesthetic, that I loved. He was one of my favorites. At the time I was into ceramics and pottery, seeing if you could push that medium away from craft and into fine art. I remember seeing Lonnie Holley at the Folk Fest very early on. They do that Kentuck Fest down in Tuscaloosa. I would go to these festivals and little festivals in my town. You’d see these people, and you’d know that they were artists. I looked up to all of them. There were so many artists. Peter Voulkos was one of these amazing potters that was pushing the craft into fine art. It was becoming less about being utilitarian and more about being sculptural. I was really into that, all the destruction of a Peter Voulkos. He would make these stacks, that’s what he’d call them. They were huge.

ArtsATL: Did you ever meet him?

Meko: I never got to meet him. He was just one of my heroes. A lot of that work still influences this work. He was just this scrappy dude. At the time I was into those monumental clay-makers. They had these craft festivals, and he was like the rock star. Everybody’s centering one or two pounds of clay, and he’s centering fifty. I kind of modeled a lot of my early work and efforts in college after this guy. He just looked awesome. You know that it’s clay, but it’s so fragmented, so far away from what we think about as clay works. That’s the thing I want with the gold leaf, to take it out of its gilded fanciness, to brutalize it. Just tear it up. He was just so rough with the material, so physical with it. Voulkos. He had it. That dude was tough. It’s super-poetic, it’s rough, it’s physical. I think that’s what work is about. How can you make something new? How can you change an object? How can you bring it alive? At some point I’m going to do a ceramics show. Maybe I should do it for my MOCA show. Everyone comes expecting my paintings, and then, there’s my pottery, made from clay I dug from under a mountain.