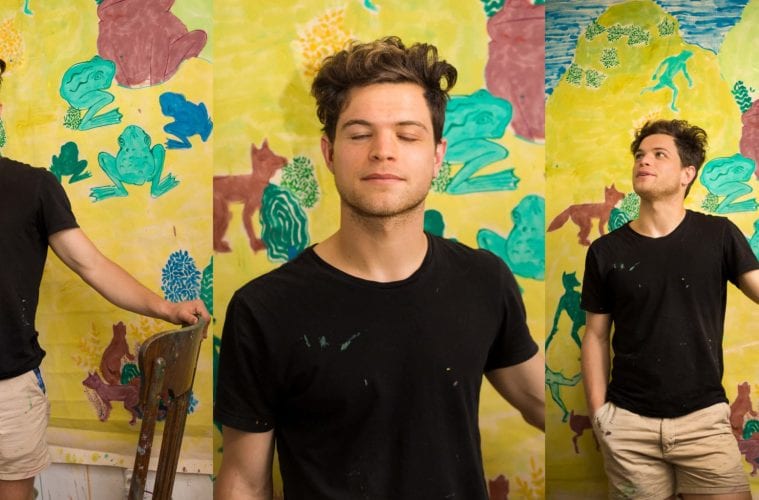 In the studio with Midtown MARTA muralist Andrew Catanese

This May, Atlanta artist Andrew Catanese will create one of the city’s most highly visible works of public art, a mural on the formerly barren concrete walls of the Midtown MARTA Station. ArtsATL met with the painter in his studio at the Goat Farm Arts Center to chat about his process and his plans for the transformation.

ArtsATL: How long have you been working in this space?

Andrew Catanese: I moved in here about two-and-a-half years ago. December 2015. Catanese: It is small. I’m probably going to try to move to a bigger space coming up. Hopefully one that still has a window but probably won’t. It’s a rare luxury at most of the spaces here. ArtsATL: Is a scene like this one from your imagination? It looks almost like an illustration of something from a myth or a folktale.

Catanese: So I was up on Blood Mountain. I was there for a long run. We went from Woody Gap to Neil’s Gap and back . . .

Catanese: I have a 50k next week, which is like 31-and-a-half miles. Four weeks ago was my first 50-mile race.

Catanese: And I won, too. I spend a lot of time out on trails running.

Catanese: I could barely walk for a week afterwards. My ankles were kind of a mess. You have to be kind of crazy to do it. . . . After I go to those places, what happens is I start to paint them. Usually something I’ve read or some stories I’ve been looking at start to bleed into the work. I recently reread Dante’s Divine Comedy twice in the past couple months, so I’ve been painting a lot of landscapes around Atlanta, and what keeps happening is that those narratives keep bleeding into the work. I think this one is going to end up being vaguely Purgatory-like because it’s a mountain. It makes sense to mix those two in together. It’s partly because of the role religion has in the culture of the South . . . . I grew up in a family that was not religious. My family has a lot of academics. All four of my grandparents were professors. Most people in my family have a terminal degree of some kind. But a lot of my friends were religious. I was always interested in the things they felt so strongly about that nobody in my family did. When I was in middle school, I went to church with friends just to see what it was like. When I was really little, my dad read me all of the Greek myths. I heard them all by the time I was six. All of those moral narratives are something I end up working with a lot. I think placing them in the South is useful because that’s the culture I’m interacting with. It lets me talk about what it feels like growing up in a place that you just don’t fit [in]. ArtsATL: It’s interesting you place them in the South. So to you, this is a Southern scene depicting Purgatory.

ArtsATL: And all of these paintings? You would say they’re all set in the South?

Catanese: I would. I use a lot of very specifically Southern plants. . . . Those are going to be rhododendrons up at the top. There’s wisteria. Pine trees. I include a lot of magnolia and dogwoods and daffodils. Any sort of plants I see on a regular basis make their way into my work.

ArtsATL: When you list the flower names, it sounds idyllic, but the paintings are kind of scary.

Catanese: Yeah. I think that’s important because I think a lot of these moral stories are dark and horrible. I think that dichotomy — the beauty of the South and also the horror of it — is why I relate my paintings to the Southern gothic. Flannery O’Connor, Truman Capote, even Poe a little bit, Zora Neale Hurston, Eudora Welty — all of those writers have that sort of idyllic feeling to their writing, but then there are these horrible dark things going on at the same time. It speaks to how things are in the South. Monuments to Confederate generals are a nice shiny way to cover up a lot of horrible things. It lets people pretend that the history was about something very different than it was.

ArtsATL: Did you grow up in Atlanta?

Catanese: I grew up in Virginia. That’s as far north as the South goes. Richmond’s a really Southern city in culture and in terms of its history. There’s a cemetery that loves to advertise that it has three presidents buried there. What they don’t advertise is that one of the presidents was president of the confederacy, Jefferson Davis. They have Monument Avenue, a series of sculptures of confederate generals. Even though the city is liberal now, they can’t do anything about Monument Avenue since it’s a national historic site.

ArtsATL: What brought you to Atlanta?

ArtsATL: How did you first get involved in art?

Catanese: I started taking drawing lessons when I was nine. It’s always been something I have been very invested in. In the way some people play instruments, I’ve always been painting and drawing a lot outside of school and in school, too. I started out as a math-art double major at Wash U, then pretty much immediately transitioned to art. When I moved here, I had another moment when I thought maybe I was doing the wrong thing. I worked at an auction house for a year. That pretty much convinced me I didn’t want to do anything else. Even when I’m wondering if it’s what I want to do for my primary occupation, I end up making tons of work anyway. I suppose it’s just something I’ve always been interested in. ArtsATL: Congratulations on your MARTA commission. That’s exciting. Will you literally be there at the station every day painting it?

Catanese: I will be there working on it everyday with my partner S. Shayne Hargis who works collaboratively with me on all my public work. We’ll also be hiring local artist and Hi-Lo Press owner Dianna Settles to help us.

ArtsATL: When will it be done?

Catanese: It should be done at the end of May.

Catanese: It’s exciting partly because of the visibility. Painting murals is a lot of fun because you get to talk to people while you’re working and explain what you’re doing. I think it’s one of the few times that people get to watch a piece of art being made, and that’s really fun. . . . I think there are benefits to it that you can’t get when you’re making gallery work. The audience is so much bigger. You get people asking all kinds of questions they maybe wouldn’t ask in a gallery. ArtsATL: Will the mural for MARTA have all the flora and fauna that’s here in your studio?

Catanese: With the murals, it’s even more of an aspect of them. I’ve got Bradford pear trees, cherry blossoms and daffodils. I think there are some azalea bushes. I’ve got trumpet flowers.

ArtsATL: Will it have any figures or a narrative scene?

Catanese: There’s a repeating phoenix motif throughout the painting, but there’s no overarching narrative. There are lots of small vignettes, and the overall phoenix motif tying it back to Atlanta. The phoenix is a particularly interesting symbol for the arts community, partly because of the plane crash in the 1960s. In that way, it has an extra resonance beyond it being a symbol of Atlanta. I think it’s also a good symbol because it’s hopeful and forward-looking.