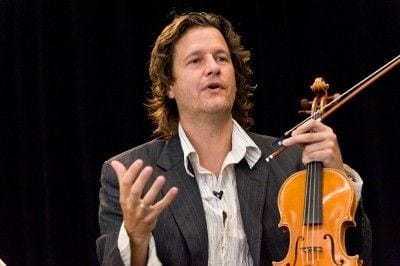 For better and worse, Charleston’s Spoleto Festival USA won’t be the same without pianist Charles Wadsworth, director of the its chamber music series (and the most famous son of Newnan, Georgia), whose retirement was announced last year.

Spoleto general director Nigel Redden named his replacement Sunday night at the festival’s Wadsworth tribute concert. Starting in 2010, Geoff Nuttall, the first violinist of the inspired St. Lawrence String Quartet, will program and host the popular (almost always sold out) chamber music concerts. We might guess that he’ll perform a lot, too, in configurations with his quartet and with other musicians. Nuttall is energetic, deeply musical, hyperactive on stage, Canadian, potty-mouthed, very smart, eccentric.

As Wadsworth’s abilities at the keyboard diminished long before he reached his 80th birthday, he turned up his aw-shucks, Georgia-boy-in-Manhattan persona, and it kept audiences happy. But his tastes often seemed unnecessarily conservative, even fussy. On many levels, Nuttall will have to chart a different course for the chamber concerts.

“Wadsworth has been a beloved festival favorite as pianist and host of the twice-daily chamber music concerts, a role he began 50 years ago at the Festival of Two Worlds in Spoleto, Italy. His innovative programming, inclusion of major soloists, and wide range of repertoire inspired a new generation of virtuoso musicians to perform chamber music. He has introduced generations of audiences to chamber music with his folksy and informal style, and has been credited with transforming chamber music into a popular art form.”