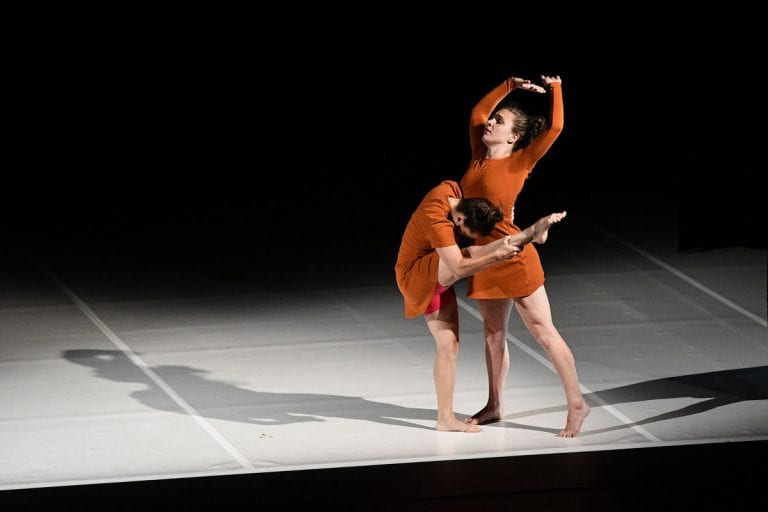 In the style of New York City’s popular Fall for Dance Festival held annually at City Center (now entering its 16th season), Atlanta’s fourth biennial Off the EDGE highlighted a range of contemporary dance and welcomed nationally and internationally renowned companies — from emerging to established — to perform alongside local artists. From sandwich-making to pirouettes to vogue, the culminating night of this year’s Off the EDGE featured some of the best performances in Atlanta so far this year, and one that will likely spark conversation.

In one section, dancer David Rodriguez, thoroughly exhausted from holding partner Ivonne Batanero above his head for the duration of an entire pop song, lay supine as Herrera, Batanero and dancer Loren Davidson lovingly dabbed his sweaty face and body with . . . slices of white bread. With the measured reverence of a religious ritual, the women added deli meat and Kraft singles, building sandwiches on Rodriguez’s body then taking slow, deliberate bites as they smiled at one another over his near-lifeless form. Those with a Catholic upbringing (like Herrera) may have seen a surreal, satirical Eucharist; others may have recognized women communing as they prepared food for a man. Masterfully, Herrera mingled rituals both mundane and divine.

Herrera is an adept craftswoman of duets who knows how to raise the emotional stakes. She charges the time and space between two people: an extended look shared between dancers, a how-did-they-do-that? moment as Batanero slowly walked from Rodriguez’s shoulders down the front of his body to stand on his knees. In the evening’s standout duet, Davidson and Batanero manifested love in its most desperate form. They wrenched each other’s limbs, wrestled out of need rather than aggression (though the two can look similar), their lovesick violence scored by Rocío Jurado’s “Como Yo Te Amo.” In a post-talk, Herrera discussed her Cuban heritage as a catalyst for an examination of this kind of love. “It’s not ‘I love you so much’,” she said sweetly. “It’s ‘No one will EVER love you the way I love you!’” she screamed.

With excerpts of their 2018 work Odeon, Ephrat Asherie Dance offered a different kind of love, joyous and communally shared. The 45-minute piece, presented as a series of vignettes in Act III, featured an arrangement of live music by early 20th-century Brazilian composer Ernesto Nazareth, played by a pianist and three percussionists who shared the stage with artistic director Asherie and six fantastic dancers.

Through the language of African-derived and diasporic movement traditions, the dancers conversed with the musicians, calling and responding. Each of the dancers was featured as a master of one style — Val “Ms. Vee” Ho, the resident hip-hop dancer; Ousmane “Omari Mizrahi” Wiles, the vogue extraordinaire; and Matthew “Megawatt” West, the b-boy virtuoso to name just three — but they all came to party. Fast feet held down the beat as someone took a solo moment then fell back in step. Articulate arm movements, hallmarks of waacking and vogue styles, caught another rhythm. They dove and slid across the floor, effortlessly changing the group formation.

To be sure, these dance styles were born and raised in the club and on the streets, not originally intended for a concert stage where viewers and participants are separated. But Asherie’s keen sense of pacing, flow and staging allowed the energy to move freely from performers to audience and kept us feeling like part of the action. In her post-talk, Asherie noted the role of live music in achieving such a tenuous balance. She said both dancers and musicians, following the traditions of the styles they inhabit, have freedom to play inside a structure. The improvisational element, she said, “keeps it fresh” for everyone.

Carne Viva and Odeon bookended the less intriguing but no less entertaining excerpts from Wayne McGregor’s Atomos and Autobiography, danced by 10 members of his London-based company. Of the two, Autobiography was the more successful, featuring a series of mesmerizing solos designed around the sequencing of McGregor’s genetic code. The solos, personal, quirky and impeccably danced, revealed glimpses of humanity — an invisible force pushed a dancer off balance, he struggled for stability as he melted down and rose up from the floor, and a jolt of confidence charged him toward the audience. But in the group sections, the unrelenting onslaught of flying limbs and undulating spines left little time or space to see, as McGregor notes in the program, “the body as archive.”

Bodies are archives. They hold memories and histories that cannot be erased even if the choreographer intends his or her dancers to represent someone or something else. Kennesaw State University Dance Company’s Pariah, choreographed by KSU faculty member McCree O’Kelley, was the only piece not to include a program note or a talkback to provide insight into the artist’s intention as well as a context for the work.

O’Kelley cast one of the strongest dancers, the only woman of color in a cast of seven, as the outcast, the pariah with a target on her back from the start. Executing tight unison pointe work atop a raised circular platform, the white dancers suddenly tossed the outcast off (her leap was sky high and expertly executed) then caged her underneath as she reached through the bars, desperate to get out while they stalked and taunted her. Later, they knocked her to the ground, her body curled in a submissive posture, hands clasped behind her back as if cuffed or shackled. A white dancer seemed to take pity on her, softly supporting her through tender balances, but it was a trap. Taking advantage of the distraction, another dancer, with red paint on her hands like blood, drew a circle on the raised stage and another added a plus sign — crosshairs to indicate the black woman’s impending destruction. In the end, with the platform tipped on its side to reveal the crosshairs, the pariah climbed to the top and dropped to her death.

As Atlanta’s sole representation on the Saturday night bill, the work is sure to spark necessary dialogue around themes of racial violence, exploitation and oppression.

The Rialto and especially its outgoing director Leslie Gordon, in partnership with Kennesaw State University and Terminus Modern Ballet Theatre, should be commended for providing an opportunity for local audiences to see companies like Rosie Herrera Dance Theater and Ephrat Asherie Dance, both of whom made their Atlanta debut as part of the Off the EDGE festival. The breadth of work performed over three days is unlike any other dance event in the city and will hopefully continue, eventually as an annual festival, to encompass the breadth and depth of local talent both emerging and established.