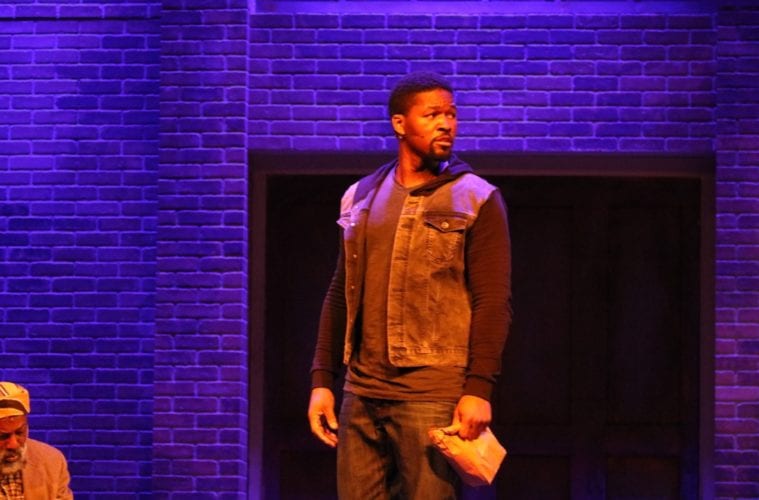 Rob Demery was hooked on acting early, and he says nothing compares to the immediacy and joy he feels doing live theater. The performer has made a name for himself in Atlanta in a relatively short period of time with some high-profile roles in plays such as Fetch Clay, Make Man and Holler if Ya Hear Me, both at Kenny Leon’s True Colors Theatre Company. Demery, who is from Flint, Michigan, says he got into acting when he was nine while appearing in a church play; he liked the applause.

“I realized I could get used to all the attention,” he says. He began his professional acting career when he was 14 in a production of The Watsons Go to Birmingham, where he was an understudy who managed to make it onstage.

Eventually he graduated from Jackson State University in Jackson, Mississippi, with a bachelor of arts in speech communications and theater. An athlete who played football, baseball and basketball, Demery assumed he would go into sports but at some point couldn’t deny his desire to perform.

“I used to hide from acting because it was considered soft,” he says. “I was used to doing what others thought you should be doing.” Demery with his opera singer wife Amber and their daughter

While notching acting roles in companies across the country, he interned at the Black Academy of Arts and Letters in Dallas, completed a residency at the St. Louis Black Repertory Company and served as the head acting instructor for summer camps at New Stage Theatre in Jackson for two years. Eventually, though, recognizing the vitality of the Atlanta theater scene, he and his wife Amber moved here in 2010. When he auditioned for Fetch Clay, Make Man, he was hesitant but realized he was the right person to play the role of Muhammad Ali. He dressed just like the character and in the parking lot boasted to onlookers and other actors that he was the champ — and that none of them were as pretty as him.

“No one knew who I was,” he laughs. “I took the same energy to the room. They came out and asked for the next person. I said to myself that Ali is not going to wait, and I said, ‘I’m ready for my audition.’”

Once he was inside, he realized the room was filled with Kenny Leon, director Jasmine Guy and other industry folk; and Demery knew he had to shine. He went on to win the role and received acclaim for it. Getting in front of Leon was a dream, and the two have collaborated four times now.

“Kenny pushes everyone to be their best,” Demery says. “He is a mastermind at what he does and knows how to get you to go to the trenches, and your darkest and most joyous moments. He’s pulled more from me than anyone has before. He is confident but not arrogant.” Demery has also starred locally in Too Heavy for Your Pocket at Alliance Theatre, Cardboard Piano at Actor’s Express and in a special local version of Our Town with Scarlett Johansson, Chris Evans, Robert Downey, Jr., Mark Ruffalo and some local actors in 2017.

He’s also ventured into television and film. Among his film work, he was an extra in Tate Taylor’s The Help and later appeared in Taylor’s James Brown biopic Get On Up as Clyde Stubblefield. He’s been seen on TV in the likes of The Gifted and The Resident.

He does all of this on top of running Red Light Arts in Riverdale with his wife, who is also an opera performer. Red Light Arts is devoted to enhancing students’ “intelligence, creativity and social skills” by way of productions, workshops and a desire for diversity. Before he finished college, Demery had started a rough version of Red Light Arts. It remains one of his highest priorities — and he wants the company to be part of the landscape of the metro Atlanta scene and engage audiences.

Flexing his writing and directing muscles, earlier this year Demery staged his world-premiere play Revolutionized at Red Light Arts — about three young adults and the problems they face daily such as bullying, gangs and peer pressure. One of Red Light Arts’ virtues is its diversity, and Demery’s looking to open and tour his plays Be Careful of the Traffic and Bad Rhythm next year as well.

“I don’t feel there are enough roles for everyone, not just African Americans, but for Asians and Indians and more,” he says. “With Red Light I have control over what shows we do, and I am hoping to bring equality all across the board. The way that I write is not for a specific race. We stand for that. No show is for one specific audience.”

He loves working with his Red Light Arts students, both children and adults. His goal is to motivate them and help them grow — inside the classroom and outside — and be a role model when needed. He’s particularly proud that one of his students, Jahzir Bruno, has gone from making commercials a year and a half ago to landing a plum movie role. Bruno is currently in London filming Robert Zemeckis’ remake of The Witches with Anne Hathaway and Octavia Spencer.

“I think one of the reasons I am [successful] is that I’m not afraid to give away secrets,” Demery says. “I never stop learning, and I will never feel like I know it all. As long as I am a student, I can be a teacher, and the more I learn, the more I can give.”