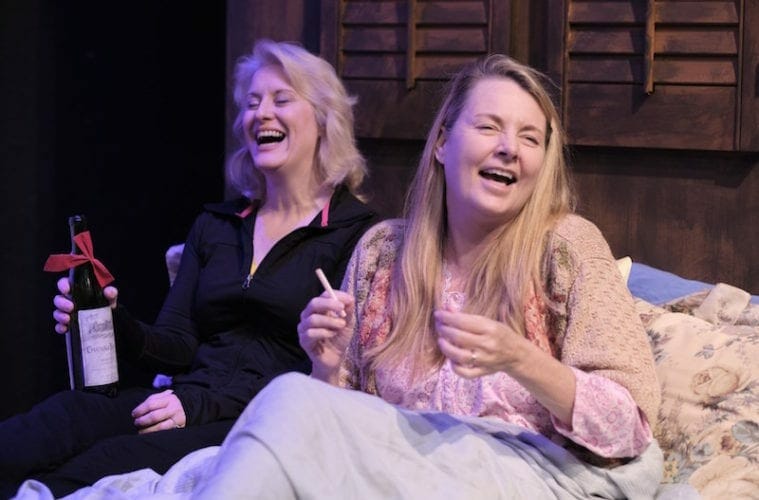 Kelly O'Neal (left) is Scarecrow and Elisa Carlson is Woman in Irish playwright Marina Carr's elegiac "Woman and Scarecrow," which explores themes of death, remorse, jealousy and forgiveness. It's at Arís Theatre. (All photos by David Carlson)

Review: “Woman and Scarecrow” at Arís Theatre walks on the dark side of Irish life

Themes such as death, remorse, jealousy and forgiveness run heavily through Arís Theatre’s new drama, Woman and Scarecrow, a talky, elegiac drama by Irish playwright Marina Carr. It has a fascinating concept, but the production itself feels harsh and overwhelming.

Arís originated six years ago to produce classic and contemporary Irish/Celtic-themed theater, filling a void left empty by the demise of Atlanta’s late, great Theatre Gael. Alas, Woman and Scarecrow (through October 6 at 7 Stages’ Back Stage space), is not one of its stronger endeavors.

The drama takes place in a bedroom, where Woman (Elisa Carlson) is waiting to die. She talks to a person she calls Scarecrow (Kelly O’Neal). Woman is visited from time to time by her husband, named Him (Robert Shaw-Smith), who checks on her medications, and by her Auntie Ah (Amanda Taylor Brooks). Looking back at her relatively short life, Woman realizes she has made some horrific choices. Robert Shaw-Smith as Him and Elisa Carlson as Woman, his wife

Carr is a prolific playwright with almost 30 plays to her credit. She’s best known, perhaps, for her 1998 drama By the Bog of Cats. In Woman and Scarecrow, she uses symbolism and some Irish mythological themes. The Scarecrow — as it becomes apparent early — is some sort of intermediary. Although the mythology is new to me and not entirely clear, it’s far less problematic than the tone of the piece. It’s an angry show, one that’s almost suffocatingly morose. As written, Woman and Scarecrow is supposed to be a black comedy, but the performers don’t draw much humor from the play’s inherent heaviness. This spare, four-character production takes place in one location and is directed by longtime Atlanta actor John Ammerman, of Theater Emory. As such, it trusts its text but becomes repetitive and off-putting. With the main character constantly complaining and arguing and regretting her life, it’s a lot like one long moan. The play runs for just over two hours but feels much longer. Contrast that with Theatrical Outfit’s The Laramie Project, which lasts 2.5 hours and feels half that long.

Carlson captures the brittleness and sadness of her character, yet Woman is neither interesting nor sympathetic enough to drive the narrative. For much of Act II, the performance goes overboard.

O’Neal is much more palatable as Scarecrow, and Theatre Gael alumnus Shaw-Smith, one of the company’s founders but making his Arís debut onstage here, finds some depth as the villainous husband. One rare resonant moment finds him curled in a ball next to his wife having a heart-to-heart about the past and their feelings toward each other.

It’s hard to criticize a smaller company, but Arís has done much better. In 2018, for example, it produced Stephen MacDonald’s lovely Not About Heroes, a Suzi Bass Award-nominated ensemble drama about soldiers and poets. There’s no denying that the award-wining Carr can write exceptionally well and devise stinging, observant dialogue, yet, ultimately, Woman and Scarecrow drains and depresses.