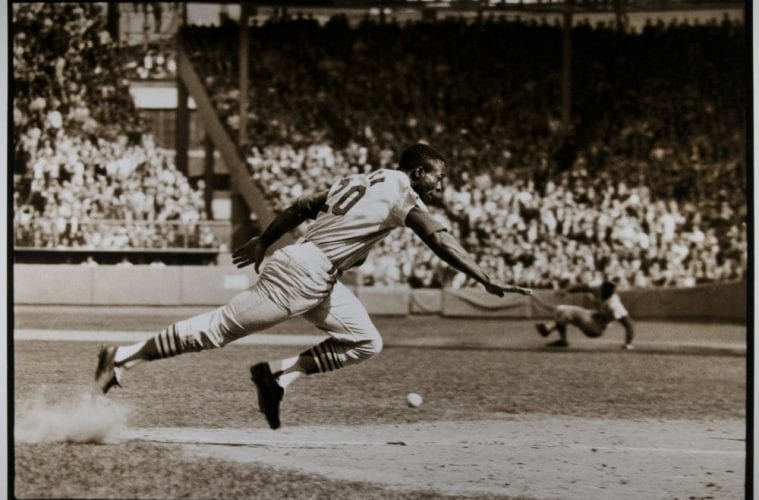 Review: Walter Iooss captures the beauty and struggle of the sporting life

Born in 1943, Walter Iooss has only ever had one job: sports photographer. For nearly 60 years he has worked the sidelines, endzones, fairways, ringsides and dugouts, capturing some of the most well-known and evocative images of our sporting life. A small number of his baseball images are presented in Emory University’s Michael C. Carlos Museum’s Works on Paper gallery, through January 7, 2018.

The images in the gallery, a recent gift to the permanent collection, span 60 years of baseball history and include in-game shots that capture the suspended moment between stillness and motion that characterizes the game, as well as portraits of baseball legends in heroic poses: Willie Mays, Hank Aaron, Joe DiMaggio, Ted Williams, Yogi Berra, Whitey Ford, Sandy Koufax and Lou Brock.

The exhibition includes a favorite shot of the photographer’s, street kids playing stickball in Havana in 1998. This shot and Iooss’ series of photos of child kickboxers taken in Thailand illustrate his fascination with play in its purest form. He sought to capture “the dreams of the kids, the joy of sports” while also inevitably catching sports’ inherent portrait of humans striving against one another. 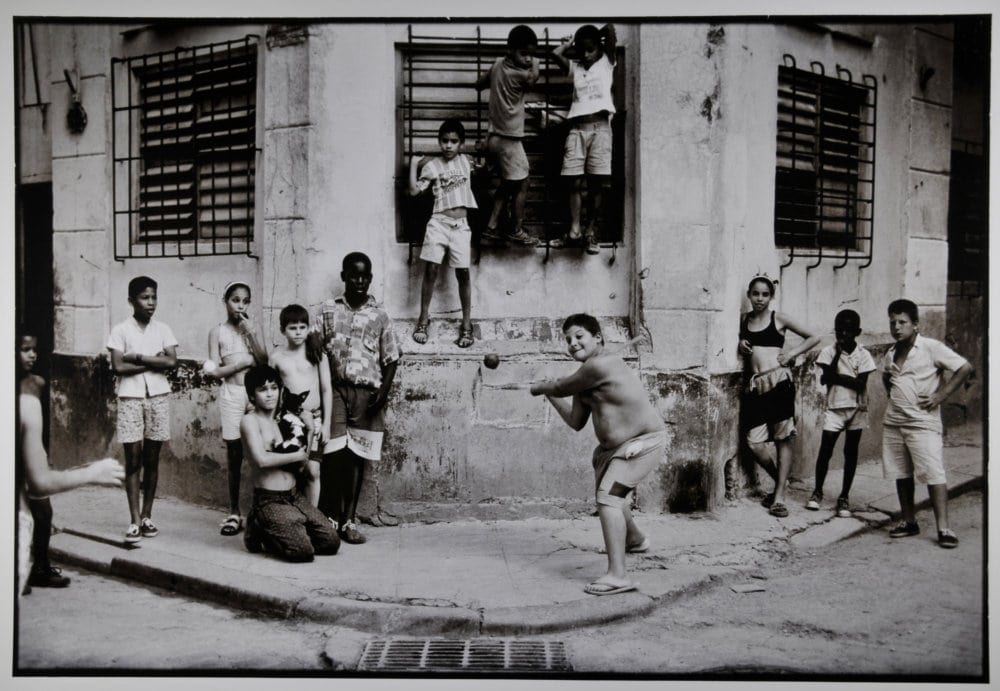 The joyful aspect of sport is inexplicably connected with competition: even excluding an “other” against whom an individual directly competes, there is still the joy in striving against the perfection of the game itself. In the photographer’s work one sees his competitive spirit in both of these senses: he sought the perfection of his craft and of his profession.

Raised in East Orange, New Jersey, Iooss is no-nonsense about his work, a point of view rooted in “the assignment” as well as a northeastern, mid-century male sensibility. His job is to get the shot, with the ultimate goal of getting “the cover” — and over his career, Iooss’ work has been featured on more than 300 Sports Illustrated covers. “The assignment,” however, was an opportunity for journalism and commercialism in sports magazines, as well as for engaging creativity and pursuing beauty in narrative and human forms.

While still in high school, Iooss shot his first roll of film with his father’s 300mm lens at a New York Giants football game and became “consumed by sports and form.” A good work ethic, perhaps, used the fixed objective of the assignment as a discipline for seeing and constructing from what is seen.

On October 3, Iooss visited Emory for a conversation with Andi McKenzie, curator of And Something Magical Happened: Baseball Photographs at the Carlos Museum. As they talked through a small sampling of the photographer’s images from a range of sports and also including portraiture, I was struck by these two aspects of Iooss’ photographic approach: formalism and competitiveness. Both qualities are essential to success in sports and commercial art. Thus, when Iooss claims, “The angle I shoot is the best angle. There are no other angles,” the statement is a mix of professional bravado and ingenuous artistic sensibility.

Iooss’ competitive approach impressed Michael Jordan, who said of working with him, “I wasn’t the only professional in the room.” The trust and respect of great athletes is a kind of male bonding, as well, recognition by the alpha that you have value. The stories behind the photographs frequently express aspects of this relationship, as when he photographed Tiger Woods, and intentionally stood directly behind him at the driving range, well within Woods’ comfort zone. “I decided I wanted to get in his face,” Iooss said. “He wants competition? He’s gonna get it today. This is the way I’ve always felt. It’s a game. I’m ready to play it with you, and I know you’re ready to play it. Competition is all athletes care about, outside of money and sex.”

Sports journalists want to be close to the action and the athletes: their work occupies the interplay of news, celebrity, hero worship, advertising, partisanship and art. But at base, Iooss sees photography as a game, sports as a game, life as one as well. And he aims to win it.

Looking through Iooss’ work, I was reminded of a book about Japanese art, The Male Journey in Japanese Prints. His photographs are largely of men, and images of men in sports convey the range of the male experience. Iooss expresses a streetwise, tough guy attitude about his work: male bonding over battles, victories and defeats. Spanning decades in the careers of athletes, Iooss’ images are also a biography of men: his famous portrait of Muhammad Ali and Joe Frazier (a gorgeous large-format Polaroid) depicts two aged warriors, both still gleaming with pride. Iooss himself had a rival, fellow Sports Illustrated photographer Neil Leifer. Through the decades, they fought for cover images, and Leifer’s success pushed Iooss.

Iooss became known for seeming to do less preparation than other photographers and still produce great work. His description of this approach has the air of wishing to avoid sounding fussy or precious about his job. That said, Iooss spoke proudly of some of his off-the-cuff innovations: e.g., breathing on his lens to fog it, then shooting at just the moment as the fog lingered on its edges, creating an atmospheric halo effect.

Leifer called Iooss “the only real genius there has ever been in sports photography.” Iooss’ sensitivity to form extends behind the playing field. “If the beauty’s there, I want to take a picture of it,” he says. “I could be anywhere.” Iooss takes special interest in using background color to frame his shots, as in his photograph of Tony Scott and Garry Templeton in the dugout at Dodger Stadium. He relates how, having seen the new light blue paint job at the Stadium, he waited for the visiting Cardinals with their powder blue uniforms to get this picture. 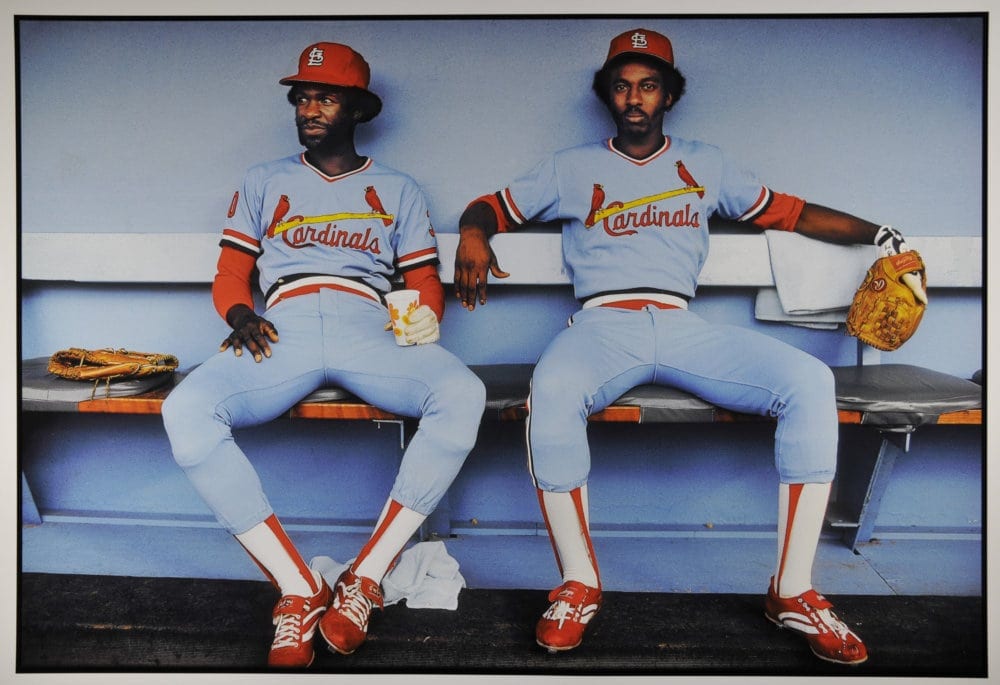 Henri-Cartier Bresson’s “decisive moment” comes up frequently in consideration of sports photography: an instant in time captured that conveys within that instant an immediate significance. Just as a person has to bring to one of Cartier-Bresson’s images a heart or mind able to see in that captured moment pathos, humor, irony or some other deeply human aspect, it takes a sports fan’s interest and knowledge to grasp what Iooss snares in his pictures. Iooss’ instinctive ability to get the shot is thus about both his sense of beauty and his intuition about sports.

Writing about sports photography from the standpoint of a dichotomy or comparison with art photography is fruitless and misguided. The overlap between attributes and qualities, technique and aesthetics, intent and consumption, are too significant. In fact, one sees a rather striking parallel between sports fans and art fans. Both are fiercely partisan and attach personal identity to the claimed superiority of their own choice. The vicarious pleasure a sports fan feels through an athlete and the aesthetic pleasure the artist transfers to the viewer through his work are structurally similar. Sports and art-making are valued both for their performance and for their results. The personality of the artist or athlete often plays a role in a fan’s appreciation for their work. Artists and athletes compete with one another, and also strive against form itself.