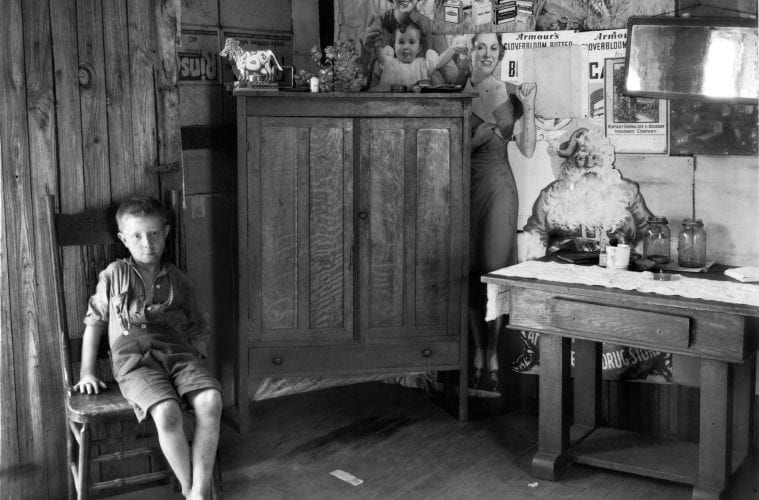 Review: Walker Evans’ retrospective is as iconic and remarkable as ever

A major retrospective of Walker Evans, one of the most influential documentary photographers of the 20th century, is currently on view at the High Museum. Its opening on June 11 coincided with that of The Rise of Sneaker Culture, an exhibit showcasing a spectacular display of 150 sneakers, among them some of the hottest shoes from private collections.

While attending the media preview for both shows, located in the museum’s Wieland Pavilion, I found it amusing — if not surprising — to notice how the crowd of young reviewers and bloggers flocked to the Sneakers’ exhibit, seemingly finding it more hip than Evans’ black-and-white images from the Great Depression.

This is not to say that Evans’ exhibition will not receive the attention it deserves. It is a high-caliber event that offers a thorough examination of his work on a scale not seen since the Metropolitan Museum of Art’s retrospective in 2000. The show, Depth of Field, features more than 120 photographs from his early work all the way to his rarely exhibited color Polaroid images from the end of his career in the 1970s. A sizable number of photographs are on loan from Atlanta residents and private collectors Marian and Benjamin Hill. The High will be the only venue in the United States to host the exhibit, and this alone is remarkable.

Evans is mostly known for his commissioned work with the Farm Security Administration (FSA) during the 1930s — the iconic portrait of an impoverished mother, posed against the clapboards of her home, comes to mind. But even if the 1930s were the most productive time in his career, his work cannot be reduced to that period alone. This exhibit is a tribute to the intricacies of his vision.

In all truth, Evans’ visual language is not easy to decipher. Many viewers may question what there is to see in some of his images of buildings or interiors. Evans’ style often favors a precise frontal approach and a lack of perspective. He liked to capture interiors void of people. There is a severity and an economy of means in his work that can be inaccessible.

By taking a chronological approach to his work, Depth of Field allows the viewer to follow Evans’ evolution and, in turn, put it in a historical perspective. At the same time, the exhibit is cleverly structured around clusters of work that group images related to topics and aesthetics, which alludes to Evans’ way of thinking in series.

His early work — presented in minuscule prints that force the viewers to get very close — shows his initial attraction to European Modernism and the so-called New Vision, which stressed bold, unconventional perspectives. But soon after, Evans leaned toward the viewpoint of the man in the street rather than that of the skyscrapers of New York City. He drew his inspiration from the work of two major Europeans photographers of the early 20th century: Eugène Atget and August Sander.

Modern European literature played an equally important role in developing Evans’ visual style. Charles Baudelaire, who praised the beauty of ordinary life in the streets, and Gustave Flaubert, who championed the idea of objectivity and the removal of the author’s perspective, were two favorites. Evans liked to quote Flaubert’s maxim: “Things take on a richer appearance and have a deeper effect when they are left untouched, as it were, in their own reality.”

Evans adopted this objective approach for the rest of his career and it would define his distinctive documentary style that he called “lyric documentation.”

In “Negro Barber Shop Interior, Atlanta, Georgia,” 1936, for example, Evans chose to capture a barbershop void of customers. He framed the room with two barber chairs and a wall behind, covered with simple objects. The absence of people in the photograph suggests their presence, possibly in a stronger way than if they were there. This photograph, along with iconic photographs of tenant farmers and their families in Hale County, Alabama, were part of a series initiated by an assignment from the FSA in the American South.

Evans favored functional artifacts and ordinary objects, sometimes with a taste for the uncanny and bizarre. “I lean toward the enchantment, the visual power of the aesthetically rejected subject,” he said during an interview with Yale students. Similarly, his lifelong fascination for signs and lettering led him to photograph countless images of vernacular advertising, in an attempt to lift the ordinary to a deeper meaning. This is the case for “Roadside Gas Sign,” 1929, shown here as a large-scale print made in 1971 from the original 1929 negative for a retrospective exhibition at MOMA. But this is also visible in other bodies of work in a less conspicuous way, such as in “Greek Temple Building, Natchez, Miss.,” a piece within his series on Antebellum architecture in which he deliberately positioned his camera to reveal the painted word “SIGNS” on the marble façade of an elegant structure.

The show would not be complete without showcasing his series of portraits, ranging from the striking faces met in the streets of Cuba in the 1930s, to the New York subway portraits of 1938-1941 (the creation of which necessitated Evans’ concealing his camera inside a heavy topcoat) and his absent-minded self-portraits. He experimented with different equipment, switching his heavy large-format camera with a 35 mm camera and a fast lens. At the end of his life, he “felt wildly” with a color-film SX70 camera. But whatever the medium or the project, Evans’ descriptive approach remained strong and he stayed true to the idea that the physical world can be seen deeply with a simple, unvarnished photograph.
[add_single_eventon id=”84208″ show_exp_evc=”yes” ev_uxval=”3″ ]