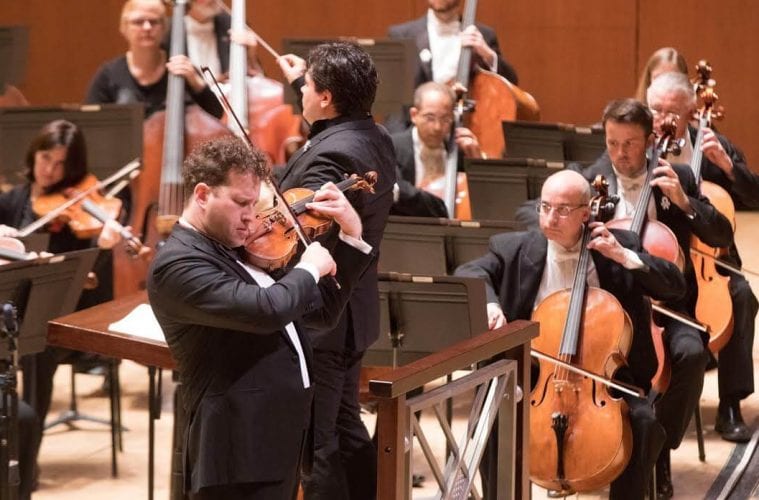 On Thursday evening at Symphony Hall, the Atlanta Symphony Orchestra performed a concert of music by Enescu, Shostakovich and Tchaikovsky, led by guest conductor Cristian Măcelaru and featuring violinist Nikolaj Znaider as guest soloist. The program will be repeated twice, Friday evening and Sunday afternoon, at Symphony Hall.

Măcelaru and the ASO opened the concert with George Enescu’s Romanian Rhapsody No. 1. It’s the first and more often played of the two Romanian Rhapsodies for orchestra that comprise his Opus 11, written in 1901. It is rich in exotic coloring and the shifting modal scales characteristic of Romanian lăutărească music, the folk music traditionally identified with Romani musical clans known as țigani lăutari. On the one hand, that places the music within the same sphere of “Gypsy” music as the Hungarian Dances of Brahms, but it possesses its own distinct regional flavor. A native of Romania, Enescu is often regarded as that country’s most important classical composer.

The piece began with 12 bars of slow, languid folk-tune in the clarinet, played by principal Laura Ardan, with responsive figures in oboe and flute, before other winds, strings and two harps joined in to develop a more rhythmic texture. The piece picked up a fast pace for much of its duration, with emphasis on whirling dance rhythms, sometimes going into “barn burner” mode when passages seemed less interesting (there are far too many chromatic scales in the score that seem more décor than substantive), but the driving, episodic piece for the most part made its impact as an audience-friendly curtain-raiser.

The ASO then turned to Dmitri Shostakovich’s Symphony No. 1, completed in 1925 when he was 19 as his graduation piece at the Petrograd Conservatory. It’s a competent piece for a composer of any age, foreshadowing the composer’s mature style and temperament, but it’s not among my favorite of Shostakovich’s symphonies. Written in rather a conventional symphonic form, it ranges in mood from grotesquely comic mockery to weighty somberness — in general, reaching into the dark side of the emotional scale — across its half-hour duration.

Hillary Hahn was originally scheduled to play Tchaikovsky’s Concerto in these concerts, but canceled back in January when she became pregnant with her second child. Taking her place is Danish-born violinist Nikolaj Znaider, who is also a noted conductor. The Tchaikovsky concerto is a piece that doesn’t need much introduction, being a favorite of the repertoire for its expansive melodic qualities and bold manner. This particular performance came off less lush than often heard, but in doing so set a framework that really emphasized the part of the soloist. Znaider’s playing has a fine tensile strength to it, anyway, even in the music’s most sweet and melodic passages, and was clearly heard throughout.

Of interest in that light is that Znaider’s violin is the “Kreisler” Guarneri “del Gesù” of 1741, on extended loan from the Royal Danish Theater. It used to be a concert instrument of the legendary violinist Fritz Kreisler, although the violin most closely associated with Kreisler was a different one owned by the Library of Congress in Washington, DC, the 1733 “ex-Kreisler” Guarneri “del Gesù” from when the violin maker Guarnerius was at the height of his career. Nevertheless, the 1741 instrument that Znaider plays, as he said in a 2007 interview, “is absolutely extraordinary in the power and the warmth of sound that it has.” Those characteristics showed well in this performance — a good match of instrument for Znaider’s capabilities and style. The run-up to the concerto’s end proved especially engaging.

Znaider closed the concert with an encore, a moving performance of the “Sarabande” from J.S. Bach’s Partita No. 2 in D minor, giving the program comprising mostly “bigness” of character a sweetly intimate and thoughtful ending.