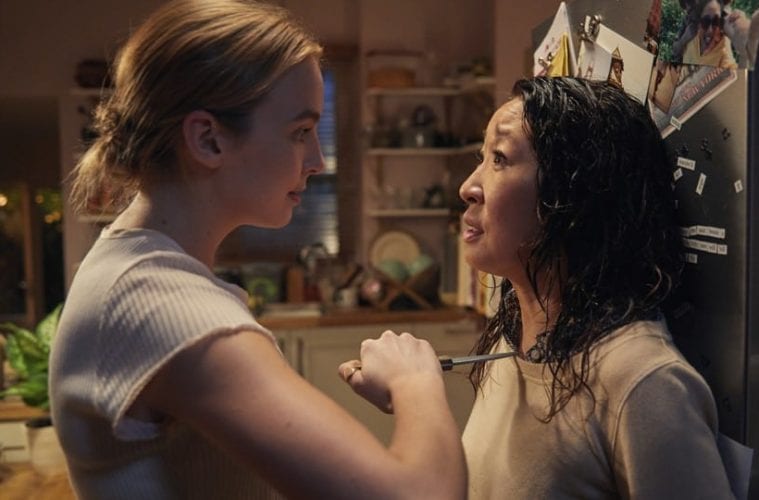 Review: What to see (and what to avoid) this month streaming on Netflix, Amazon Prime

As a longtime lover of actors Sandra Oh and Fiona Shaw, and a big new fan of writer-director Phoebe Waller-Bridge (of Amazon Prime’s Fleabag), Killing Eve on BBC America couldn’t have been greater catnip to me. I bought the first season on iTunes to watch, and it was worth it.

A sleeper hit that just finished up its eight-episode run (and got picked up for season two before the first episode even aired), it’s based on novellas by Luke Jennings and overseen by Waller-Bridge as a producer and scripter. Oh stars as Eve Polastri, a competent but bored ex-pat American employee of British security agency MI5. When she manages to bungle a witness protection scenario in episode one, she actually gets promoted, secretly, for the mistake.

She’s recruited by spy agency MI6’s legendary operative Carolyn Martens (Shaw) for an off-the-books mission to track a scarily accomplished young contract killer, code name Villanelle (Jodie Comer). If Eve is a dutiful, drab bureaucrat, Villanelle is her opposite — a manic pixie deathgirl who lives in a sprawling but half-furnished Parisian apartment and enjoys expensive couture almost as much as she relishes her kills. The two women are opposites but in some ways spiritual sisters, a female Janus.

That’s the thematic novelty that elevates this distaff take on what otherwise would be a standard, airport-paperback spy thriller. (The male characters, with possibly the exception of David Haig as Eve’s colleague Bill, tend to be extraneous or expendable.) Oh and Shaw are fabulous. And though I had some initial problems with Comer’s giddy-lethal routine, I wound up appreciating her work tremendously after I checked out her antithetical performance in Amazon Prime’s 2016, five-episode miniseries Thirteen. 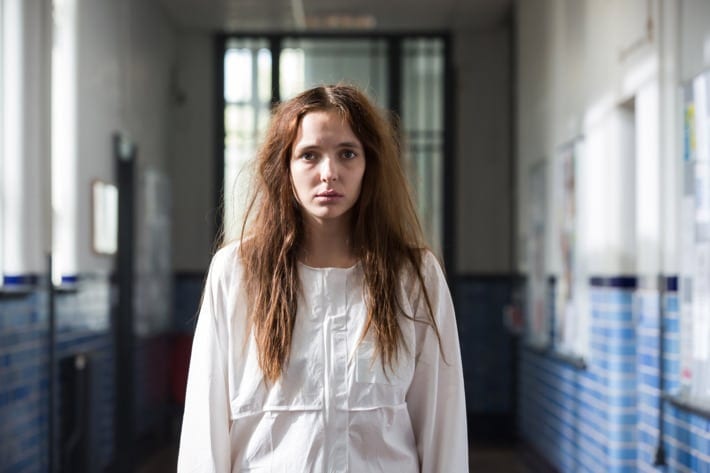 In Thirteen, Comer plays Ivy, a 26-year-old woman we first meet bursting from a house in Bristol, where she’s been imprisoned by a sex offender for the past 13 years. The notion of the adjustments and obstacles Ivy faces in returning to the world — and family — she last knew as a teen is plenty enough for a long-form drama. But the makers lay on a thriller veneer. Ivy’s abductor escapes, snatches another young girl and under questioning from local detectives, Ivy’s story and credibility come under scrutiny.

All of this could work, but there are some questionable plot and character choices. (Ivy’s old teenage boyfriend in particular is a total tool.) Thirteen wastes a lot of time with shots of family members moping around, and the role of Ivy – an unreliable, quivering victim – is almost impossible to play. I give Comer props for selling it as well as she could. But seeing her performance in Killing Eve gives you the sense of exhilarating release, for the actress, the one her character in Thirteen is meant to experience.

Despite its unevenness, I made it through Thirteen. But I bailed two episodes into Amazon Prime’s six-part remake of Picnic at Hanging Rock. There may not be many people these days who’ve seen Peter Weir’s influential 1975 original film. Maybe that’s why the makers of the new miniseries figured they could get away with this boneheaded reworking of the material (based on a 1960s novel). A humid honey-dream of repressed, Victorian-era sexuality, trapped under layers of ivory-colored muslin and linen, Hanging Rock is the tale — fictional, but courting the idea that it’s fact-based — of four teenage, private schoolgirls who vanish without a trace on a Valentine’s Day picnic in 1900.

In his film version, Weir removed extraneous plot points and dialogue, deepening the enigma. I have no idea how the miniseries reboot winds things up, but I fear the worst. The frantic first two episodes are jammed with character backstory, overt sexuality, crazy-angle camera shots and a dragon-lady performance by Natalie Dormer as the school’s headmistress. She’s fun to watch, but like the rest of the series, she always seems this close to toppling into camp.

The filmmakers seem to be going for a Sofia Coppola-style tone. The series even adopts the bright pink lettering favored by Coppola in her posters for Marie Antoinette and The Beguiled. But Coppola’s Virgin Suicides paid a tonal homage to the original Picnic that the remake seems clueless to reproduce. It’s an ADHD epic that gives us shiny new puzzle pieces to a puzzle that isn’t meant to be solved.

Speaking of the unsolved — see what I did there!? — my second-favorite viewing experience, after Killing Eve, was the Netflix four-part documentary Evil Genius: The True Story of America’s Most Diabolical Bank Heist.

Cast your mind back to 2003. Remember that really freaky standoff in Erie, Pennsylvania, when a middle-aged pizza deliveryman named Brian Wells robbed a bank of $8,000, was almost immediately captured by cops and then was found to have his head locked inside a ticking bomb collar? Yeah, I’d sort of forgotten about that, too — mainly because no one was ever convicted for Wells’s (spoiler!) death. 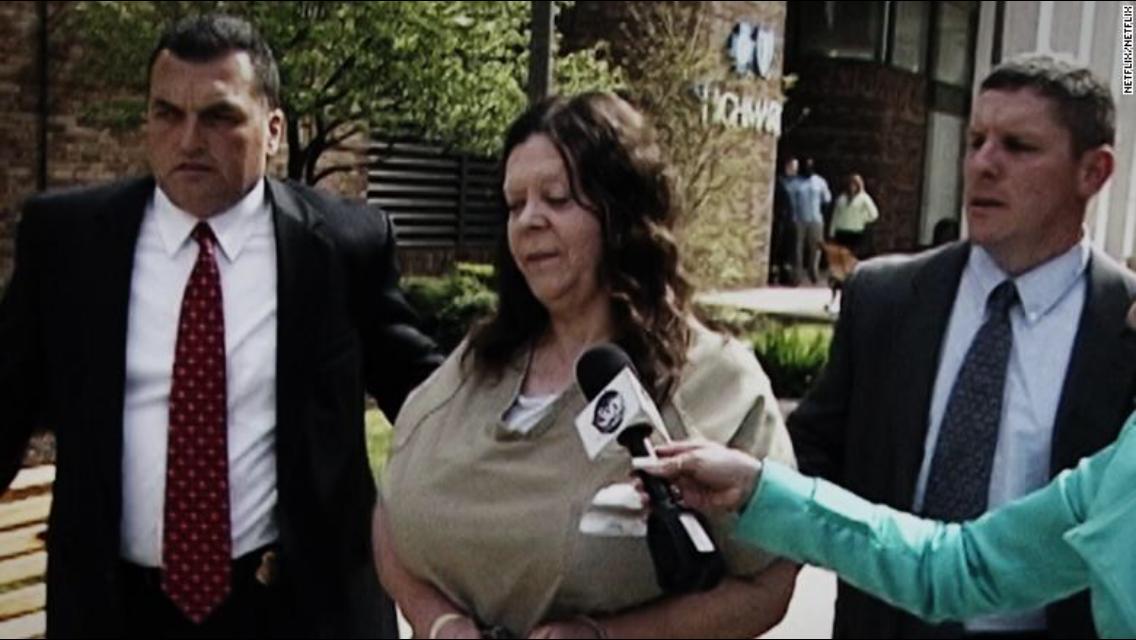 Evil Genius documents one of the most bizarre bank robberies of the past hundred years.

Directors Trey Borzillieri and Barbara Schroeder do a deep-dive into crazy here, focusing on two Erie residents with a byzantine personal relationship. Front and center is Marjorie Diehl-Armstrong, a brilliant crackpot with a string of exes who met bad, suspicious ends. Then there’s Bill Rothstein, Marjorie’s one-time fiancé who lives very close to the abandoned radio tower where Wells claimed he was locked into the collar bomb. Rothstein inserts himself and Marjorie into an already complicated police investigation when, a few days after the pizza-man robbery, he calls 911 to complain about the body of one of Marjorie’s boyfriends, now jammed inside his freezer.

It gets weirder. If you liked Wild Wild Country, consider sampling this latest documentary tour of Americana lawlessness. (Indie stalwarts Jay and Mark Duplass are exec producers on both series.) By the end of Evil Genius, a couple of people have been sent to prison for robbery and other charges. But the real truth — that is, who exactly in this rogues’ gallery was pulling the strings — is still not entirely solved.

On the fiction front, my taste for the apocalyptic has been partly sated by Danish sci-fi drama The Rain. Alba August, in an ingratiating, grounded performance, plays Simone, a young woman whose scientist father leaves her and her kid brother Rasmus in an underground bunker after a fatal, apparently lab-made rain starts to kill any human it falls on. Six years pass, Rasmus grows into a teenager (now played by Lucas Lynggaard Tønnesen), and the siblings are yanked back into the world by a band of other young people trying to survive a largely depopulated world. I’ve watched half of the eight episodes. While I’m not sure where it’s going, the young actors are engaging and I plan to see the series to the end. 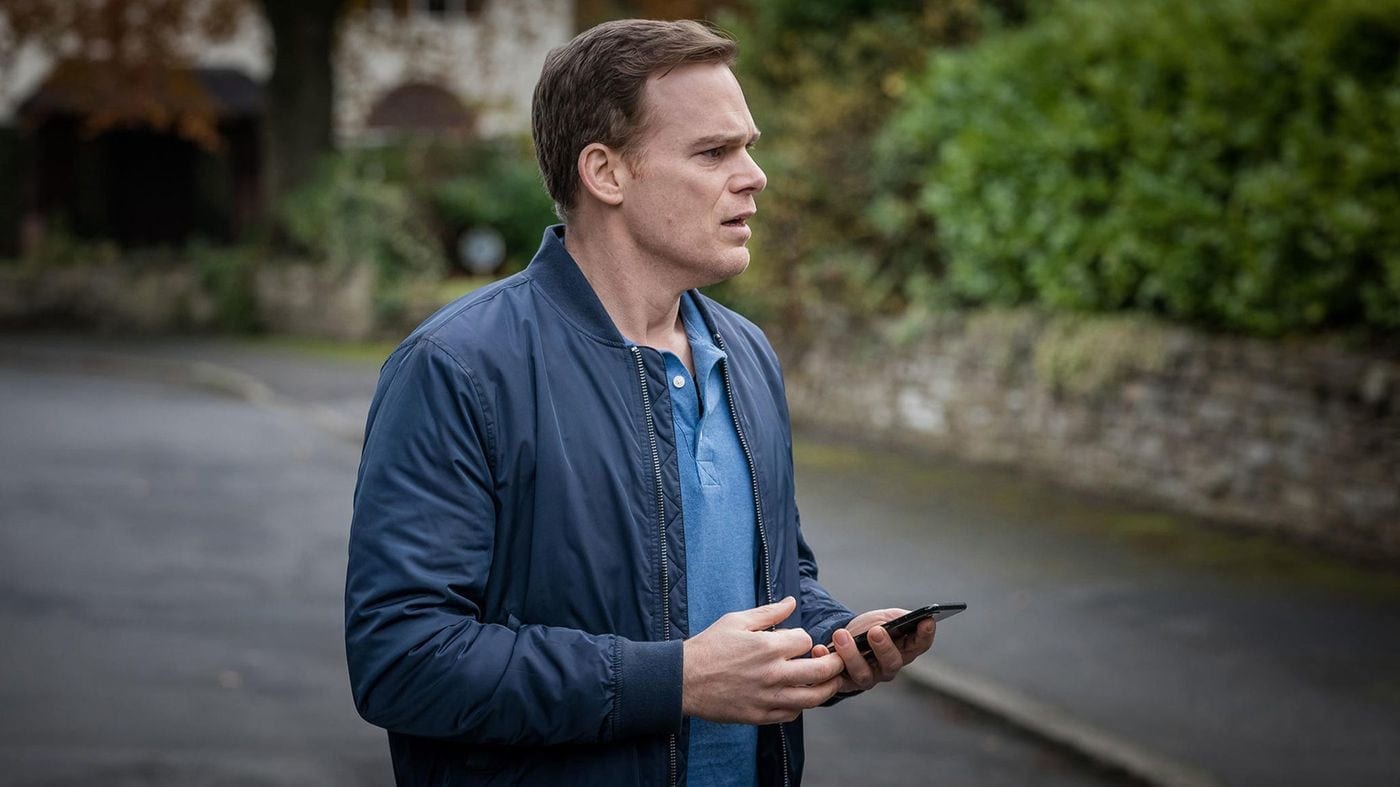 The same goes for Netflix’s Safe, a UK-set melodrama created by American bestseller Harlan Coben. (The author’s work, like the source material for Killing Eve, is basically disposable, page-turner stuff, but his novel Tell No One was transformed into art with the 2006 French film adaptation by director Guillaume Canet.)

Michael C. Hall plays Tom, a British doctor living in a gated community with his teen daughter Jenny (Amy James-Kelly) and her kid sister, all three recovering from the cancer death a year ago of Tom’s wife. Meanwhile, he’s sorta-secretly seeing neighbor Sophie (Amanda Abbington), a police detective. Sophie’s job becomes handy when Jenny sneaks out to a house party with her high school boyfriend Chris — and she goes missing, and he’s eventually discovered dead.

Some of the pleasures of Safe, at least in the half of the eight episodes I’ve seen, comes from the ant-farm effect of watching the microcosm of the gated community’s residents behave (and misbehave). The antics of a status-minded family, determined to hide Chris’s body and preserve their reputation, pitches the series toward Weekend at Bernie’s territory. And that’s okay.

Hearing Hall (aka that nice Fisher boy and that wily killer Dexter) deliver his lines in a British accent takes some adjustment. And halfway through Safe, I’m starting to suspect that its pile-on of soap-opera twists and revelations may be a case of diminishing returns. I’m interested enough to stick with it, though. 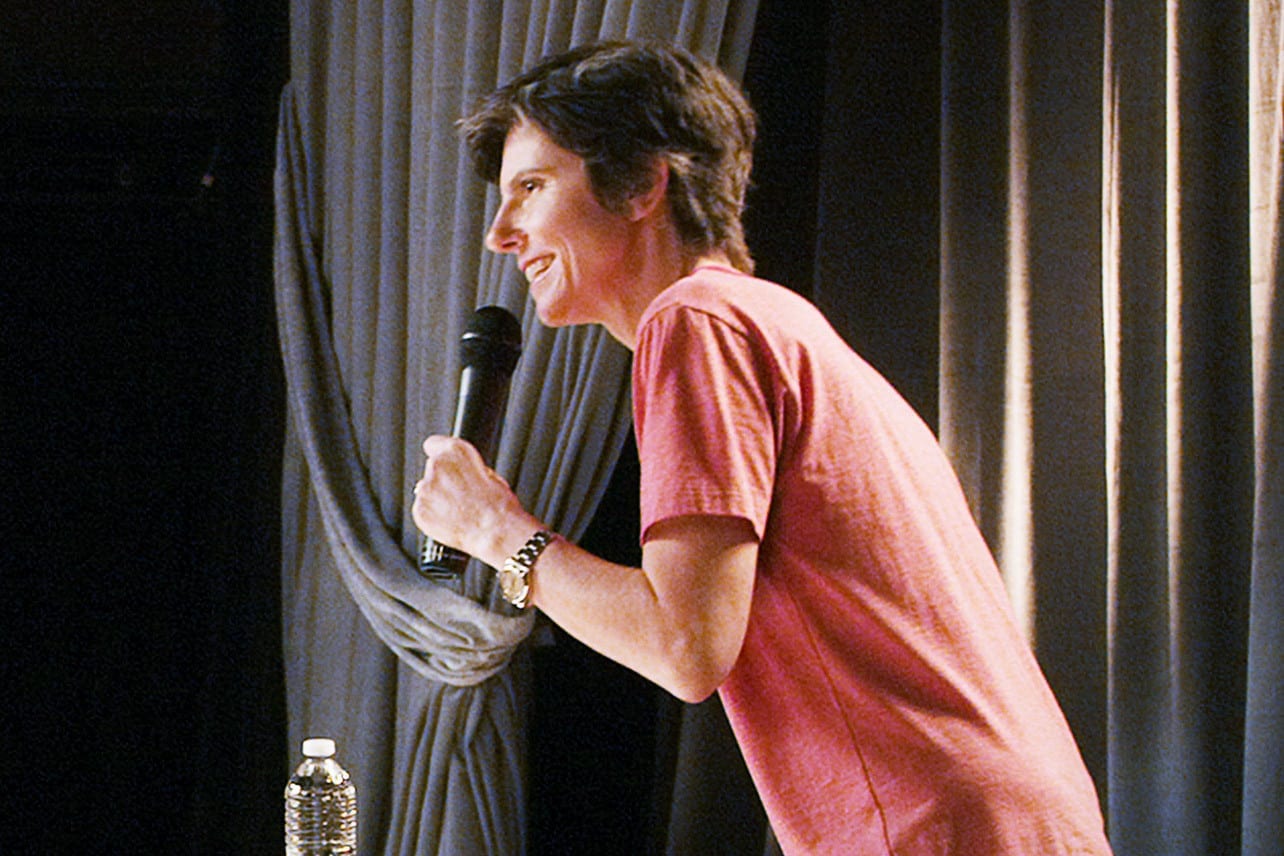 On the stand-alone front, I recommend Tig Notaro: Happy To Be Here, a one-hour performance by the comic. Famous for that patch of her life when her girlfriend broke up with her, her mother died and she herself was diagnosed with cancer, Notaro here celebrates a very different worldview in the wake of her marriage and motherhood of two young boys. That her wife is One Mississippi costar Stephanie Allynne only reminded me what a dumb move it was on Amazon Prime’s part to cancel her series after only two seasons. Happy To Be Here proves that, despite newfound happiness, Notaro’s desert-dry deadpan is still in full force. Her extended introduction (or is it a fakeout?) of a famous Atlanta musical duo, who may or may not be waiting in the wings, is a master class in screwing around with an audience.

Also on the Netflix original front, how could I let a month go by without another iteration of the zombie trope? This time it’s Cargo, an Australia-set drama starring the estimable Martin Freeman as a father trying to find safe haven for his infant daughter in a zombie-infested outback before an infectious bite transforms him into a brain-eater himself. Filmmakers Ben Howling and Yolanda Ramke expand their 2013, seven-minute short film into feature length by inserting a subplot about Australian aboriginals, and give Freeman a young girl as his native sidekick. However well-acted and well-meaning Cargo is, it doesn’t bring anything new to this exhausted genre.

The timing of these monthly roundups is such that I always seem to be filing the story just when a bunch of great new stuff is showing up in the streaming queue. For instance, though I was really mixed on season four of Arrested Development on Netflix, I’m willing to give season five a look. And though I’m way behind on this show as well, I’m delighted there’s a new season on Netflix of Unbreakable Kimmy Schmidt. I’m sad it’s the last one, but just as grateful that the showrunners no longer feel obligated to squeeze every last ounce of sub-par pate out of their golden geese. Some stories need to end when they need to end.