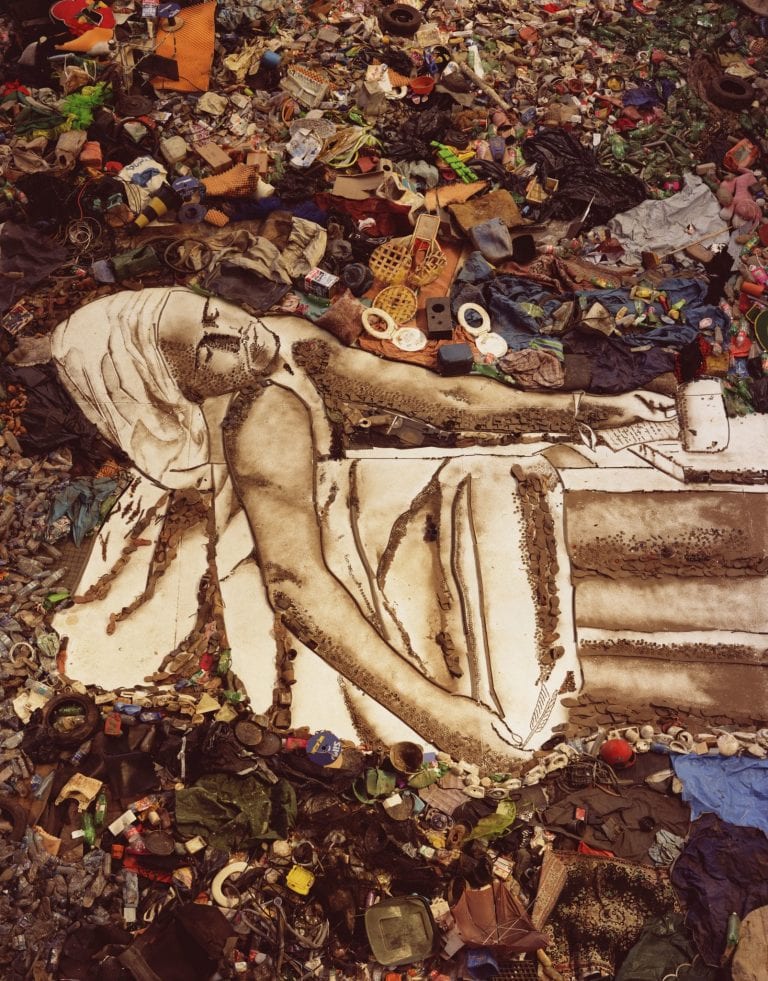 Review: Vik Muniz reveals himself through his dizzying array of “photographic delusions”

Meandering through landscapes of clouds and dirt, wire and string, postcards, caviar, peanut butter and jelly, and the detritus of modern consumption, Vik Muniz presents a dizzying array of “photographic delusions” on display at the High Museum of Art through August 21, 2016. This exhibit is a  mid-career retrospective, co-organized by the Foundation for the Exhibition of Photography and the High Museum. The 25 years of Muniz’s various series of work presents a modern take on long-since passed artistic periods, with Muniz at the helm of each electrifying and inventive expedition. Where Picasso’s Blue Period (1901-1904) focused on an exploration of a particular color palette or his African Period (1906-1909) created a body of work influenced and inspired by African sculptures and tribal masks, Muniz reimagines easily recognizable artworks and original designs through materials that enhance their familiarity and illuminate their nostalgia. With each one- to two-year series, Muniz displays an intense analysis of subject and medium, heightening his iconic source materials to reveal new meaning for a contemporary audience.

There is at once a somber reverence and a jovial tongue-in-cheek quality to Muniz’s photographs. Utilizing an assortment of materials to produce three-dimensional (re)creations, harking back to his artistic roots as a sculptor, Muniz flattens the plane through the click of his camera. Through this, he presents his viewer with images of pop culture as consumables, as in Warhol’s “Colored Mona Lisa” becoming Muniz’s own “Double Mona Lisa (Peanut Butter and Jelly)” (1999) from the After Warhol series, 1999-2000. Commentaries on war, its effects, and cultural pervasiveness are invoked in his Monads series (2003) as children’s toy soldiers become a single army within their arrangement as a young Civil War soldier (“Toy Soldier”), a war horse (“Horse”), and a Native American chief (“Old Cheyenne”). Muniz proves to be a master of decontextualization. In his Albums and Postcards from Nowhere series (2015), snapshots and postcards rip apart like fragmented memories and revive as scenes that are universally nostalgic. In each series of Muniz’s photographs, the relationship between subject and material is heightened, allowing the viewer to journey through nostalgia, pop culture, and art history in sentimental and innovative ways.

In a quote prominently displayed as wall text among the exhibition’s five-room expanse, Muniz expounds upon his use of photography as his culminating medium: “Ink and photo-chemicals are the last material substances still capable of playing a role in the dissemination of information.” Muniz’s photographs, within their reminiscence, offer a fascinating look at the contemporary, proving that there is still so much to learn from each piece. The viewer is beckoned in, asked to stand back to observe the greatness and reverence of Leonardo da Vinci’s “Leda and the Swan,” recreated in nuts, bolts, and other Pictures of Junk (2009), before moving in closer to the frame to find each particle of debris as manifest to the story. A prone Barbie Doll marks the scenery beside Leda’s leg; a rusted red metal container becomes the phallus of Zeus in his swan guise. Each vantage point of each photograph allows the viewer to create a new story, to learn more about its (and their own) history, and to reconfigure their conceptions.

Muniz’s work revels in abundance. It shows a modern moment in which art is everywhere; created from everything, and interdisciplinary in nature. “Pictures of Wire” (1994-1995) appear simultaneously as line drawings and sculptures; skywriting jet streams become “Pictures of Clouds” (2000) that toy with a temporal flatness and a vanishing dimensionality; and the brushstrokes of a painting become the frayed edges of collage in “Pictures of Magazines 2” (2012). Muniz’s playful studies in materiality become all the more apparent in this retrospective, with each piece of each series confronting the viewer in new and unexpected ways.

Through photography, Muniz offers a look at sculpture in contemporary society. In our digital age, it is all too common for revered sculptural works to become flattened into pixels, viewed only from a single-point perspective in textbooks and on museum websites. Muniz seems to relish in this phenomenon through his art, eliminating the middle-man from the equation, and showcasing a vibrant three-dimensional piece the way he knows it will ultimately be viewed. His ecstatic peaks and valleys of scale shine through his lens, allowing us a vision into the artist’s mind, to see precisely how each work was intended. Muniz effectively proves the “dissemination of information” through photography, showing that the “medium” is indeed “the message,” and that the message itself is vast.