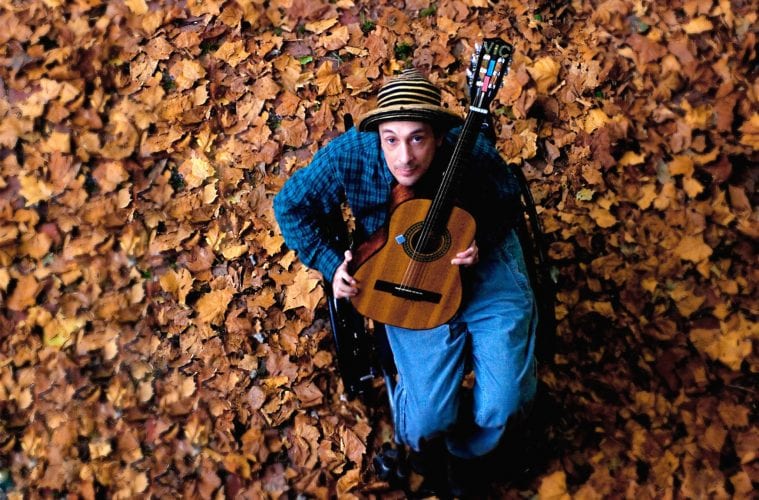 When singer/songwriter Vic Chesnutt died on December 25, 2009, in Athens, Georgia, he was no longer just a local cult figure in the college town’s indie music scene but a nationally renowned artist who had collaborated with such disparate musicians as Jonathan Richman, Bill Frisell, Emmylou Harris, Widespread Panic and Van Dyke Parks.

If anything, Chesnutt’s fan base has grown even greater since that time, and he continues to inspire homages from musician friends such as Cowboy Junkies, whose 2011 album Demons is a tribute to the man.

Now we have the memoir Don’t Suck, Don’t Die: Giving Up Vic Chesnutt by Kristin Hersh (University of Texas Press), which will be available on October 1.

Hersh, who is known as the instigator behind the bands Throwing Muses and 50 Foot Wave, previously published Rat Girl (2010), a diary-like account of her formative teenage years during 1985-86. But her new book is focused exclusively on her friendship with Chesnutt during the years they toured together in the mid-1990s right up to the last time she saw him at a R.E.M. tribute show at Carnegie Hall in March 2009. Hersh will appear at the Highland Inn Ballroom Lounge at 7 p.m. on October 2 for a book signing and conversation with Chad Radford, music editor of Creative Loafing.

How does one describe Vic Chesnutt to those who never heard his music or saw him perform? The best advice is to send them back to his prodigious catalog of songs to hear what made him so distinctive: the reedy but evocative vocals with a Southern gothic tinge; the playful phrasing that could give new meaning to familiar words; an offbeat, self-taught guitar style full of unexpected rhythmic shifts and pacing; emotionally resonant lyrics that are brutally honest (usually self-directed), wickedly acerbic, profound or profane, often in the same song.

When Hersh first got to know Chesnutt well, she was launching her own solo career and he was her opening act. The memoir, however, is not a conventional chronicle of life on the road with the expected clichés of the rock ‘n’ roll lifestyle. Instead Don’t Suck, Don’t Die charts the prickly and mercurial dynamic between Hersh and Chesnutt as they toured with Hersh’s manager/husband at the time, Billy O’Connell, and Chesnutt’s wife, Tina.

Hersh’s approach is confessional. She addresses her subject directly as if they were in conversation.

“The first time I saw you play, I watched snowy white wings unfold behind your wheelchair, poking out of your lumberjack plaid, as a 6-year-old boy morphed into a 90-year-old man and back again…The sound you made was…I’m gonna say ‘perfect’ because you aren’t around to hear me say it. Also because you played bass, lead and rhythm in the same song, with only two fingers. Never heard anybody else do that before or since.”

Chesnutt, who was left partially paralyzed after a car crash at 18, was usually ambivalent about discussing his work or explaining the meaning of songs. In one of the more memorable accounts, Hersh reconstructs an amusingly obtuse Q & A session with a stymied reporter:

Me [Hersh]: “He means that you could measure.”

You: “Songs ‘re unhappy accidents, mutations.”

Journalist: “Kristin? Do you agree?”

In many ways Hersh and Chesnutt were well suited as soulmates because of a shared history of traumatic events in their lives which helped shape who they were. Hersh writes, “That car accident left you with exactly — and only — what you needed. What you needed to do this, to play songs that were just a little bit too much. Oddly, a car accident was what made me play music, too. Not a lifetime in a wheelchair, but as you used to say, ‘Time spent on your ass is time invested.’ My accident made me hear songs, yours made you play them.” The friendship depicted in Don’t Suck, Don’t Die is not sugar-coated or sentimentalized. Hersh takes a tough love, warts-and-all approach that is often hard on both the narrator and her companion. Chesnutt emerges as a complicated and troubled human being who learned — against all odds –how to summon up every physical and mental resource he had to express the intense feelings and thoughts that were bottled up deep inside him. Chesnutt once told a Rolling Stone reporter, “I guess the very emotional nature of my songs attracts emotional people, and they become quite, um, emotional.”

You could say the same thing for Hersh’s memoir in which the author shares her most private feelings and thoughts about a close friendship that never had proper closure. Hardcore fans of Chesnutt and Hersh should find the memoir both moving and insightful, depending on how they respond to Hersh’s intimate and highly idiosyncratic storytelling style.