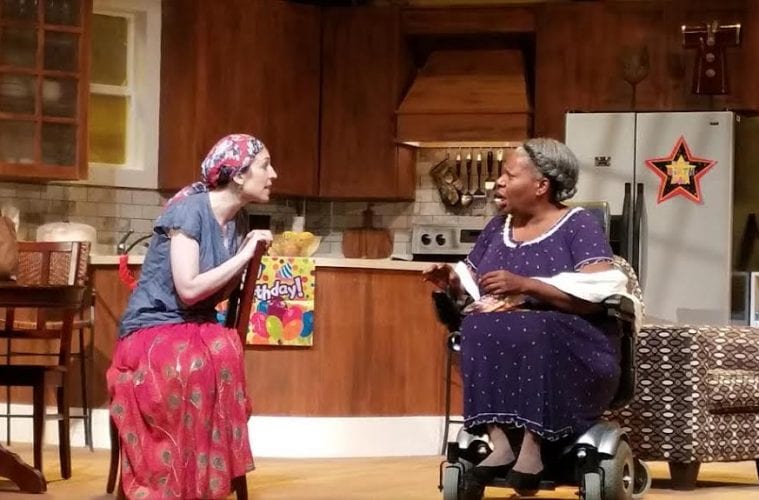 Review: “Jar the Floor” smartly chronicles the push and pull of mother-daughter relationships If resentment is like drinking poison and waiting for the other person to die, then the four generations of women in Cheryl West’s dramatic comedy Jar the Floor have definitely overdosed. Luckily, they have enough wit, laughter and love to keep living, even when they are getting on each other’s nerves. Dominion Entertainment Group’s production of Jar the Floor runs through October 3 at Southwest Arts Center.

MaDear (Bernardine Mitchell) is turning 90, and her wish is to have her daughter Lola (Donna Biscoe), granddaughter MayDee (Cycerli Ash), and great-granddaughter Vennie (D. Woods) all together for her special day. She has been living with her granddaughter — the reserved, detached college professor in Illinois — but desperately misses her home in Mississippi.

And no one has seen Vennie in a couple of years. MaDear’s wish is granted, but when Vennie arrives with her white girlfriend Raisa (Cara Mantella), personalities clash and family secrets come out before the candles are lit on the cake.

West’s play, which was written in 1991, is very funny and packed with punchy one-liners. She deals with mother-daughter relationships, sexual abuse, single motherhood, cancer and memory loss in a way that feels very true to life.

Robert John Connor, also Dominion’s artistic director, directs the play as more of a drama than a comedy, however, which does not fully serve the text or this cast of outstanding actresses who Atlanta audiences are used to doing stellar work.

Mitchell is hilarious as MaDear, even in her most sincere moments, but the jokes often fall flat because the production as a whole does not carry the energy of a comedy. Connor over-relies on scenes where the women are talking over each other and building into a cacophony of noise, and the tension does not build in a way that works.

Judging from the way these women bounce back from the harsh words that they say to each other, it is clear that this is not the first time that they have argued like this. They do not attempt to hide it in front of Raisa, however, who is let in on all of the family business from the moment she walks in the door. This does not ring true, especially after the hilarious reaction they have when a white woman with breast cancer walks into the house on MaDear’s birthday.

There are also moments that are glossed over too quickly. In one of their many arguments, MayDee says to Vennie, “I just wanted you to be proud of me,” and Vennie replies, “I am. I just don’t know you.”

The audience needs time to sit with these big revelations. Woods and Ash do nail their big, final argument, however, and it is totally heart-wrenching. Woods is believable as the stereotype of the entitled millennial that everyone holds disdain for, and MayDee is the conservative guilt-tripping single mother who can’t quite understand how she raised a daughter who is her complete opposite.

This is a recurring theme in the play, with Biscoe as the dance-loving Lola in contrast to MayDee. Biscoe plays Lola as if the song “Whatever Lola Wants” was made for her, and this character is less buttoned-up and more raw than her usual roles (audiences last saw her in Theatrical Outfit’s Storefront Church). She talks about sex and accepting gentleman callers, even as she looks after her elderly mother.

Opposites attract in the best way in the scenes between Raisa and MaDear, which are delightful to watch. Mantella and Mitchell make these two seem like old friends who have deep compassion for each other.

Even though it seems that after the wax melts, these women will go back to business as usual — tip-toeing around each other in order to avoid facing and dealing with the pain of their pasts — Jar the Floor has a great cast and is a play that mothers, daughters, and girlfriends can bond over.